According to Bill Monroe, senior manufacturing engineer for Urschel, the company machines parts for the food processors at its only manufacturing facility, located in Urschel’s 350,000-sq.-ft. headquarters. Urschel produces many of these workpieces in its two foundries. “We have a no-bake foundry and an investment foundry,” Monroe said. 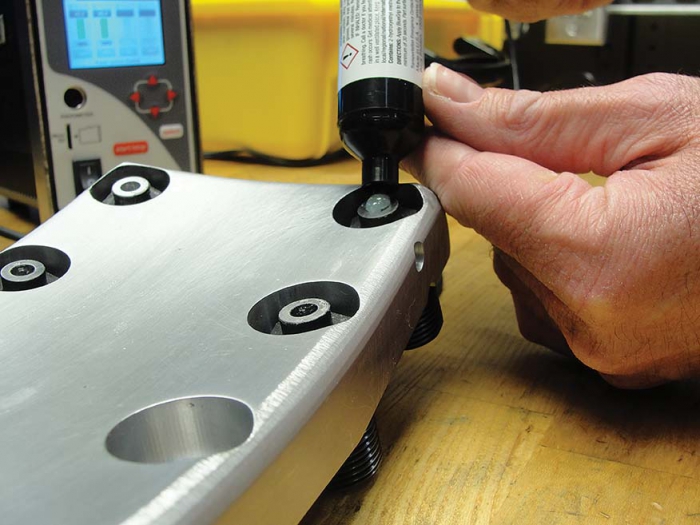 Adhesive is applied to the gripper head of a Blue Photon photo-activated adhesive workholding system. Image courtesy of Urschel Laboratories.

As part of a major new project that Urschel, Chesterton, Ind., started late last year, Monroe needed to hold a 300-series stainless steel billet that was convex on one side and then access five sides when machining it on a 5-axis machine. Coincidentally, he received an unsolicited email at the time from Blue Photon Technology & Workholding Systems LLC, Shelby, Mich. The email, which didn’t get permanently deleted like all his other junk messages, promoted Blue Photon’s photo-activated adhesive workholding system for machining delicate or hard-to-hold parts.

“I thought, ‘Wow, that is a really good opportunity for this casting,’” Monroe said.

According to Blue Photon, the workholding system has patented grippers that hold the workpiece. The company’s BlueGrip adhesive fills the gap between the gripper head and the workpiece surface. Ultraviolet light applied through the solid, transparent light guide that runs through the center of each tubular gripper polymerizes the adhesive. This workholding arrangement accommodates irregular shapes and textured surfaces, freeing the workpiece from clamps and vise grips while eliminating the need for designing additional workholding features into the workpiece, such as lugs or dovetails.

Urschel Laboratories tested the Blue Photon workholder on the billet and determined that it performed well, Monroe said. The parts manufacturer soon developed a near-net-shape prototype casting and successfully used the workholder to machine five sides of the part without having to refixture it. “You always want to hold a part completely free but completely rigid at the same time,” he said. “By gluing it down, we are able to get that.” 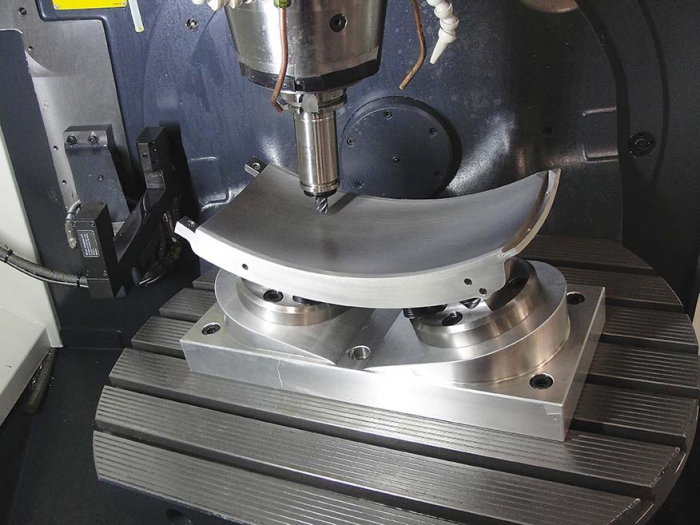 A stainless steel casting held by the Blue Photon photo-activated adhesive workholder is machined in a 5-axis machine. Image courtesy of Urschel Laboratories.

The casting features a partial sphere with a 12" (304.8mm) radius and a flange around it for strength, Monroe said. Urschel uses eight grippers to hold the part, and Monroe estimated that each gripper secures about 4 sq. in. (101.6 sq. mm) of part surface.

Monroe added that it takes about a minute to polymerize the adhesive, which operators apply manually via a hand-held syringe in a fairly consistent manner. After a part is machined, each gripper is turned to shear the adhesive bond via torsion. The adhesive usually sticks to the part and is removed by applying steam.

Monroe explained that without photo-activated adhesive workholding, Urschel would have had to design and build several hard fixtures to clamp each part and risk distorting the part. Not only would the hard fixtures add expense, compared to the adhesive system, but creating them would also have been time-consuming. “We easily saved a month for fixture design and build,” he said. “Blue Photon wasn’t the only way to do it, but it was probably the cheapest and best way for the part.”

After Urschel completes the R&D phase of the project, Monroe said the company plans to add a second adhesive workholding system for the production phase, which should generate about 80 parts per quarter. A second system will enable Urschel to dismantle the workholder from one part and set up another part while a third part is being machined.

CHALLENGE: Hold a near-net-shape casting for machining on five sides.

SOLUTION: A system that uses grippers, adhesive and UV light to hold workpieces.