While flood coolants have traditionally been used almost exclusively in machining operations, the concept of minimum-quantity lubrication has been steadily gaining momentum during the last several years. MQL, also known as near-dry machining, replaces flood coolant with a minute amount of high-efficiency lubricant applied precisely to the cutting tool/workpiece interface. The process has proven effective for machining all nonferrous metals and most grades of steel. 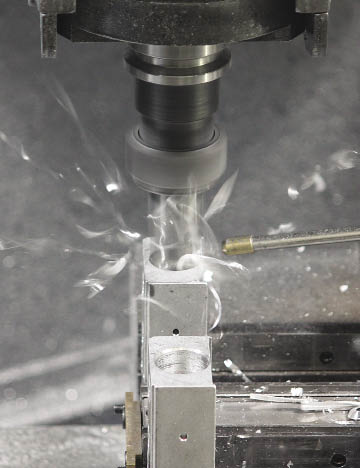 MQL uses precise fluid application coupled with a high-quality lubricant, such as in this step-drilling operation.

The most common lubricants for this process are biodegradable vegetable oil derivatives, which, because of their polarity, are known for their extensive friction-reducing properties. Unlike mineral-based and synthetic fluids, vegetable-based fluids are developed in the presence of oxygen, which causes them to organize and align better as they bond with the surface of metals, providing superior lubricity. These fluids, when properly applied, significantly reduce the friction and corresponding heat created when cut metal slides over the cutting tool before breaking off and becoming a chip. Reducing that friction not only extends tool life, but also eliminates the need for cooling the tool with flood coolant. Additionally, the amount of fluid used is often less than 8 oz. per shift, which is either consumed in the cut or remains as a light film on the part and chips.

The Benefits of MQL

The benefits of MQL are almost all a direct result of eliminating flood coolant, including:

• Reduced production times due to the higher feed rates MQL allows. Depending on materials and processes, feeds can be 25 to 100 percent faster.

• No treating and replacing old or rancid coolant

• No disposal costs for old coolant

• Clean finished parts with a light film of protective oil

• The entire process is environmentally friendly, i.e., there is no fluid to treat, recycle or dispose of. The fluid itself is 100% biodegradable, and is consumed in the process.

There are many ancillary costs associated with the use of flood coolants—typically 15 to 18 percent of the total manufacturing cost of machined parts. Switching to MQL can typically reduce that number to around 5 percent, while increasing tool life and feed rates (see items one and two above).

Because it is different than traditional cooling and lubricating methods, MQL has been slow to gain acceptance. Machine builders as well as machinists are accustomed to the way things have always been done. As a result, the initial markets to readily accept MQL were applications where flood coolant simply wasn’t feasible. Although this is changing somewhat, there are still industry reservations.

MQL has become commonplace in most sawing operations and has replaced flood coolant in many applications. This transition was prompted by the saws’ open design and their application in cutting tubes, structural shapes and extrusions with hollow profiles. Flood coolant, flowing over the saw blade, naturally migrates down the part being cut and onto the floor.

A simple MQL system can be easily retrofitted on almost any circular saw or bandsaw. These systems typically use one or two external nozzles, which spray into the gullet of the saw teeth prior to the cut. In many cases, special nozzles with multiple outlets made specifically for saw blades make the installation clean and effective. In the case of band saws, the MQL fluid serves double duty as a guide lubricant on the blade sides.

Sawing is an ideal application for MQL.

Although MQL is effective in most sawing applications, it is more common on larger saws because the cost to retrofit is small compared to the cost of the saws, and the production benefits are great. The average cost to retrofit is less than $2,000, and when blade cost, fluid cost and maintenance benefits are considered, the ROI can be as little as 2 months, depending on production volumes. Smaller saws, while still being able to benefit from MQL, are less commonly converted because of the comparatively higher cost of conversion.

CNC routers are also commonly equipped with MQL systems from the factory due to their open-bed design. Those that aren’t equipped with MQL by the builder are typically sold without any cutter lubrication system and are intended to run dry. These machines can easily be retrofitted in the field with a single-nozzle MQL system where the nozzle is mounted to the gantry and aimed down at the cutting edge periphery of the tool. Feed rates can be increased by up to 50 percent while the surface finish is simultaneously improved because of more consistent lubricity during the cut. Because cutters last two to four times longer using MQL, a significant amount of downtime for tool changes is eliminated as well.

MQL has been widely accepted and embraced by the aerospace industry on large gantry mills used to machine spars out of solid aluminum or titanium. Because the machines are so large, it is impossible to contain them for flood lubricant application. As a result, MQL has become the preferred lubrication method, with one or two external nozzles applying small amounts of lubricant. Vacuum systems typically evacuate the chips.

MQL has also proven its effectiveness in the operation of portable positive feed drills. These drills are commonly mounted in large fixtures to drill and ream holes during the assembly of aircraft spars and fuselages. The drills are typically equipped with through-coolant tools to direct fluid to the cutting edge. In the past, water-soluble coolants were used for this application until the effectiveness of MQL was discovered.

In these applications, a sensor determines when the air motor on the drill is started. When the motor starts, a metered mixture of air and oil is automatically delivered to the cutting tool through a coaxial hose with a fluid tube routed inside an air line. The air and fluid are mixed just before they enter the cutting tool. Consistent air pressure should be maintained throughout the cut so the fluid flow and chip evacuation remain constant. Systems like these have been used successfully not only in the aerospace industry but also in the shipbuilding industry for more than 20 years.

MQL is also effective in tapping. Because taps are buried in the workpiece when they’re cutting threads, they require a lubricant—not a coolant. For dedicated tapping machines, such as lead screw tappers, a special MQL system provides a single shot of fluid mixed with a small amount of compressed air to the tap just before the mixture enters the hole. These systems provide the same quantity of fluid to the tap during each cycle using a small nozzle aimed at the side of the tap near the tip. Multiple taps can be lubricated simultaneously or sequentially by applying a multiple-nozzle system and limit switches or a PLC.

Minimum-quantity lubrication can also be effective on CNC turning centers, but the ease of application depends on the design of the machine turret. The best way to supply MQL to turning centers is through the same fluid path to the turret typically used for flood coolant.

A single-outlet MQL system is typical but the oil is not mixed with the air until it is as close to the turret as physically possible. At this point, the oil is mixed with the air to create a mist that is carried through the turret passages. This mist can be directed to the tools externally through small stainless steel nozzles or internally through boring bars or modified toolholders.

When turning, the tool is submerged in the workpiece material for significant periods of time. As a result, it is often more effective to apply the lubricant to the backside of an insert where some of it will migrate to the cutting edge and some of it will adhere to the workpiece until it meets the cutter on the next revolution. Because chips fall away from the cutter/workpiece interface on turning centers, there is no need for coolant to help evacuate chips.

Vertical machining centers pose one of the bigger challenges when converting to MQL because of the horizontal position of the workpiece, where chips tend to accumulate. There are two ways to apply the lubricant to the cutting tool on VMCs: internally through the spindle when using through-coolant tools, or externally with a nozzle when the tools are too small for oil holes or the machine is not equipped for through-the-spindle fluid application. The preferred method is through the spindle because it directs the fluid to the cutting edges while the air carrying the fluid effectively blows the chips from the cutting area so they are not recut. 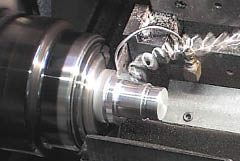 MQL being applied through the turret in a turning operation.

When external application is the only option, the effectiveness of MQL can be greatly improved by adding a separate blow-off nozzle to evacuate the chips. The blow-off nozzle is typically required when milling pockets where chips tend to accumulate and would otherwise be re-cut. Other operations, such as drilling and tapping, can usually be accomplished without using a chip blow-off nozzle. In the case of deep-hole drilling without a through-coolant drill, the effectiveness of the operation can be greatly improved by pecking the drill, which reapplies lubricant as it drills deeper. A programmed cycle to blow the chips off the entire workpiece can easily be integrated so the entire part is chip-free during unloading and subsequent reloading.

As environmental pressures grow, the benefits of minimum-quantity lubrication will become more apparent. The future of U.S. manufacturing depends on individuals with open minds who can prove to the world that American manufacturers are still the best and most innovative in the world. The change from flood coolant to MQL will not only make manufacturing operations leaner, but will also keep the world greener. CTE

About the Author: Chuck Boelkins is president of Unist Inc., Grand Rapids, Mich. He has a BS degree in Mechanical Engineering from Calvin College and has worked extensively in the field of lubrication technology for metal cutting and metal forming since 1993.

Chuck Boelkins is president of Unist Inc., Grand Rapids, Michigan. He has a B.S. degree in Mechanical Engineering from Calvin College and has worked extensively in the field of lubrication technology for metal cutting and forming since 1993.