If you use a pair of machinist’s vises bolted to the bed of a vertical machining center and laboriously replace jaws for each new job or build fixtures from scratch and stick them on the shelf until the order repeats, listen up: Modular workholding saves time and money. 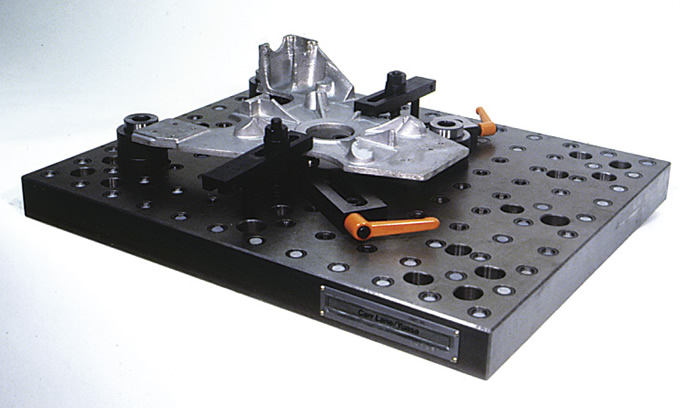 Irregularly shaped parts, such as this casting, can be clamped directly to a modular baseplate. Image courtesy Carr Lane Manufacturing.

Merriam-Webster defines modular as “having parts that can be connected or combined in different ways.” But to Colin Frost, chief business development officer at Carr Lane Manufacturing Co., St. Louis, modular means the ability to quickly and easily fixture most any job that comes through the door.

“For us, modular starts with a superaccurate, grid-style baseplate, tool block or angled plate that contains a series of bushed holes,” Frost said. “We use a hardened-steel threaded insert with a locating bushing over that, so customers can clamp and locate in the same hole.”

The company’s offerings include a seemingly endless assortment of mounting blocks, locating pins, adapters, clamps, stops, risers, rests and supports that either bolt directly to the baseplate grid or to one other. These components are available individually or in one of several “starter sets.”

“Modular fixturing kits are popular with shops that manufacture a variety of low-volume, complex parts on an infrequent basis, when a vise is unsuitable,” he said. “For example, we have a customer in Iowa that makes repair parts for agricultural equipment. Some of this is quite old, and, since they obviously don’t want to keep tooling on the shelf for 30 or 40 years, they use modular components to build whatever fixture is needed at the time, then tear it down when the job is done.” 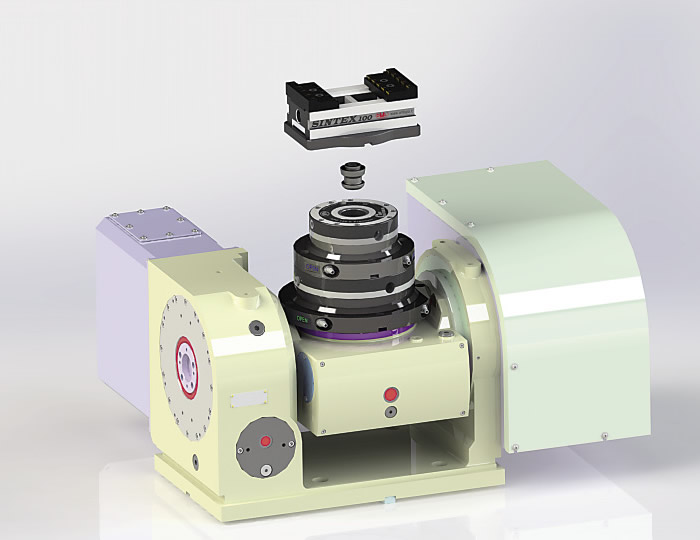 Modular workholding extends to 5-axis machining as well, such as this a zero-point system that’s used to attach a quick-change vise. Image courtesy Fixtureworks.

Frost said the fixture design for each part is recorded by photographing the complete assembly or laying it out in a CAD system. Each part is referenced on the baseplate’s “hole address,” so if a customer orders that part again 5 years later, the fixture doesn’t have to be recreated from scratch. “This is one area where modular fixturing really shines.”

Modular kits are the Tinkertoy sets of the toolroom and can cost $20,000 or more. Because of the large number of parts and the myriad ways to assemble them, Frost said it’s important that somebody understands what all the pieces are and how to use them and properly manages the investment.

Many job shops, however, aren’t willing to make such an investment. One way to reduce costs is to make a subplate from MIC-6 cast tooling plate, then install application-specific threaded inserts or bushings. This can then be used to mount risers, blocks, vises and zero-point systems, without the hassle of T-slots.

Fixtureworks, Fraser, Mich., also supplies modular workholding components. Sales associate Bill Leto said most of the components can be reconfigured and repositioned to accommodate a variety of workpieces and jobs. They range from simple diamond-shaped locating pins to SpeedLoc locators to fully automated zero-point locators.

“One of the best ways to achieve flexibility and integration with modern machining centers is with quick-change fixturing products,” he said.

Leto said that the company’s automated locating and mounting system be used in conjunction with fixturing plates or the TRIMAX line of vises for 5-axis or production work. “With this type of system, customers can achieve quick changeover and automation by swapping out fixtures, vises and workpieces,” he said.

Darin Wion, vice president of sales and marketing for TE-CO Inc., Union, Ohio, agreed that vises are the preferred method of workholding in many shops, but, even when permanently mounted to the table, the vises can be more modular. 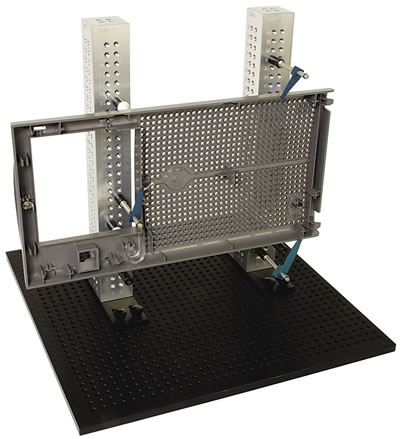 A variety of modular components can be assembled to hold almost any workpiece, even on a coordinate measuring machine. Image courtesy TE-CO.

“No matter what comes down the pike, the goal should be fast and flexible workholding,” he said. “One way TE-CO accomplishes this is with a broad offering of quick-change jaw configurations and modular fixture plates that can be mounted in or on top of vises. This meets the needs of shops that want to mount their vises and leave them there.”

TE-CO also offers a wide assortment of modular workholding widgets, but Wion said the company has moved away from the “erector set” kits it once sold in favor of an à la carte offering. “We still make all the hardware, we just found that most shops are unwilling to pony up thousands for a modular tooling package.”

Wion said those same shops are often reluctant to invest in zero-point systems, but hopes that will change soon because TE-CO introduced such a system at IMTS 2016, branded under its sister-company Raptor Workholding Products, Burbank, Calif.

“A lot of shops are stuck in the mode of single-station machinist’s vises,” Wion said. “It still amazes me that they’ll spend hundreds of thousands on a new machining center, one with all kinds of capabilities, and then use old-fashioned workholding technology. There are just too many good solutions on the market today to sell yourself short like that.”