What would cause parts manufacturers not to want to extend tool life, increase speeds and feeds, enhance chip evacuation to avoid recutting, impart finer surface finishes and eliminate pecking when deep-hole drilling?

“Ignorance in the marketplace,” Ron Parker said succinctly about the gains a high-pressure coolant system (HPCS) provides. “They feel they don’t need it,” added Parker, national sales manager for ChipBlaster Inc., Meadville, Pa., a manufacturer of HPCSes with fixed-rate or automatically variable-volume control.

“It’s an educational thing where sometimes people think 300 psi or 500 psi is good enough,“ he continued. “In fact, they cannot run production rates with those lower pressures as fast as they can with 1,000 psi.” 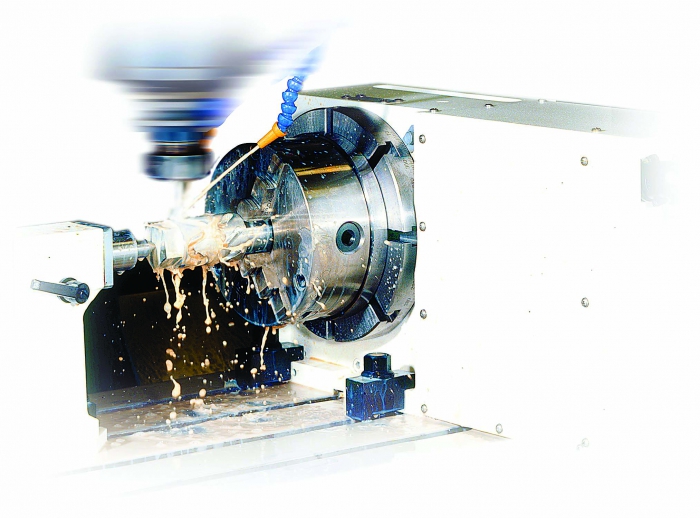 Parker said 1,000 psi (69 bar) is “truly” high-pressure coolant because that pressure is where the amount of force in the coolant stream that hits the part and tool is sufficient to penetrate the vapor barrier, or cushion of steam, that forms as the temperature increases past the point at which water boils (212° F or 100° C).

Breaking through the barrier enables the tool, workpiece and chips to be cooled, Parker said. “For example, 1018 steel chips do not turn blue anymore when you cut because at 1,000 psi the coolant actually pulls all the heat out of the process.”

Systems are available that supply high-pressure coolant at levels higher than 1,000 psi, as well as lower. For instance, Steve Smith, president of CNC Indexing & Feeding Technologies, said the Mason, Ohio, company offers four basic models: HPC-400, HPC-1000, HPC-1500 and HPC-2000, with each number indicating the unit’s highest psi. (The pressure for the HPC-400 ranges from 75 to 427 psi or 5.2 to 29.4 bar). “If you are cutting mild steel and aluminum, doing what I would call ‘general cutting,’ the 400-psi unit would be sufficient and more cost-effective,” he said. 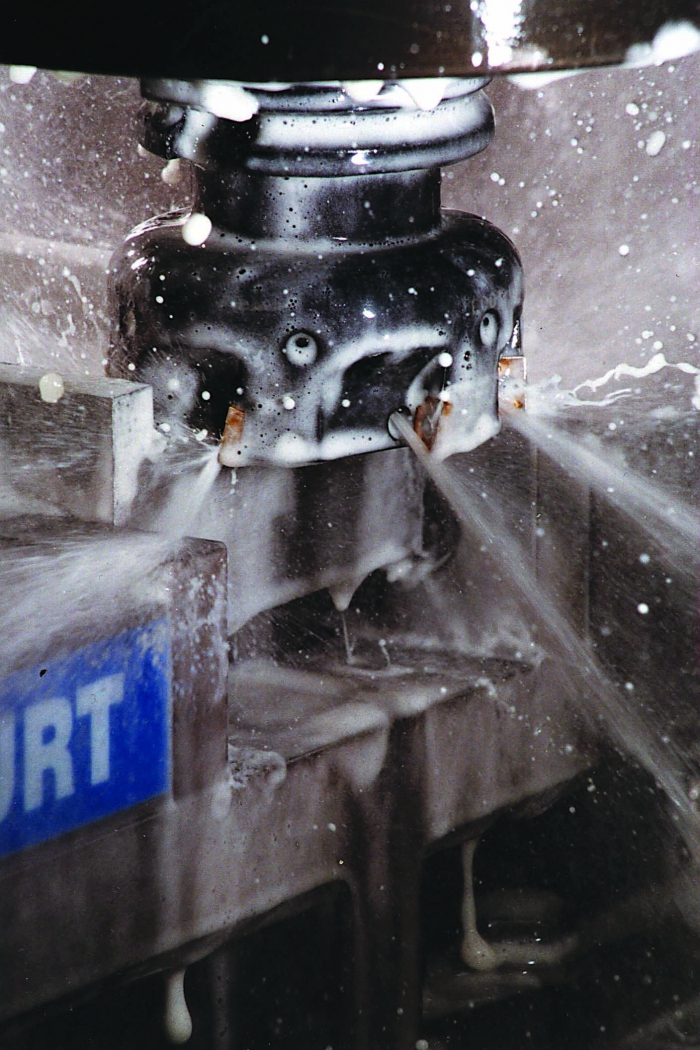 Breaking through the vapor barrier when applying high-pressure coolant enables the tool, workpiece and chips to be effectively cooled. Image courtes of ChipBlaster.

The highest-pressure model is best-suited for Swiss-style lathes, Smith said, because 99.9 percent of those machines are designed to cut with oil. “Oil provides more lubricity, which provides better tool life and surface finish,” he noted.

The company also custom-builds application-specific systems, such as ones that supply 2,500 psi (172 bar) and higher with multiple preset pressures.

He added that the 1,000-psi and higher units, which pump coolant at 8 gpm (30.3 L/min.), have a 37-gal. (140.1L) reservoir that helps prevent draining a machine’s coolant tank and starving the high-pressure system. System starvation can cause coolant pulsation.

“It causes problems because you want constant flow,” Smith said. “You can end up breaking the tool because it’s starving for coolant and [have to] scrap an expensive part.”

Heart of the System

The type of pump in an HPCS plays a critical role, and various designs are available, depending on the application.

“Although we do not build high-pressure, through-the-spindle coolant systems, we provide positive displacement pumps, which are seal-less, as a main component for these packaged systems,” said John Wanner, senior vice president of operations at Wanner Engineering Inc., Minneapolis.

Because metal fragments from the cutting operation usually infiltrate the coolant, some type of filtration is typically included with packaged systems, Wanner added. Most pumps cannot handle particulates larger than 5µm, so the added expense of fine filtration is required. Otherwise, the life of the pump is significantly reduced.

He explained that Wanner Engineering’s Hydra-Cell pumps have hydraulically balanced diaphragms and a horizontal check-valve orientation to handle particulates up to 800µm (0.031"), depending on the model. The seal-less design, which separates the fluid end from the hydraulic end, means that the moving components of the pump do not come into contact with the metal-fines-containing coolant.

According to ChipBlaster’s Parker, a diaphragm-style pump is best-suited for abrasive, heavy-particulate applications, such as when machining cast iron, cast aluminum, ceramics or glass. For more-general machining, such as 1018 steel, he recommends the company’s positive-displacement, piston-style pump. “It gives you a quiet running system with not much vibration and very little pulsations.” 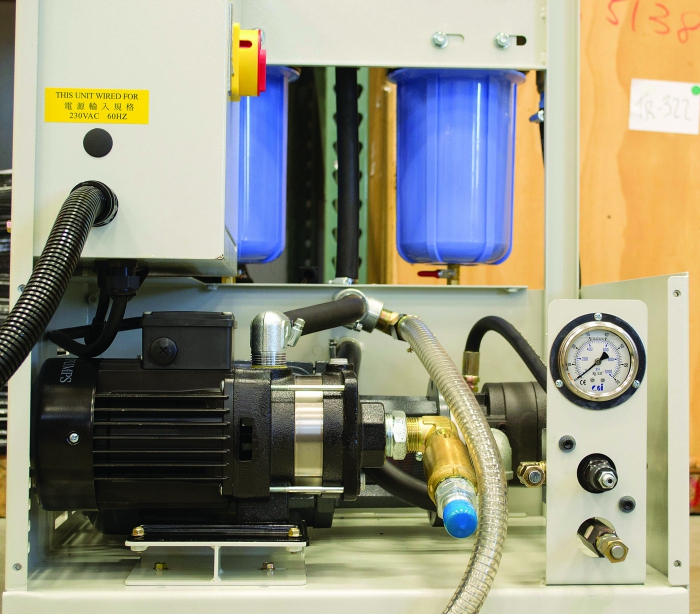 The internal components of the HPC-400 HPCS, which has an 8-gpm gear pump for water-based coolant. Image courtes of CNC Indexing & Feeding Technologies.

A plunger or piston pump is another type of pump and similar to an internal combustion engine, Wanner noted. To pump fluid, plungers reciprocate, pulling fluid through an inlet valve and then pushing it through an outlet valve.

“There is space between the plungers and the cylinder it runs in, so when metal fines get in there, they score the plunger and reduce the sealing capacities of the packings,” Wanner said. “This causes further leakage through the seal.”

In addition, screw pumps and gear pumps are common in machine tool coolant systems, according to Wanner. Screw pumps incorporate two metal screws that rotate in opposite directions while contacting each other to push fluid out of the pump. Gear pumps use two gears that mesh to move the fluid.

“Due to the tight tolerance required by these types of pumps to maintain high pressure, the metal fines cause wear, increasing the tolerance and causing a drop in volumetric efficiency and pressure capabilities. These factors can accelerate wear and reduce pump effectiveness,” he added.

Fortunately, filtration systems are available to remove chips, fines and swarf from coolant. MP Systems Inc., East Granby, Conn., is one HPCS manufacturer that offers coolant systems with a diaphragm pump and filter bags to remove particles down to 5µm, said Kermit Wright, MP Systems sales manager. “We have pumps out there that people have used for 15 years.” 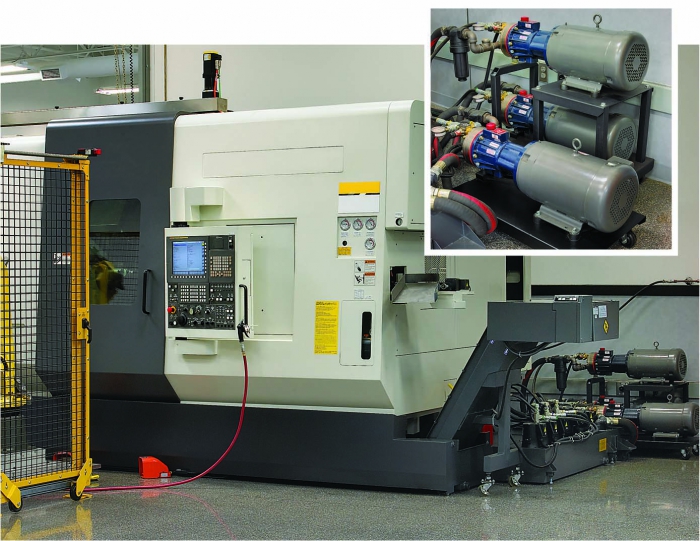 This Nakamura machine has a pump package for high-pressure coolant. The machine has three Hydra-Cell pumps (inset), with one pump for each turret. Image courtesy of Wanner Engineering.

The amount of pressure an HPCS provides determines the level of filtration required. Smith said CNC Indexing & Feeding Technologies offers dual-canister filters on its high-pressure coolant systems, and they remove particles down to 25µm when the system’s pressure is below 1,000 psi. Otherwise, filtration is down to 10µm.

“If you are up to 1,000 psi, you usually make pretty small, fine chips,” he explained. “You don’t want those chips going back up your Deublin rotary union and through your spindle and clogging the Deublin or tool.”

Smith added that when one filter becomes clogged, an alarm sounds to alert the end user to switch to the other filter and change the clogged one. “You can switch back and forth and not lose any uptime.”

Because heavy-particulate applications create a large amount of contamination in a machine sump, Parker said ChipBlaster offers its Cyclone filtration system without the need for any disposable filter media, such as bags and cartridges, which require changing.

The system removes particulate down to 2µm without stripping additives from the coolant. “That reduces damage to the machine tool and increases the life of the high-pressure unit,” he said.

In addition, a Cyclone system reduces the footprint of an HPCS by 15 percent compared with one with traditional filters, the companyreports.

To apply high-pressure coolant, end users have the option of buying a new machine tool with an HPCS or retrofitting a system to an existing machine. Parker said about 90 percent of ChipBlaster’s HPCS sales are to machine tool builders, with the remainder going to end users and aftermarket sales. When retrofitting a machine, ChipBlaster just has to verify from the builder that the machine is capable of delivering high-pressure coolant. “If it’s not, in many cases, our engineering staff can assist the customer with making the needed retrofits to prep either the spindle or turret to handle the higher pressure,” he said. 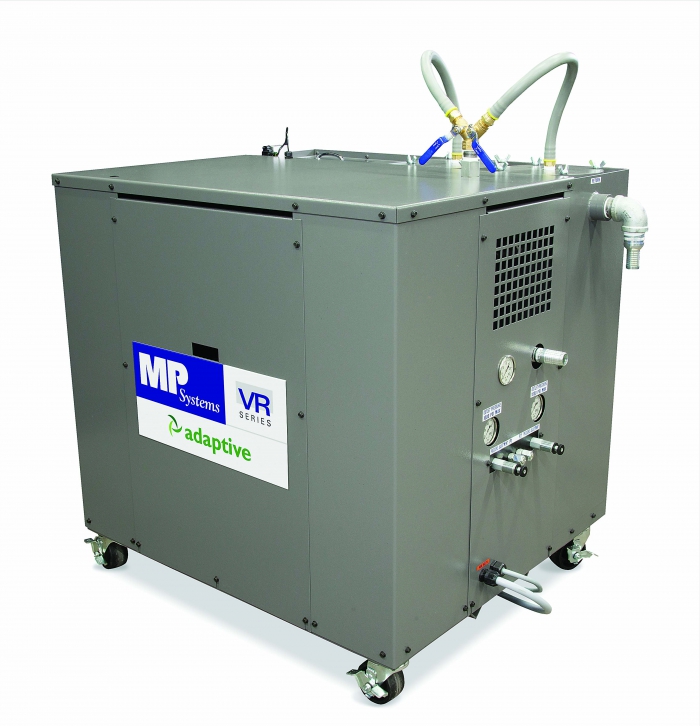 The VR series from MP Systems comes with two large-capacity filter bags and a machine installation kit and can be used with water- or oil-based coolants. Image courtesy of MP Systems.

Preparation might include replacing the rotary coupling at the top of the spindle or replacing a piston on the back of a turning center’s turret if it has an external coolant port. In addition, some machines have a tube in the center of the turret that would need to be modified and sealed to withstand high-pressure coolant.

MP Systems’ Wright also indicated that only about 10 percent of HPCSes are for retrofits, adding that about 40 percent of all new machine tools are sold with an HPCS. For machines that apply high-pressure coolant, he said the return on investment for the system is typically less than 6 months, primarily because tool life is extended five to 10 times compared with a machine without high-pressure coolant.

“Tooling is expensive. That’s the fastest way a high-pressure coolant system pays for itself,” Wright said. He noted, for example, MP Systems’ VR8 HPCS is “aggressively” priced at less than $12,000, uninstalled. “For a comparable competing unit, we are about 25 percent less.”

Smith said about half of the high-pressure coolant systems that CNC Indexing sells are for retrofits. Nonetheless, convincing parts manufacturers to purchase an HPCS can be an uphill battle. “Some shops just don’t see the benefit in it and will never spend the money on it,” he said. “But, really, where the benefit of high-pressure coolant comes in is, rather than taking a ½" DOC with that 6" endmill and then having to do a finish pass, you take a 0.250" DOC with a 1" endmill and do it faster and with a better finish.”

Parker concurred, adding that the productivity gains an HPCS can achieve are “almost unbelievable. For customers to not look at that, I just think they’re missing a great opportunity to make more money.”