Ever machined parts so small that they not only fit on a penny but can sit on old Abe’s nose? Cutting parts and part features in this Tom Thumb world often comes with Titanic-sized challenges, such as unexpected cutting tool breakage, deburring parts the size of typical burrs and machine tool spindles speeds that come up short.

Micromachining is made easier by partnering with a toolmaker that specializes in small. One such company is Midwest Industrial Tool Grinding Inc.

“As the manufacturing industry moves into increasingly smaller products, tooling must be aligned to match those requirements,” said Jennie Nelson, director of sales and marketing at MITGI, Hutchinson, Minn. For example, “diametric and form tolerances of ±0.0001" are becoming very common, and we are frequently asked to go even smaller. At this scale, everything is proportionally more difficult: Tolerances are reduced, tool cores are smaller and web thicknesses become very small. 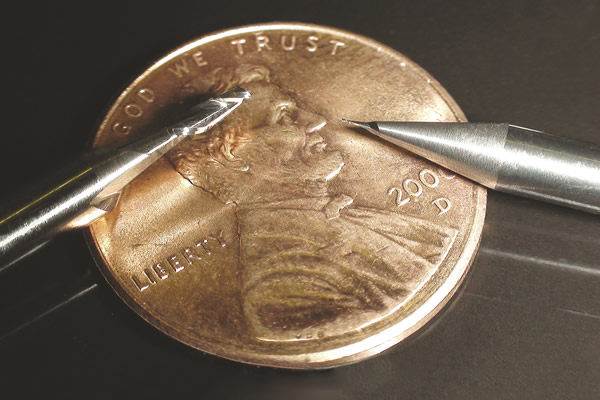 “Add to this the growing use of harder workpiece materials,” Nelson said, “and the future of tool manufacturing looks to be both challenging and very exciting indeed.”

This excitement also extends to MITGI’s customers, who often have machine tools with inadequate spindle speeds for the jobs at hand. “In these cases, companies often consider whether upgrading to newer equipment with higher spindle speeds is necessary for a specific job or for their business in general,” Nelson said.

Hans Liechti, tool manager at Mikron Corp. Monroe (Conn.), agreed that a sufficient rpm is required for effective micromachining, but it must be achieved using the right hardware. “Some shops try to compensate for inadequate rpm with air speeders, but we find these are not rigid or powerful enough, especially in tough materials,” he said. “We suggest 40,000- to 60,000-rpm, direct-drive spindles. Anything faster than this doesn’t seem to offer an advantage in tool life, although some productivity might be gained by running faster.”

Lietchti added that micromachinists also need a motion-control system to calculate accurate toolpaths at high speeds, “and should not slowdown in corners or make jerky motions. This very often results in tool breakage.”

Breaking Up Isn’t Hard to Do

Would-be micromachinists might gripe about the relatively high price of submillimeter endmills and drills, but these complaints are likely misplaced.

Liechti said the scrap rate for microtool grinding is often high. “They’re very fragile. On a tool measuring 0.008" in diameter, you may end up scrapping 20 to 30 out of every 100. Even the smallest amount of roughness on an insufficiently dressed grinding wheel is enough to break the tool.” 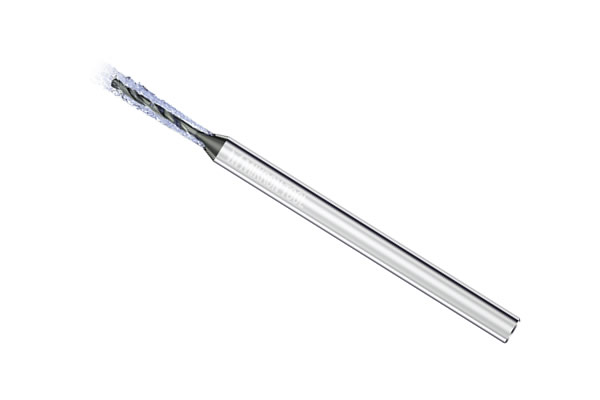 Despite the difficulties, Liechti said the market for microtools is growing, especially in the aerospace and medical industries, where titanium and nickel-base alloys add fuel to the small-part-machining fire. Anyone who’s machined an Inconel turbine blade or a cobalt-chrome prosthetic implant knows the importance of through-coolant. But how is this achieved when tools are thinner than pencil lead? Liechti said the best way to overcome stringy chips and high heat generation when cutting difficult metals is by placing coolant holes through the shank and forcing cutting fluid down the flutes and into the cutting zone. Mikron offers this feature in tools down to 0.012" (0.3mm) in diameter.

Of course, buying the most accurate toolholders available is important too. “Even with a very precise tool, you need to check the runout at the tool tip,” Liechti said. “Some customers just assume it is good, put it in the machine, and then the cutter breaks. Depending on the size of the tool, runout probably shouldn’t exceed a few microns.”

Kuhn said there’s no single cause of failure when micromachining, and success depends on perfectly matching machining parameters to mechanical systems. Even then, it’s the little things that often cause the biggest problems. 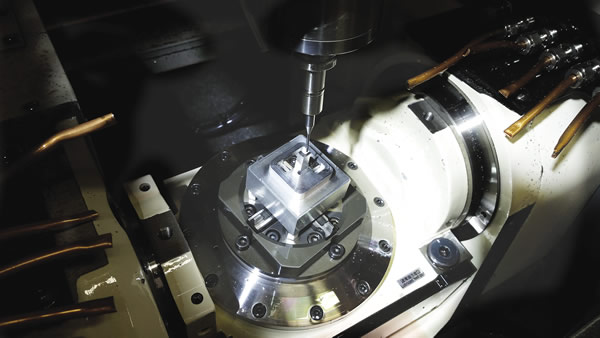 Full 5-axis contouring, as well as 3+2 positioning, of microparts is possible on this this tilt-rotary-equipped Microlution machining center. Image courtesy Industrial Machine Works.

Setting lengths and diameters on microtools, for example, must be done via laser, as mechanical systems tend to break tiny cutters. And while deburring and handling macroparts are tasks to which shops don’t give a second thought, when parts are too small for human fingers and eyes, machining processes must often be adjusted to compensate.

“We try to drop a part complete whenever possible,” Kuhn said. “That’s where 5-axis machines are nice, because, in many cases, you can machine everything except parting [off the part] from the carrier material. For this, we like to use a laser, because even with a very thin saw or parting tool, perfectly good parts sometimes go flying everywhere, never to be found.”

In instances where a secondary operation is needed to machine the back of a micropart or to hold it for deburring, Kuhn said double-sided tape, vacuum and magnetic chucks, and custom fixtures with tiny mechanical clamps are effective. And after machining is completed, measuring microparts can prove problematic as well. “A lot of times, our machines are more accurate than the customer’s existing measurement tools,” Kuhn said.

One of these customers is Industrial Machine Works Inc., Waynesboro, Va. The company’s engineering manager, Alex Hausrath, said IMW has been making parts with “features the size of fishing line” for years on its conventional machining centers, but always met with mediocre results.

“We were able to do it, but, with only 12,000-rpm spindles, cycle times were much longer than they are today, and, once the machine was dialed in, we’d have to run it around the clock,” he said. “If not, we’d scrap parts getting it going again. And once the parts came off, there was a lot of inspection and hand work to get them to print. It wasn’t much fun.”

As production volumes rose, Hausrath and the IMW team began looking for a better solution. During a visit to IMTS 2014, they saw Microlution’s 5100-S 5-axis machining center, but were skeptical of the machine’s small size. “We were still thinking in the macroscale, and wanted something with bigger travels [than the Microlution machine’s 3.94" work cube],” Hausrath said. “At that time, we didn’t think it would be possible to achieve the level of precision needed to eliminate the many machine adjustments and extra hand work we were doing. But Joel Kuhn and some of the other guys there opened our eyes to micromachining.” 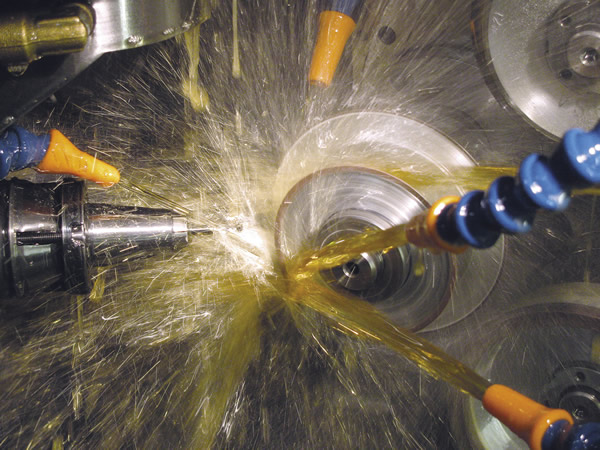 The inside of a CNC tool grinder is a busy place. Here, a small-diameter endmill is ground to size. Image courtesy Midwest Industrial Tool Grinding.

With positional accuracy of ±0.00004" (1µm) and a 50,000-rpm spindle speed, the machine solved many of IMW’s problems with process variation. And 5-axis capability greatly reduced the number of operations and simplified part fixturing. As a result, cycle times have been reduced substantially, as have in-process adjustments and secondary part handling.

Hausrath said: “The move into 5-axis micromachining created its own set of challenges, but we were able to work through most of these with some help from Microlution and learning on our own how to effectively employ small.

“What’s especially cool about true micromachining capability is the doors it’s opened for us. We’re a job shop, and we are able to quote much closer tolerances than we were previously. It’s eliminated the accuracy problems plaguing anyone trying to do this kind of work.”