A growing number of machine shops are switching from gundrills to solid-carbide drills for deep-hole applications.

A new generation of solid-carbide twist drills capable of drilling 16 to 40 diameters deep is making headway in a market dominated by gundrills. 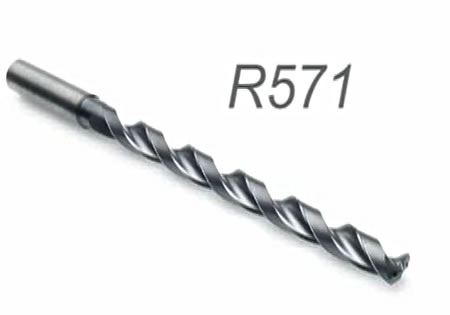 Advances in solid-carbide drills are increasingly attractive to machine shops that either gundrill on their lathes or subcontract the work to gundrilling shops, said carbide drill manufacturers interviewed for this story.

But sources also pointed out that compared to gundrills—which typically feature a carbide or hardened HSS tip, a hardened steel shank and a straight flute—solid-carbide, deep-hole drills do have limitations. 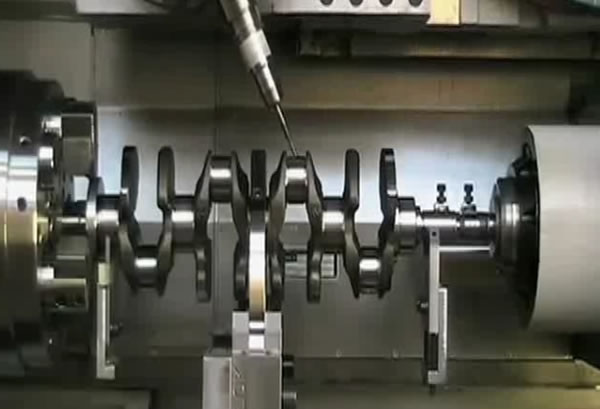 Iscar uses a 5.4mm solid-carbide long drill to add oil way holes to a crankshaft. Click the image above to view brief demonstration.

“Because gundrilling is a slower process, evacuating chips is easier,” he said. “As you get into your titaniums and stainlesses, chip evacuation is a big problem and gundrills are more versatile in handling that. I still see an awful lot of gundrilling out there.”

The tip of Guhring’s coolant-fed RT 100T solid-carbide drill is coated with titanium nitride to help protect against abrasion and heat.

Another obstacle for solid-carbide tools is machinists’ fears about its brittleness and, therefore, potential to break, as CNC lathe operator Ray Domingue will attest.

Domingue (pronounced do’mang) recalled how he doubted whether a ¼ "-dia., solid-carbide drill would remain intact in material as tough as the alloy Nitronic 50 stainless steel—much less burrow a 9½ "-deep hole in less than 4 minutes, as a local salesman claimed.

Yet he had to give it a try. Like most shops during the past year, his employer, Lafayette, La.-based Bosco Machine Shop, has placed a high priority on streamlining operations and trimming costs.

Last August, the company decided to bring a gundrilling operation in-house that it had been subcontracting to an outside shop. The application involved drilling a 9½ "-deep hole in each of 120 parts called gamma tandems, which are used in the oil industry, the source of more than 90 percent of Bosco’s business. Containing 22 percent chrome and nearly 12 percent nickel, Nitronic 50 is abrasive and a perpetual drilling challenge, according to Domingue.

The plan was to gundrill on the company’s Haas SL30 lathe. “We bought several lengths of ¼ "-dia. gundrills,” Domingue said. “I built a program, and we ran the machine roughly 24 minutes to go through 9½ " of the material.”

Domingue had drilled just a few parts when Marco Vazques, a sales rep for toolmaker Guhring Inc., Brookfield, Wis., dropped by. “He told me one of his solid-carbide drills can do the same thing in 3 to 4 minutes,” Domingue said. “I said, ‘Oh, really? Well, bring it in at your cost. We’ll run it, and if it works I’ll buy it.’ Honestly, I did not think [the solid-carbide drill] could do the job. Drilling is the hardest application on Nitronic. And carbide’s very brittle.”

Domingue set up the lathe with a standard-length carbide drill to make a pilot hole 2 diameters deep (roughly ½ ") for Guhring’s coolant-fed, RT 100T 0.25 "-dia., solid-carbide drill. “Then I indexed to the longer [solid-carbide] drill, which was 30 diameters,” he said. “After I indexed to the Guhring drill, I programmed a M00 code. I then hooked up a high-pressure washer to the lathe’s coolant system [to provide coolant at] 2,000 psi, 3½ gpm. I used a sealed collet to hold the drill because of the high coolant pressure.

“Once I entered the hole, I turned on the high-pressure coolant.” The cutting speed was 140 sfm at a 2,140-rpm spindle speed with a feed rate of 0.0035 ipr.” The drill finished the job, including the pilot hole, in about 3½ minutes. “I accomplished 65 holes before I had to have the drill resharpened and coated [with titanium aluminum nitride],” Domingue said.

He added that the drill produced “small, tight” chips, and the 2,000-psi coolant helped to ensure rapid chip evacuation. Also, the solid-carbide drill proved precise, with less than 0.010 " runout on the opposite end of the hole.

Productionwise, the Guhring tool enabled Bosco Machine to drill holes eight times faster than a gundrill. Costwise, the company saved on outside labor and shipping costs. And while the solid-carbide drill cost $375 vs. $70 for the gundrill, its added productivity easily eclipsed the initial outlay.

In addition to the company’s 3-year-old line of solid-carbide drills for holes 20 and 30 diameters deep, Guhring in November introduced a tool capable of drilling 40 diameters deep. “Actually, you can go deeper, depending on the tool’s diameter,” Hellinger said. “For example, the ⅛ "-dia. drill has about 6 " of flute length, so it allows you to drill up to 45 times the diameter of the tool.”

As with Iscar’s Edler, Hellinger acknowledged the drills’ limits. “Stainless steel, heat-treated steel and steel alloys are easy applications,” Hellinger said. “We’ve also run it in cast irons, and we’ve been doing a lot of work in nickel alloys, where it’s also done well. The drill probably wouldn’t be the best [option] in chilled cast iron or aluminum. But we do have another design we’re working on for aluminum applications; it’s a slower helix design and it will be coming out in about 6 months as a standard product.”

Introduced 3 years ago, Iscar’s solid-carbide deep-hole drills can produce holes 22 diameters deep, the company reported. The drill tip has a 140° positive-point, four-margin design to minimize thrust forces, assist with centering and tracking and preserve the edge. The company provides post-coat polishing on the flutes, margins and cutting edges to reduce friction and torque requirements. The tools are composed of submicron carbide with 10 percent cobalt, which is a key feature for fast drilling, Edler said.

“To be exact [the grade], is a 0.8μm grain size,” he noted. “That dense composition makes the drill hard and tough.” Traditionally, he continued, hard and tough were the two opposite ends of the spectrum. “Typically, when you make drills this long, you do it with a tough grade of carbide, which gives them strength.” But tough doesn’t translate into good wear resistance, he added.

“Drilling is an extremely hard application because it’s enclosed, there’s nowhere for the heat to go. In some materials, the heat can’t travel into the material; it goes right into the carbide. So by having the hard characteristic as well, you have the best of both worlds. And that’s what allows us to run these tools as aggressively as we do.”

Also key to achieving high feeds with solid-carbide drills is coolant, and the higher the better, Edler said. He recommended 1,000 to 1,400 psi. “The idea is to get the chips out. That’s always been the problem when you’re drilling deep.” He added that minimum-quantity lubricant also works well with the tools.

Among the latest companies to enter the solid-carbide, deep-hole drilling market is Troy, Mich.-based Seco Tools Inc., which earlier this year launched as part of its Feedmax line the SD16 drill, capable of going 16 diameters deep. (Seco also makes specials for drilling holes up to 25 times the tool’s diameter.)

“We have chosen a drill-tip design that’s different from the standard conical drill point geometry,” said Tom Sandrud, Seco’s holemaking manager. “We have a four-facet geometry with both primary and secondary relief angles, to achieve more relief at the center of the drill. That generates a free-cutting chisel edge [and helps] positioning of the drill.”

He added that the SD216’s configuration eliminates the need for a pilot hole. In addition, its double land margins, combined with the wide secondary land margin, enables it “to get engaged at a very early stage of the drilling process,” Sandrud said. “It helps generate good hole geometry, hold tight tolerances and (ensure) a straight hole.”

Though the company is a newcomer to the solid-carbide deep-hole drill market, Sandrud said sales of its new tool show steady growth—and he anticipates further advances in drilling technology. “Within the last 4 or 5 years, more companies like Seco have added longer drills to their lines. And our competitors continue to work in the same direction as we are.” That is, trying to make drills as long—and effective—as possible. CTE

About the Author: Daniel McCann is senior editor of Cutting Tool Engineering. He can be reached at dmccann@jwr.com or (847) 714-0177.

Courtesy of Allied Machine and Engineering

Allied Machine and Engineering Corp.’s Guided T-A, which features a replaceable carbide or HSS tip and an HSS body with straight flutes, can be used on a mill or lathe.

Drilling deep holes isn’t the sole province of solid-carbide drills and gundrills. Fifteen years ago, Allied Machine and Engineering Corp. (AMEC) began manufacturing its Guided T-A drill (to complement its T-A drilling system) for gundrill applications. The Guided T-A is a pre-engineered, made-to-order tool for customer-specific applications, be they 5, 10, 28 diameters deep or more. It consists of a high-strength steel body with a precision-ground bearing area. It accepts the company’s standard line of carbide or HSS inserts, which range from 0.374 " to 4.5 " in diameter, and specials can be ordered. The tool can be used on either a mill or lathe.

Jake Miller, product manager at the Dover, Ohio-based company, said the drill incorporates features that give it advantages beyond both gundrills and solid-carbide drills. “Traditional gundrills have a kidney-shaped edge and use a single-effective cutting action,” he said. “The T-A insert in the Guided T-A has a double-effective cutting geometry, which, in most cases, allows you to feed the tool with twice the chip load.”

In addition, the Guided T-A’s design enables it to overcome problems that could throw a solid-carbide drill off course, Miller added. “The solid-carbide tool is less capable of dealing with interruptions, such as drilling through intersecting holes or exiting onto a curved or draft surface,” he said. “The general tendency of carbide drills encountering these situations is to lead off or break due to more force on one side of the tool. But the Guided T-A has a bearing area right behind the spade drill on the front. The bearing area stays engaged with the hole you are creating and does not allow the drill to push off.” AMEC recommends that the user establish the hole with a short-length tool at a depth of one to two times the diameter. This starter hole is the same diameter as the Guided T-A and helps to minimize walking and drill whip.

Three years ago, oil and gas industry supplier Smith International Inc., Houston, tried the Guided T-A for an application it had done previously with an HSS core drill. The job involved drilling holes 14 " deep at a 30° angle in 4140 steel pipe heat treated to 30 to 32 HRC.

Ray Stafford, Smith’s tooling supervisor, said workers had spent about 5 hours making each hole using the core drill procedure. “We’d begin with a starter drill to get a pilot hole, then we’d come behind with an HSS extended-taper shank drill until we almost broke though and then we’d use the core drill to break though. So we were looking for something faster.”

Smith asked AMEC to make a Guided T-A 1¾ " in diameter and 14 " long. “We got the specs we needed, and when we put it in the application it worked extremely well,” Stafford said. “We drilled the hole from start to finish.” And they did so in 1 hour and 15 minutes. Moreover, Stafford added, “We had to resharpen the core drill after every three holes; with the [Guided T-A] we could do as many as nine holes before we had to replace the HSS tip. And now we’re finding more places to use this tool throughout the shop.”