Manufacturers of maintenance fluids and cutting fluids are teaming up to develop compatible products.

Generally speaking, wherever metal rubs against metal some type of lubricant or coolant is needed. In metalcutting, one obvious point of contact is where the cutting tool meets the workpiece, hence the need, in most cases, for some type of cutting fluid.

The open system allows machine tool lubricants to escape. The loss of lubricants requires the operator to keep track of the lubrication level and replenish the machine as needed. Because of the proximity of the machine’s mechanics to the chip-making area, the escaping lubricant invariably leaks into the cutting-fluid system. As the cutting fluid drains off the workpiece, it flows onto the machine ways. The flow of cutting fluid washes the lubricant off the machine tool components and into the coolant sump. Hydraulic oil also can enter the coolant stream when hoses or fittings that are close to the cutting area leak.

These problems occur because the contaminating lubricants upset the chemistry of the cutting fluid. Cutting fluids on the market today are carefully formulated to provide the optimal balance of cooling and lubrication. They also are designed to resist the growth of microbes and fungus and to be disposed of as easily and inexpensively as possible.

Cutting Fluids’ Evolution
It took cutting-fluid manufacturers years to develop products that could meet all of a shop’s needs. The evolution of today’s fluids began in 1883, when Frederick Taylor discovered that a heavy stream of water directed at a tool’s cutting edge would cool the tool and the workpiece enough to let machinists increase the speed of an operation by 30% to 40%. Machinists soon found, however, that water had limited use as a metalworking fluid, because it rusted parts and it did not provide any lubrication.

As an alternative, machinists turned to animal and vegetable fats and oils. These substances had their own limitations, however. The organic compounds provided lubrication, but they could not cool the cutting process significantly. The metalcutting lubricants also encouraged the growth of bacteria and fungus, which would turn the substances rancid.
Because of these limitations, the metalcutting industry shifted to the use of mineral oils with additives. These fluids provided effective lubrication, and because they resisted the growth of organisms, they did not suffer from the animal and vegetable products’ short-term rancidity problems.
The final step in the evolution of cutting fluids was the introduction of oil-in-water emulsions, commonly called soluble oils. These fluids were the first to provide both lubrication and cooling. Aqueous coolants, which contain little or no mineral oil, provide the optimal performance. The water in the solution acts as a coolant, while the solubilized additives provide corrosion resistance and lubricity. 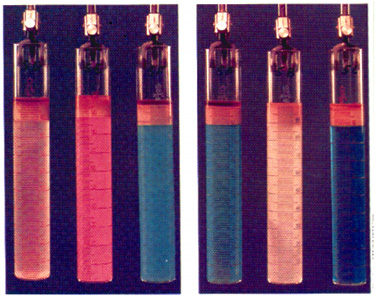 Fig 1: These samples show how well Mobil's Vactra #2 way oil separates from different aqueous coolants after sitting for 24 hours. Each mixture began with 90ml coolant and 10ml way oil.As cutting fluids have evolved, they have become more sensitive to contamination by machine tool lubricants and hydraulic oils. The use of aqueous coolants raises serious compatibility issues. As Figure 1 illustrates, aqueous coolants differ in their compatibility with maintenance lubricants. The lubricants can be separated from some coolants easier than they can be from others.

End users must be aware of these differences and choose the most compatible combination of cutting fluid and maintenance lubricant. This combination will consist of the two fluids that will completely separate in the shortest time with no stable admixture or intermediate state that resists separation.

Hydraulic Fluid Compatibility
In the case of hydraulic fluids, some of the most advanced compounds may also be the least compatible. To produce fluids that provide anti-wear performance to hydraulic pumps in high-performance service, most hydraulic-fluid manufacturers add zinc diothiophosphate to their products. These fluids are stable and generally offer extended protection against pump wear. They do their job so well, in fact, that most major pump manufacturers will warranty their product only if fluids of this performance level are used.

When these fluids migrate into the cutting-fluid system, however, they have a much different effect on performance. During machining, the ability of both aqueous and oil-base neat cutting fluids to cool and lubricate are impaired when they are contaminated by hydraulic fluid containing zinc additives. The zinc-type additives tend to compromise the cutting fluid’s ability to control built-up-edge (BUE) formation. The fluid becomes less able to cool the operation and flush chips and fines, while the fluid’s lubricating qualities are increased. The results of these changes are most noticeable in grinding operations, where hydraulic-fluid contamination can cause wheel loading or glazing, shortening wheel life as much as 15% to 20%.

The contamination also creates health and environmental concerns. Grinding with loaded or glazed wheels can add mist and smoke to the plant environment. And the zinc byproducts that remain in the fluid eventually contaminate the plant waste stream and can be very costly to remove.

There are alternatives that will reduce the risks associated with hydraulic-fluid contamination. If a machine’s hydraulic system operates at lower pressures, then the shop may be able to use a quality R&O (rust and oxidation)-inhibited oil rather than a hydraulic fluid with zinc additives. However, if the machine’s hydraulic system operates at higher pressures or the protection of the system is critical, a high-performance hydraulic fluid will still be needed. In these cases, the user can choose one of the nonzinc hydraulic fluids that have recently been introduced. In tests, these new-generation fluids have actually outperformed the traditional formulations with zinc additives. In fact, these newer fluids have performed so well that they have earned approval from the hydraulic-system manufacturers.

The developers of premium nonzinc hydraulic fluids knew their products would have to be suitable for use in a machining environment. To achieve this goal, they formulated their hydraulic fluids to separate easily from aqueous cutting fluids. 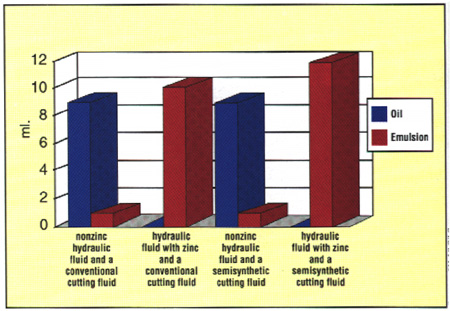 High performance metalcutting cannot be achieved unless all the elements of an operation work in harmony. When it comes to coolants and lubricants, every product must be formulated with the goals of the end user, the equipment manufacturer, and the fluid supplier in mind.

About the Author
Both authors are with Mobil Oil Corp., Fairfax, VA. Herb Smith is on special assignment to the North American Metalworking Segment manager. S. Levi Pearson is an application engineer.