Coolant isn’t cheap, so any machine shop that must use it continually seeks ways to reduce consumption while improving coolant quality to ensure longer tool life and achieve part specifications. Cameron International Malaysia’s subsea facility in Mukim Tanjung Kupang uses coolant to manufacture valves for wells a few hundred to thousands of feet under water. The valves can range in size from as small as a file cabinet drawer to as big as a vehicle. The facility’s 32 machining centers run continuously to satisfy demand. 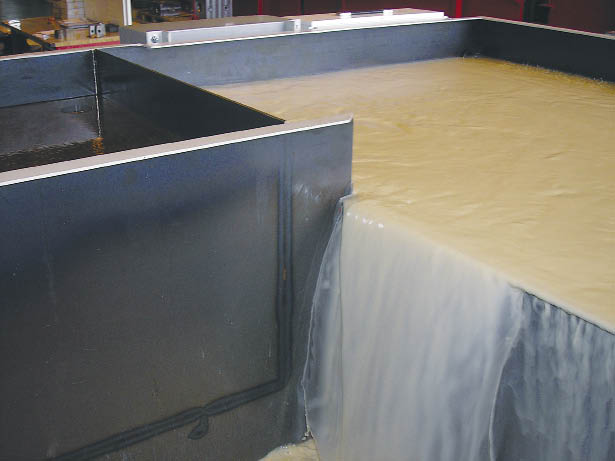 The company’s coolant usage was excessive because of heavy tramp oils at the machining centers, according to Chew Siew-Ling, the plant’s project operations manager. In addition, the average temperature in Malaysia is 80° F with 80 percent humidity—a perfect environment for breeding coolant-spoiling bacteria. “Bacteria in the coolant was causing it to become rancid in a short span of time,” Siew-Ling said.

The facility employed several types of coolant filtration, but none effectively controlled tramp oil and bacteria. Siew-Ling searched online and found that the Guardian HG-1600 recycling system from PRAB/Monlan appeared to be what Cameron needed because the unit coalesces small droplets of tramp oil together and inhibits bacteria growth. According to Mark Graf, sales manager for PRAB/Monlan, there are three stages to oil: free floating, mechanically dispersed and emulsified. Belt and wheel skimmers are effective for removing free-floating oil because the droplets are large enough that the oil stays on the surface of the coolant tank. But, as a coolant system’s pumping and jetting action shears oil particles, the mechanically dispersed oil doesn’t rise to the surface where skimming occurs.

A continuous overflow process using two 800-gal. tanks prevents rancidity by ensuring clean fluid spills into the dirty tank. That eliminates bacteria from forming in the clean tank due to pooling. In addition, the continuous overflow process cleans the coolant as it repeatedly passes through the liquid/solid filter and the coalescing filter for liquid/liquid separation.

Bacteria not only causes coolant to become rancid, it can negatively impact employee health by causing dermatitis.

Installation was completed with a forklift truck to position the unit. The only utilities needed were plant-supplied electricity, 40-psi air and a water source for automatic coolant makeup.

Cameron installed the Guardian as a stand-alone unit, requiring a worker to transport coolant to and from the system for several of the facility’s machining centers. In the future, Cameron will integrate the unit into a plant-wide coolant system, which will include overhead piping for on-demand coolant delivery and keep the concentration in balance and at the proper fill level for each machine. “When you centralize the coolant system, you’re going to produce more uniform coolant throughout your plant,” Graf said.

Typical payback for a Guardian coolant recycling system is 6 to 9 months, according to PRAB/Monlan. “We’re looking forward to a system payback in a relatively short period of time by reducing new fluid purchases up to 75 percent, while reducing hazardous waste disposal by up to 90 percent,” Siew-Ling said. “We’re also gaining efficiencies in time spent making up coolant due to evaporation with a properly proportioned mix from the automated makeup system.”