The technology hasn’t hit the marketplace yet, but current research indicates that cryogenic cooling offers a way to improve tool wear resistance and efficiency in the turning of difficult-to-machine materials. For the last three years, we at the University of Nebraska-Lincoln have been working on ways to economically and efficiently turn difficult materials such as titanium-aluminum-vanadium (Ti-6Al-4V) and reaction-bonded silicon nitride (RBSN) using cryogenics. Ti-6Al-4V’s excellent mechanical properties have made it the most commonly used titanium alloy in the aerospace industry. It can be heat-treated to strengths in excess of 1.75105 psi. The alloy is stable up to a temperature of about 540° C. However, it also has low thermal conductivity (about 15 W/m2 °C). As a result, high temperature gradients are experienced in the chip/tool interface during turning operations. Titanium also is chemically reactive and, hence, tends to weld to the tool during machining. These properties accelerate tool wear. Various strategies have been implemented to combat these problems. Advanced cutting tool materials such as coated carbides, ceramics, cermets, polycrystalline cubic boron nitride (PCBN), silicon nitride, and polycrystalline diamond have offered little improvement in the material-removal rate of titanium alloys. Likewise, high-speed machining of titanium alloys has been attempted with little success. High-speed machining merely elevates the extreme temperature gradients and, hence, accelerates tool wear. Nontraditional machining methods also have been tried, including electrochemical machining, pulse electrochemical machining, chemical milling, and laser cutting. These methods have yielded low metal-removal rates and have caused pitting and thermal damage to titanium-alloy workpieces. RBSN also offers many engineering properties at levels not found in other ceramics or refractory materials (Table 1). Among these properties are high strength even at 1400° C, low thermal expansion, excellent shock resistance, and chemical inertness. However, like Ti-6Al-4V, RBSN has very low thermal conductivity. That, plus its high strength, makes RBSN extremely difficult to machine. The material causes excessive tool wear. And, like Ti-6Al-4V, the cutting methods tried so far have not yielded satisfactory results.

A New System
These special materials present special machining difficulties that must be overcome with the help of special technology. Our research team has designed and built a cryogenic cooling system (patent pending) that transports cryogenically cooled liquid nitrogen from a tank to a reservoir located near the rear of the cutting insert. This experimental system includes a temperature-measurement system, a force-measurement system, a data-acquisition system, and appropriate amplifiers and A/D converters (Figure 1). The cooling system’s main component is the tool cover, a metal cap designed so that the liquid nitrogen comes in close contact with the insert cutting edge. The cap is mounted on the toolholder by screws. Standard toolholders suffice, though before conducting the experiments we had to refine the toolholder’s surface to fit the cap. In all our tests, the security of the insert in the toolholder was not a problem, because the cap itself acts as a strong clamping plate on the insert. With proper sealing, the cap’s bottom edge is compressed tightly onto the insert surface. The cap’s cover has two taps on its top surface. The tap close to the tool bit is used as the inlet for the liquid nitrogen, and the other tap is the outlet. Soft copper tubes circulate the liquid nitrogen. The valve in the outlet tap of the liquid-nitrogen cylinder regulates the flow through the system (Figure 2). The liquid nitrogen is provided by a cylinder with regulators that can control the flow and pressure in the system. The cylinder is placed close to the lathe. The liquid nitrogen is in actual contact with the insert and the toolholder. When the system is working, most of the insert’s surface is in direct contact with the liquid-nitrogen coolant. The liquid-nitrogen flow starts from the cylinder. It continuously flows through a valve, a pipeline, and finally through the inlet to the cap. After cooling the insert, it flows through the outlet to another pipeline and then either sprays into the air or goes to another cylinder. The liquid-nitrogen flow should start before cutting begins. The cooling system has little effect on the dimensions of the cut, so long as the cutting tool is adjusted after the cooling circulation becomes stable. However, if the tool is adjusted before turning on the cooling system, the DOC will change. The system is designed for commercial use. It is flexible, inexpensive, and stable. However, to fit the system into a specific machine tool, the user needs to consider some details, such as the space available on the machine to arrange the positions for inlet and outlet of the liquid nitrogen. The cost of the liquid nitrogen itself is about $0.30 to $0.50 per liter. The greatest advantage in this regard is the fact that the liquid nitrogen is recyclable. It’s also quite safe, though some safety precautions should be taken when handling liquid nitrogen. Do not vigorously shake the cylinder, and do not leave the cylinder near fire or chemical fluids.

Lower Wear
Our tests revealed that cryogenic cooling of the insert reduced tool wear significantly compared to other cooling methods and dry machining. We conducted numerous experiments involving the turning of RBSN with PCBN 50 inserts (the typical choice of insert grade for RBSN). The tests compared dry turning of this material to cryogenically cooled turning.

We also ran tests turning Ti-6Al-4V with H-13A-grade cemented carbide inserts (again, the typical grade choice for this alloy). These tests were run with oil and with cryogenic coolant.

For both materials, a substantial improvement in tool wear and surface quality was observed when the cryogenic system was employed. Figure 3 illustrates the tool wear exhibited in the turning of a cylindrical 80mm580mm bar of RBSN with a PCBN 50 insert at the following parameters: speed, 840 rpm; feed rate, 0.004 ipr; DOC, 0.0195"; rake angle, g0=-6°; inclination angle, ls=-6°; clearance angle, a0=6°; and nose radius, 0.31".

The parameters for all the experiments were recommended by Sandvik Coromant Co. The machine used in the experiment was a Clausing Colchester 15 lathe. Run dry, the tool’s wear increased rapidly as the length of cut increased. But with liquid-nitrogen cooling, tool wear increased so slowly that even at more than 10 times the original length of cut, the tool wear was still a quarter of that without liquid-nitrogen cooling. The resulting surface roughness of the RBSN was 3.2µm Ra when the liquid nitrogen was used, compared to the 20µm Ra achieved in the dry operation (Figure 4). This discrepancy becomes more noteworthy when one considers the fact that surface roughness for the non-cooled tools was measured after 40mm, as opposed to 160mm for the liquid-nitrogen-cooled tools.

When machining was performed at the same parameters using liquid-nitrogen coolant, the tool wear was only 0.008" after machining a circumferential length of 13.85", that is, one full cut plus 2.38" of another cut. With liquid-nitrogen coolant, the tool could machine a circumferential length of 34.42" before exhibiting as much wear as an oil-cooled tool did after only one full 11.47" cut. 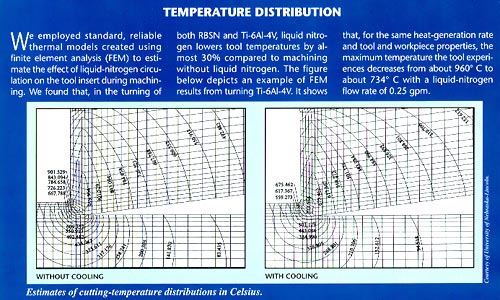 Lower Temperatures
But to what extent does liquid nitrogen really lower cutting temperatures? Our experiments revealed that the cryogenic cooling system dramatically reduced the temperature of the cutting insert during the cutting process. The temperatures measured using a thermocouple at 0.079" from the PCBN 50 tool’s edge in machining both RBSN and Ti-6Al-4V with oil and liquid nitrogen are shown in Figures 6 and 7.

Figure 7 depicts cutting temperatures measured in the machining of Ti-6Al-4V. A maximum of about 210° C was measured when oil coolant was used, as opposed to a peak value of 120° C with liquid-nitrogen coolant. It should be noted that a red-hot chip formed during machining contacted the thermocouple wire (not the junction), and this may have affected the readings. There are two peaks, one close to the 3-second mark and the other close to the 10-second mark. Peaks occurred in the same region for both liquid-nitrogen- and oil-cooled machining. This was caused by the workpiece’s surface profile. The hardness of the workpiece on both ends of the cut is slightly higher than the hardness in the middle part of the workpiece. That’s because the workpiece’s profile causes the temperature to drop much faster on either end than it does in the middle. The same trend can be seen in the force measurements.

Our testing of liquid-nitrogen cooling in turning operations continues. This technology promises to offer a practical solution to shops that deal with certain problematic work materials.

About the Authors
K.P. Rajurkar is Mohr professor of engineering and director of the Nontraditional Manufacturing Research Center at the University of Nebraska-Lincoln. Z.Y. Wang is a research assistant professor at the center.

K.P. Rajurkar is Mohr professor of engineering and director of the Nontraditional Manufacturing Research Center at the University of Nebraska-Lincoln.