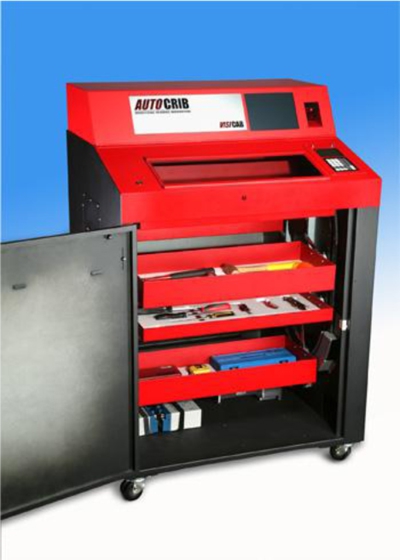 AutoCrib Inc. introduced VisiCab, an electronic toolbox utilizing object recognition. The VisiCab toolbox actually "sees" which items are in it and which are missing, making it an exceptional answer for Foreign Object Debris (F.O.D.) control. The versatile eight-tray system can be used for any application where 100 percent of the tools or other items being used must be returned for inventory control. Using a proprietary machine vision detection system, the VisiCab not only tracks tool distribution, it also knows what time and by whom a tool is picked up and when it is returned.

"For AutoCrib, the VisiCab is the next logical step in our line of industrial vending products," said Steve Pixley, CEO of AutoCrib. "The advanced technology within it simplifies the process of accounting for important and expensive tools or other items. Now a supervisor can easily generate a report to determine the status of the tool box at any time, which is critical for F.O.D. control."

In a vision-based system objects are simply placed into foam cutouts with a contrasting background, no additional work is needed. The system has the ability to see not only the shape of an object but the color of it as well. For example, VisiCab can tell the difference between a half-inch wrench with a green stripe or a blue stripe, thus it can tell the difference between two users' half-inch wrenches that might appear exactly the same.

With a feature-rich touch screen, the VisiCab is easy to use. Users simply enter an ID and a PIN number to open the door and index the trays to select the tools needed. Closing the door when finished alerts the system to check each tray and record that items have been checked out to that user. Similarly, when tools are returned, the process is also tracked and recorded via ID and PIN numbers. AutoCrib's VisiCab is available for an MSRP of $13,500.