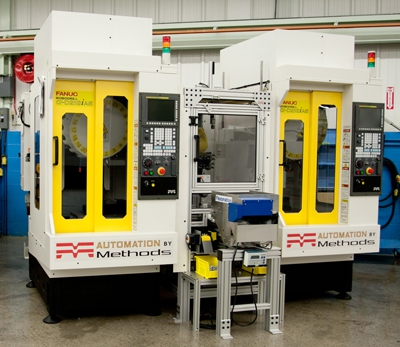 Methods Machine Tools Inc. has introduced the Twin RoboDrill JobShop Cell featuring two FANUC D21 RoboDrill Vertical Machining Centers being serviced by a single, articulating FANUC LR Mate 200iD robot. The cell features the ability to load and unload multiple parts at one time to amortize typically longer load/unload times compared to parts that are handled one at a time.

"Articulating robots are typically known as the standard for parts loading and unloading on machine tools, but have not always been the method-of-choice when working with parts with short cycle times during manufacture. The Twin RoboDrill JobShop Cell offers an excellent solution to this fast cycle time challenge and is ideally suited for a low mix, medium to high volume of parts," said John Lucier, Automation Manager at Methods Machine Tools.

Traditionally, it might take about seven seconds to load/unload one part, but due to handling multiple parts at once with the Twin RoboDrill JobShop Cell, the load/unload process is less than one second per part.

The Twin JobShop Cell features two side-by-side RoboDrill machines with a FANUC robot entering from the side of each machine to give operators full, open access to the front of the RoboDrills for tool changes, off-sets and maintenance. The cell also combines FANUC Robotics' IR Vision System with a flex vibratory in-feed system to bring the parts into the cell. The flex feeder conveys a group of parts into the vision camera's field-of-view for inspection, selecting the "good" parts for directing the robot to load them into the machine.

FANUC D21 RoboDrill Vertical Machining Centers include a new control. The FANUC 31iB5 control features extremely fast FSSB high-speed processing. This control offers streamlined electronics to reduce the number of components and provide a very ergonomic display. To significantly reduce the chance for downtime, the control provides efficient troubleshooting and maintenance capabilities, allowing users to analyze systems on the RoboDrills and receive notifications if any of the drives or electronics requires adjustment.