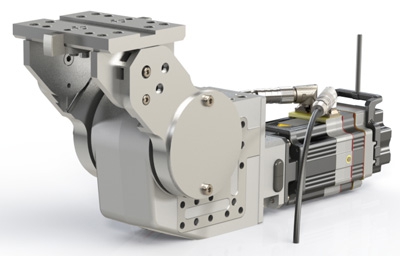 DE-STA-CO introduces a new electric pivot unit that is smaller and lighter than traditional pneumatic units, while providing uniform torque and enhanced versatility. The 98W Electric Pivot Unit enables manufacturers to add a pivot in tight spaces and gain better operational control of electrode tip dressers, clamps and other tools.

"With a pneumatic pivot unit, torque can vary greatly depending on the opening angle," says Prasad Tumati, global product director of clamping technology for DE-STA-CO. "An electric motor provides a constant torque level throughout the entire range of motion. This allows for smoother, more precise operation. Plus, the electric setup is more energy efficient and offers greater versatility."

Because it utilizes a worm gear instead of a pneumatic toggle mechanism, the 98W Electric Pivot Unit can rotate its arms a full 360 degrees. The pivot features a new design that permits the saddle arm mount to be adjusted in 45-degree increments, enabling users to easily change the pivot angle without swapping the head of the unit.

The 98W Electric Pivot Unit can operate in two modes: programmed setting with limited opening angles or infinite opening angles. It is compatible with multiple motors and can be interchanged with common pneumatic pivot units equipped with 125, 160 or 200mm cylinders.

"The wide-ranging abilities of this single unit make it capable of replacing several different sizes of pneumatic units," says Tumati. "Instead of trying to match the right pneumatic pivot to their needs, users can just install the 98W Electric Pivot Unit and know it will offer superior performance over a wide range of operating conditions."

With 500 Nm of torque, the 98W Electric Pivot Unit is well suited for a variety of applications. It requires only four seconds or less to rotate its arms 135 degrees.