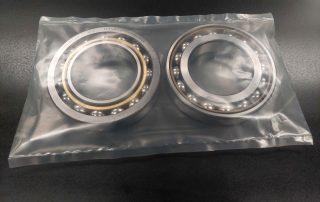 Cortec® Corporation is pleased to announce the development of its latest VCI film and bag technology: CorShield® VpCI®-220E! The new formula not only offers improved corrosion protection but also includes 30% post-consumer recycled content. This is a milestone “circular economy” achievement that meets the U.S. Plastics Pact goal of reaching an average 30% recycled or biobased content in plastic packaging by 2025. In the EU, this target is set for the year 2030. Cortec® is on the leading edge of making this circular economy goal come true ahead of time in a specialty packaging format, no less! With CorShield® VpCI®-220E Films and Bags, industrial users have a better opportunity than ever to safeguard their valuable metal assets in responsibly sourced VCI plastic packaging.

CorShield® VpCI®-220E Films and Bags combine the latest film technology with the most effective corrosion protection for metal products. Vapor phase Corrosion Inhibitors protect multi-metals (aluminum, carbon steel, galvanized steel, and copper) from all types of corrosion including rust, tarnish, stains, and white rust. By creating a dry protective packaging environment, CorShield® VpCI®-220E can replace conventional rust preventatives such as oils and desiccants, saving time and money by eliminating the degreasing or coating removal of the past. The protected part can be used immediately after unpackaging! For better EHS (environment, health, and safety) benefits, CorShield® VpCI®-220E does not contain amines, nitrites, nitrates, phosphates, halogen-based materials, molybdates, or chromates and is fully recyclable.

Combatting the High Cost of Corrosion

It is estimated that corrosion costs $2.5 trillion USD globally. Corrosion protection of metals is therefore of critical importance for industries.  Losses can occur when metal parts and equipment rust in transit, in storage, and even during the WIP cycle before products leave the manufacturing plant. Costs add up quickly from scrapping and replacing the metal or spending extra labor time to restore it. Much of the challenge is due to high temperatures, fluctuating humidity, and other uncontrolled environmental factors that create a corrosive atmosphere for metals. The simple step of packaging metals or equipment in a VCI film such as CorShield® VpCI®-220E can be invaluable to the manufacturer and the customer by circumventing corrosion and its serious consequences. This can also be valuable for large scale mothballing projects where entire plants require long-term preservation of idle assets.

Reducing the Environmental Impact of Preservation

For decades, Cortec® Corporation has been searching for new ways to prevent corrosion while reducing environmental impact. This environmental responsibility takes many forms and addresses different aspects of the product life-cycle with the goal of creating a true circular economy where possible. Years ago, Cortec® began adding “repro” (film scrap) back into the production of recyclable VCI films and also patented the concept of using recycled content in VCI films. Furthermore, Cortec’s circular economy opportunities include a VCI plastic recycling partnership in which approved partners in the U.S. and Europe can send clean used VpCI®-126 Film and Bags back to Cortec® or EcoCortec® plants for reprocessing into new film. While Cortec® has long had the ability to incorporate pre- and post-consumer recycled content into its VCI film, the 30% level of post-consumer recycled content is a new achievement that brings Cortec’s circular economy mindset to an advanced level.

Be Part of the Circular Economy

CorShield® VpCI®-220E Films and Bags will be available from both Cortec® Advanced Films (USA) and EcoCortec® (Europe) for outstanding corrosion protection that allows users to be part of the circular economy. Contact Cortec® today to learn more about this exciting new VCI film technology for metals protection and to hear about other opportunities to participate in the circular economy.