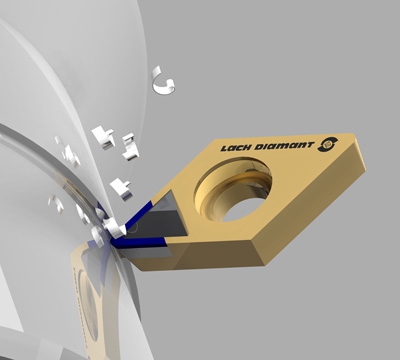 Owing to new processing technologies, 15 years ago, Lach Diamond pioneered to place ;a chipbreaker guide step three-dimensionally as a chipbreaker into the diamond layer of a PCD insert. From this the company developed several variations for their chipbreaker program for the machining of nonferrous metals, especially for aluminum. This became a key element in series and mass manufacturing. The Titan is the patented >>chipbreaker Type IS<< (US Patent 6.315.502).

With its active chipbreaker and stable cutting edge it was developed mainly for the rough machining of thick-walled, solid components with a SI content below 7 percent and is also suited for interrupted cuts. With cutting speeds from 800 to 2500 m/min. and feed rates from 0.1 to 0.3mm/rev. depth of cut, up to the maximum utilization of the cutting width from to 3 to 5mm are possible.