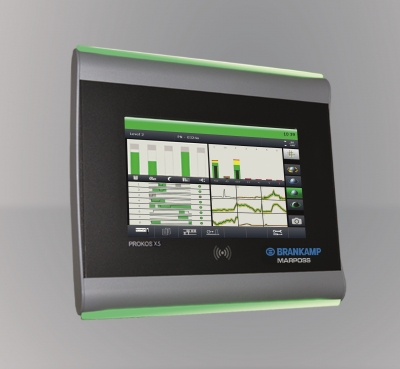 Marposs has announced its Brankamp X5 in-process, real-time monitoring systems for cold and hot forming, thread rolling and stamping operations. Building upon the capabilities of its X1 and X3 models, the X5 units feature a large 12-inch touch screen, as well as Tool Memory that stores data that can be used to quickly achieve precise machine setup for repeated production runs.

Sensors in the machines are positioned to convert energy into electrical signals that monitor tool and machine performances from applied forces. The systems use the information from the sensors to learn the normal limits of the process. The control unit then observes the signals of each cycle and compares it with the stored curve. When the signal moves outside of the envelope curve, the formed part is sorted out or the machine is stopped.

Each X5 allows the user to input the type of machine to be monitored and features eight channels for sensor signals that are displayed as maximum forces, envelope curves and trend progressions. Additionally, six zoom channels offer detailed monitoring of specific, sensitive process areas such as distorted parts or a short feed.