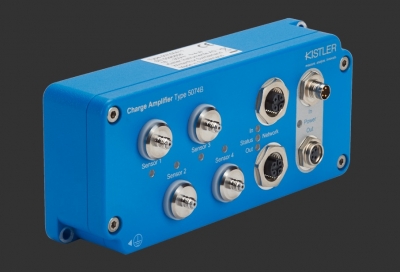 Charge amplifiers have a crucial part to play in the piezoelectric measuring chain. Kistler offers charge amplifiers that are tailored to users' needs, with innovative solutions that match customers' specific requirements and digitalization levels. And now, Kistler is launching a new version of its 5074A digital charge amplifier: designated as type 5074B, it incorporates improvements that will enable users to benefit from enhanced flexibility and simpler integration.

Back in 2018, Kistler achieved a breakthrough in industrial charge amplifier technology by introducing its 5074A digital charge amplifier. Launched on the market as the world's first digital charge amplifier, the 5074A is the ideal solution for control and monitoring of industrial processes such as press-fit, assembly and joining operations. It was the only amplifier on the market with communication consistently based on Industrial Ethernet (IE): for the first time ever, it gave plant and machinery manufacturers the possibility of integrating any desired piezoelectric sensors directly into their real time-capable Ethernet systems. Users could comfortably make settings on the measurement amplifier via the control – something that was never possible in the past. Maximum flexibility was ensured by an extremely wide measuring range – from 20 to 1,000,000 pC – coupled with an extensive range of measurement functions for diverse applications, opening up virtually unlimited operational possibilities. All these advantages made the 5074A amplifier the perfect product for applications requiring dynamic and quasistatic measurements via Industrial Ethernet. Another key benefit: high performance by today's standards, allowing acquisition rates of up to 50 kSps per channel and real-time transmission of measurement data with cycle times as low as 100 μs.

"The new 5074B digital charge amplifier, available as of now, supersedes the 5074A – and it retains the range of tried-and-tested benefits offered by its predecessor," says Stefan Affeltranger, Product Manager for Production Monitoring at Kistler. But the 5074B also comes with two features that deliver major operational improvements. The new amplifier is ready to operate within around six seconds, as compared to the previous time of 30 seconds for each startup procedure – so users save valuable time. This improvement has a direct impact on plant availability, especially for modular plants with swappable hot-plug modules. Another innovation: the two energy paths in the M8 connectors are now separated so that additional standard devices can be connected as per the industry standard without extra considerations. This also makes it possible to switch off the peripheral power. "With the new 5074B, additional devices can be installed in the machine very easily and reliably – and what's more, this doesn't result in any further functional restrictions," Affeltranger explains.

Like the 5074A predecessor model, the 5074B can also be implemented simply and at low cost. Integration into an existing Ethernet does not require any additional software. Complex and costly cabling for analog and control signals is also eliminated. Configuration via the control means that industrial processes benefit from excellent data security. "The newly available 5074B is a major addition to the family of charge amplifiers from Kistler, which includes analog and digital models as well as a miniature charge amplifier with IO-Link technology," Affeltranger points out. "We're continuously developing our portfolio so that we can respond to users' widely varying requirements by offering innovations and cutting-edge technologies. And this also opens the way for digitalization of the measuring chain in many areas where such a step did not seem technically or economically viable until now."