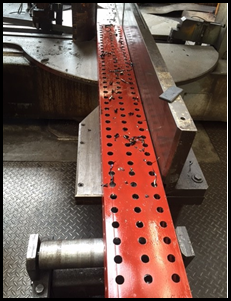 The structural steel industry is bracing for – and counting on – a huge increase in demand for structural steel products. The anticipated surge in demand arises from a renewed focus on improving the country’s infrastructure, as well as a high level of private sector construction. Manufacturers are investing in machinery that enables them to increase part production speed. This emerging metalcutting trend is supported by a variety of new tools, including the structural steel GEN3SYS XT holder and insert system and T-A structural steel drilling system made by Allied Machine & Engineering.

Structural steel is a cost-effective framing material that brings great value to a project in terms of initial cost. It can also reduce other costs, including those associated with foundations and façade systems. While contractors are performing preliminary site preparation and foundation work, structural steel is fabricated offsite before being delivered and erected at the job location. This process accelerates the project schedule. This is a major advantage, as the structural framing system is always on the critical path of the project regardless of material.

There can be quite a bit of variance in the chemical composition of the material referred to as structural steel. Industry parlance sometimes refers to structural steel as material that is not “clean,” due to the presence of this variety of potential ingredients. Material requirements are somewhat lenient – there tends to be a bit more leeway on how tightly held the quality is on the chemical composition than if it were to be used as a support for a rocket part.

The driving factor is that structural steel has a lower carbon content, which tends to make chips formed quite stringy. In addition, structural steel does not machine very well. We in the industry think of it as an entry-level steel, not highly refined, and lower in carbon content. It is perfectly fine for the types of loads it is typically designed to handle.

In the past 5 years, the structural steel market has made massive investments in machinery that allows them to run carbide tools. This enables them to make more parts and faster. We have seen shops that may have purchased 15 tons of steel per week able to increase that to 17 tons per week. If a shop can save 10 minutes per beam and usually completes 10 beams per shift, the higher penetration rate of the new tools enables them to fabricate 11 beams in the same amount of time they previously did 10.

This capability to increase production is key to meeting the expected increase in the market. When the economy crashed in 2009, the metalcutting industry was hit very hard, due to the steep loss of construction work. There was still a fair amount of government contracting work for bridges and the like, as the federal government loosened the purse strings for these large projects to keep the sector afloat. But those focusing on private sector work, like skyscrapers and hotels, really suffered.

General information coming out of Washington D.C. suggests that construction is picking up in both the public infrastructure and private construction sectors. This is corroborated by attendees at a recent tool show, who indicated that their contract backlogs are definitely on the upswing, a healthy factor for the industry. Structural steel manufacturers will be able to produce more tonnage if they can use their equipment to the highest efficiency by increasing speeds and penetration rates.

AISC vice president John Cross, P.E., puts it this way, “As we move into 2017, it is anticipated that we will see an overall growth of 4 percent in our prime building sector market on a square-footage basis ... The good news for the structural steel industry is that this growth will be in the nonresidential sector, where structural steel has a higher market share ... The combined growth in the market and the types of projects where the growth will occur will result in an increase of 5 percent in the apparent demand for structural steel.”

Finding the right cutting tool for the specific structural steel application requires understanding how success is measured for the application. For one manufacturer it might be the number of holes drilled, while another might be more interested in meeting a particular penetration rate, or having minimal exit burrs. The best approach is for the tool manufacturer to gather the information on customer requirements, then place the proposed tool on the machine and test the tool by making actual production parts.

In addition, one must understand the equipment the tool is running on and the factors that may affect tool performance and tool life. Understanding the quirks of particular machines and knowing their pluses and minuses allows tool makers to take advantage of the machine’s capabilities, based on different tool geometries, coating, substrates, and speeds and feeds.

As noted, structural steel manufacturers are investing in equipment to help them ride the anticipated production wave. Here are a few interesting examples of structural steel companies looking for tools to improve on older drill technology.

One major steel producer, producing bolt holes in structural steel beams, handles up to 80,000 tons of steel a year. Running 24/7 to process steel and steel tools, they deliver about 500-600 tons of steel a day to customers. They had been using an HSS twist drill to make bolt holes. Twist drills are old drilling technology, with long cycle times and they require regular regrinding and resetting. It was time for an upgrade and the company was looking to move away from twist drills toward something that could help them increase production while getting better chip formation, tool life and hole tolerances.

They embarked on an extensive testing program to compare their existing system with Allied’s new GEN3SYS XT high-penetration carbide drills for structural steel cutting. They ran the new tips on their machinery alongside the old drills through every aspect of day-to-day work, comparing performance quality, ease of use and speed. The tests were organized specifically to avoid interrupting production.

After 2 to 3 weeks of testing, the steel company determined that the new drill tips were better than the old drills in almost every respect. The company can now cut through steel significantly faster than the old technology, with better chip control and less noise. Machine operators can use and change tools much easier than before, without the need to remove the holders from the spindles.

Allied performs regular onsite check-ups on its technology and provides specialized training to all employees working with its products. New drill tips are always stocked so the company is never left in need of tooling. The automated ordering systems, short lead times and easy electronic invoicing work effectively with the company’s business procedures. The steel company also benefited by being able to order online and receive stock the next day.

Since the testing partnership worked so well, the steel company decided to participate in a program of continuous testing, in which new drilling products are brought in regularly. Operators run the new drills through basic operations to see if they stand up to the test. In this way, drilling technology is constantly enhanced as the company gains new performance information and testing data. After testing, the company sends reports to detail how the products performed in a given steel application. No part of the testing interferes with daily operations and the information goes towards providing even better tooling products in the future.

Another example is a steel fabrication shop drilling I-beams made out of structural steel for the construction industry. They are drilling 13/16” holes ½” deep. Previously, the customer’s tooling had a cycle time of 9.29 seconds and a life of roughly 600 to 800 holes. They were paying $138 per drill and regrinding five to six times. Wanting to improve their production process, they needed to reduce cycle time, reduce costs and alleviate problems with in-house tool regrinding. After switching to Allied structural steel products, the company eliminated the need for regrinding and decreased their cycle time to 5.56 seconds. The fabricator also achieved a total cost savings of $149.64 (37 percent) for every 1,100 holes they processed.

One final example is from an end user machining structural plates from A36 steel. Their existing tool drilled a 1-1/16” diameter through hole to a thickness of 1.25”. The tool had a cost per hole of $0.573 and a tool life of 1,200 holes per insert. Looking to reduce their cost per hole, they began using the GEN3SYS high-penetration drilling system. Tool life was increased by 8 percent, while cost per hole was reduced to $0.355 – a cost savings of more than 38 percent. The penetration rate increased by more than 39 percent.

Rob Brown is Product Manager at Allied Machine & Engineering Corp., Dover, Ohio. He may be reached via email at robrown@alliedmachine.com.