Vision Engineering Ltd. announces the loss of founder Rob Freeman, MBE, who passed away on Aug.19, aged 84. Rob Freeman, born in 1933 in Singapore, grew up in Woking, Surrey, U.K., and was a toolmaker who worked as a race mechanic with the Jaguar Racing team in the 1950s (pictured below). He developed a borescope that enabled internal race engine components to be inspected, without taking the engine apart. This innovation led to the foundation of Vision Engineering in 1958. 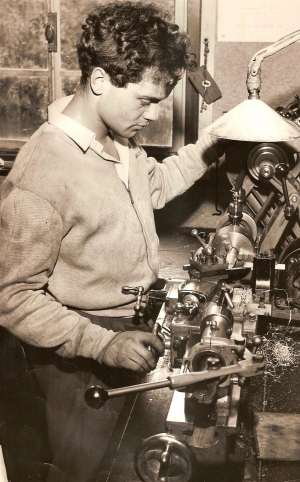 In 1996, Rob was awarded the MBE, in recognition of his services to the British optical industry. This summer, Rob Freeman presided over the opening of the Freeman Building, Vision Engineering’s purpose-built global headquarters, manufacturing and R&D facility, in Send, Woking, U.K. The new building, close to the site of the original 1950s factory, is named after Rob Freeman and was officially opened by Her Majesty’s Lord Lieutenant of Surrey and the Mayor of Guildford.

Mark Curtis, managing director of Vision Engineering, commented: “We are extremely saddened by the death of our company founder, Rob Freeman. He was a true pioneer of engineering who learnt his trade during the glory days of British car racing and aerospace and whose dynamism, grit and ingenuity created a thriving business, which continues to grow and innovate today. Rob enjoyed a challenge and was an early leader in the development of overseas technical markets, to the point where 92 percent of the company’s turnover comes from export. It was a great privilege and pleasure to work with him and we are glad that he was able to see the completion of the building dedicated to his legacy. We extend our deepest sympathies to Rob’s family, colleagues and many friends, who remember him with great fondness.”

The company says it continues to grow and revolutionize the inspection and measurement process with award-winning products. Vision Engineering holds several patents for its ergonomic microscopes and measurement systems which are used worldwide by manufacturers in many industries including; electronics, medical devices, automotive and aerospace.