U.S. Tsubaki is known for producing precision power transmission parts for some of the best-known OEMs in the automotive industry worldwide. The quest for quality craftsmanship and operating efficiency is standard procedure in Chicopee, Massachusetts, where the company’s Automotive LLC division operates a state-of-the-art manufacturing facility.

The facility manufactures tensioners, which play an important role in the automotive chain-drive system. The tensioner takes up slack in the chain circuit and extends to make up for wear and thermal expansion, according to the company.

Inside the Massachusetts facility are nine production lines, each with three machining stations to make the tensioners. The 27 machines need continual cutting oil recycling to keep out contaminants and fine particulates to satisfy automakers’ demands for higher surface finish and closer parts tolerances.

Even though this modernized facility relies chiefly on automation, the job of cleaning out the machines’ sumps had been covered strictly by manual labor. Each machine has three separate tanks and it used to take eight to 11 hours to clean them all out. The Chicopee plant would use an air pump for the liquid, then shovel and scoop out the chips and fines by hand, and finally wipe out the tanks with rags. It was a nasty, time-consuming job.

Then, the automotive division made the decision to purchase an Eriez push sump cleaner with a 275-gallon capacity. This versatile, portable cleaner handles the gritty work of removing chips and fines from cutting oil, saving the company money by re-using the purified cutting oil that keeps the precision machines humming. 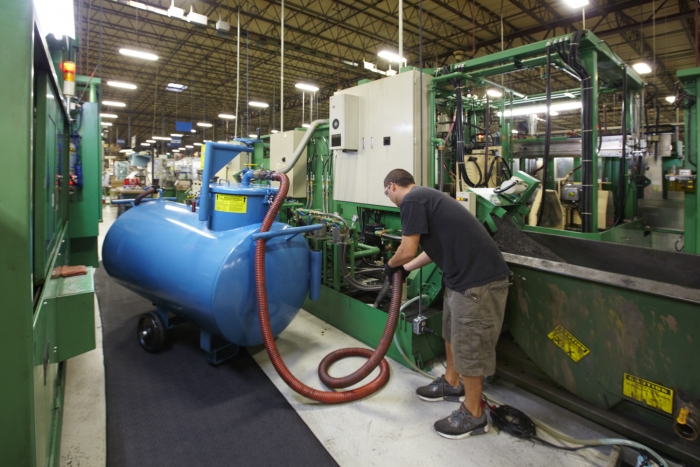 With all its manufacturing technology, trying to solve the problem of sump cleaning was a challenge. The company investigated how to recycle the cutting oil and knew that an inline system would be expensive because they would need to reconfigure the tanks in the machines. After assessing its needs in concert with Eriez, the Automotive LLC division decided that a portable cleaning unit was the best option.

Each of the nine production lines at the Chicopee facility houses three precision machines: the first for turning and milling, the second for drilling and boring, and the third for final machining. All tensioner parts are made from cast steel that turns into fine particulates and settles into the machine sumps throughout each stage.

The tanks on each machine vary in capacity, ranging from 30 to 80 gallons. With 27 machines and three tanks per machine, Gifford’s crews were disposing almost 4,500 gallons of cutting oil by hand per change-out.

They would schedule the clean-up at night when the machines were down. A lot of man hours were needed — a group leader, machine specialist and operator to perform the work and they had to wear protective suits. It would take up to 11 hours to clean all the machines out, plus the company was hauling away all the spent cutting oil. The company was buying cutting oil 220 gallons at a time to replace what the company was throwing away. 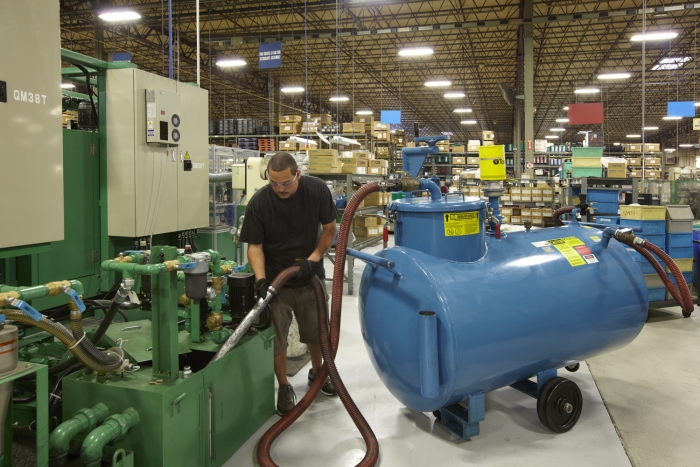 With the Eriez sump cleaner, it now takes two hours to do the complete job, where it used to take eight to 11 hours per machine. The automotive division re-uses the filtered oil at least one time over, which saves 50% on oil consumption. The change-outs are done three to four times per year on seven lines with three machines each. The economics are impressive. The company saves almost $70,000 per year in cutting oil alone. When you add in labor savings and reduction in downtime, the total payback is over $150,000 per year. As a matter of truth, the Eriez sump cleaner paid for itself in the first year.