Nueva Precision, Milliken, Colorado, is, for the most part, Eddie Casanueva and his wife Leandra operating out of a garage. And while many job shop owners would want to grow and expand their businesses, the Casanuevas are content with keeping the shop at its current size because, according to them, customers benefit from dealing directly with the person making their parts. This, as well as the shop’s advanced manufacturing technology, makes Nueva Precision a trusted partner to its customers and an agile supplier. 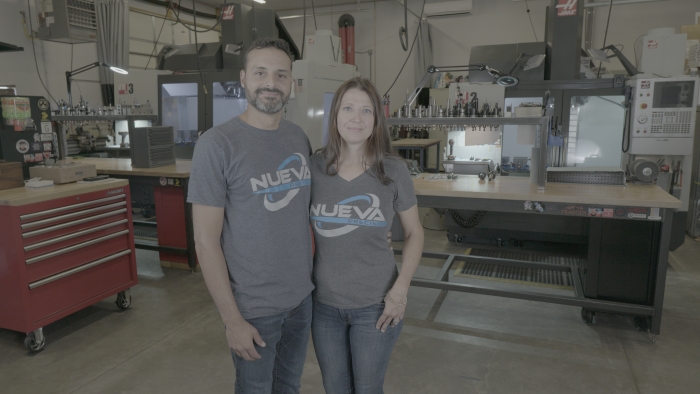 It may be a small shop, but Nueva Precision is extremely progressive, tackling some of the industry’s most sophisticated components for such applications as overseas defense drones, the International Space Station and satellite rockets. To do so, Casanueva keeps pace with the latest machine tool technology and software. Unfortunately, the shop’s toolholders hindered it from taking full advantage of a new CAM software package, which meant they would need to find a new solution.

The shop had integrated a new vertical machining center into its operations, one with much more accuracy and speed thanks to its 15,000-rpm spindle. However, Casanueva’s limited knowledge of the CAM software he was using at the time kept him from generating the optimized toolpaths capable of taking full advantage of the machine’s capabilities. This was when he upgraded his CAM software to one he was familiar with from his early days, learning CNC machining while he attended college at the New Jersey Institute of Technology.

With the new software package, he could create far more aggressive toolpaths, but his toolholders were unable to handle the increased speeds and cutting forces. As a result, cutters would pull out of the holders, and to lessen the risk of that happening, Casanueva would have to slow down his machining speeds – and man the machine at all times.

It was during the 2018 International Manufacturing Technology Show in Chicago that Casanueva began his search for a better toolholding system. His initial thought was shrink-fit holders, but he decided to instead try the powRgrip (PG) toolholding collet system from Rego-Fix after spending a considerable amount of time evaluating it. 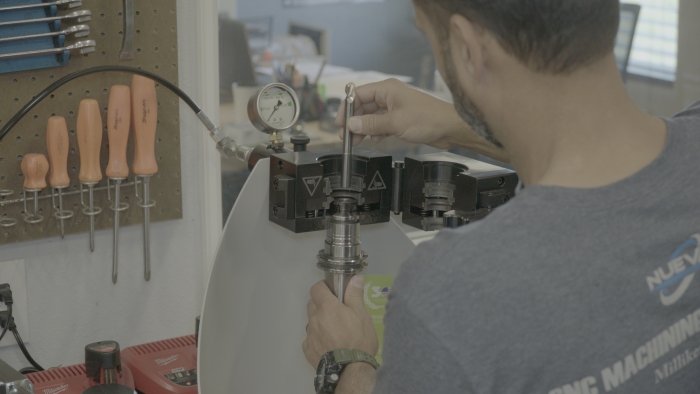 “Honestly, I did waver back and forth on which type of toolholding system to use,” Casanueva said. “But in the end, I realized shrink-fit wasn’t a good fit for the shop. It lacked the flexibility the PG holders provided. Plus, once we had them in use, the PG holders eliminated our cutter pullout problems, and their extremely low runout allows us to take full advantage of the aggressive toolpaths and high spindle speeds from our new CAM software and VMC.”

Nueva Precision uses mostly solid milling cutters, and its PG system generates clamping forces equal to or higher than shrink-fit holders. The system is safe, precise, cost-effective and includes a holder, collet and load/unload unit that generates six tons of force. For Nueva Precision, the PG system eliminates the need for any type of holder heating unit, as well as the time spent waiting for shrink-fit holders to cool enough for handling.

The PG system relies on the interference between holder and collet to generate its clamping force. Unlike shrink-fit or hydraulic holders, PG uses the mechanical properties of the holder material to generate tremendous gripping force with a TIR below 0.0001". Because the PG system is user-friendly, Casanueva presses in a tool or removes it from a holder in less than 10 seconds, and without any heating involved, he can use those tools immediately after a tool change.

The PG system relies on the interference between holder and collet to generate its clamping force.

“The minute I started using PG, particularly in my rough milling operations, any problems with cutter pullout disappeared,” Casanueva said. “Now I use the holders for any applications where there is even the slightest risk of cutter pullout, when running extremely aggressive toolpaths and for finishing operations on extremely high-end, expensive parts.”

He does acknowledge that other types of holders would work for some of these applications, but said that the PG system excels for all of them, which allows him to eliminate the hassle and costs of having multiple systems. He also benefits from PG holders for his 4-axis rotary milling work. In these instances, the small, slimmer nose profiles of his PG25 and PG15 holders allow him to access tough-to-reach part areas and stay clear of workholding and fixturing.

Most of Nueva Precision’s parts are machined from aluminum, titanium and stainless steels, as well as more exotic alloys designed for demanding aerospace applications. Customers often supply these raw part materials to the shop already tested and inspected. Many parts Casanueva works with must be heat-treated prior to machining, so there is no post-processing done that could compromise material and/or part integrity. 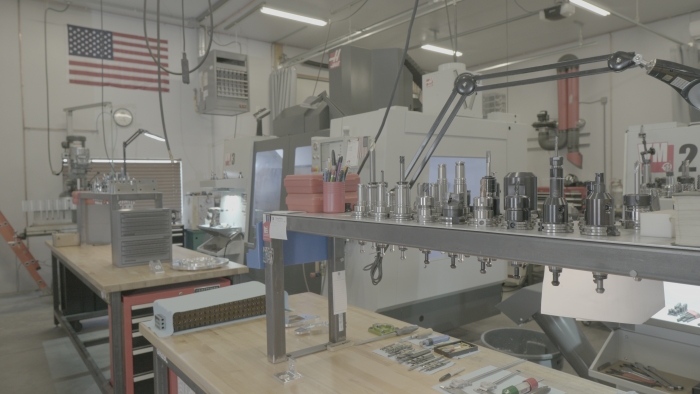 Nueva Precision tackles some of the industry’s most sophisticated components for such applications as overseas defense drones, the International Space Station and satellite rockets.

“This means I basically machine hardened parts, some of which are as hard as 59 HRC,” he commented. “The part geometries are challenging enough, but then add to that their extreme surface hardnesses, and one realizes why I use a toolholder system like PG.”

Job lot sizes at Nueva Precision typically involve only a few pieces, but some can run into the thousands over the full span of a long-running job. And while the lot sizes are low, some jobs can take months because of multiple components that are then fitted together with zero play.

Nueva Precision wasn’t Casanueva’s first machine shop venture. Before starting Nueva Precision, he sold a thriving and well-known off-road vehicle parts business because, according to him, what he truly loves about machining is being out on the floor and working closely with customers to solve challenging engineering problems. Now he says that kind of tightness with customers is the key to Nueva Precision’s continued success. That, and the most advanced machines and software along with tooling, in particular Rego-Fix PG toolholders, that let him take full advantage of both. 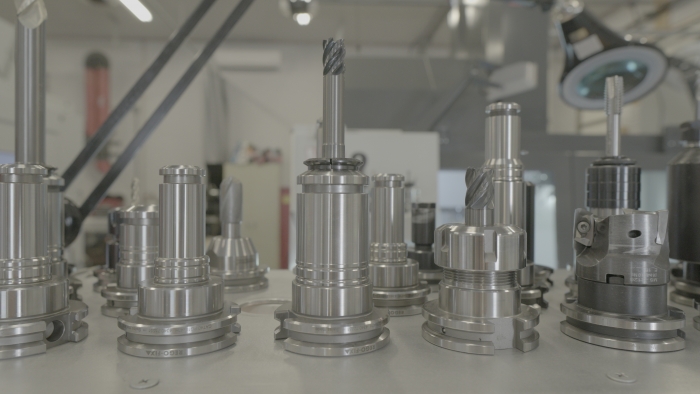 A selection of tools and holders at Nueva Precision.

Shop Gets an Off-Road Start

During his schooling for mechanical engineering in New Jersey, Eddie Casanueva was into off-roading, making all the vehicle modifications himself. He would compete at several events around the country, and this “hobby” eventually led to the manufacturing lab at his school.

The lab, funded by the state, was a manufacturing center that supported campus research. Casanueva wanted to get a student job there, but the lab didn’t hire students – until a mishap involving a forklift at the lab occurred. Apparently, someone had accidently driven a forklift into the back of a pickup truck at the lab, and Casanueva offered his and the services of the winch on his off-road truck to pull out the forklift.

Afterwards, he asked the lab director if he’d look at his resume for work at the center. He was hired on the spot for sweeping floors and other odd tasks. This is where he learned all about machining. And with his increased machining knowledge, he designed and produced more custom components for his off-road vehicle.

As these custom-machined parts garnered more and more attention at the off-road events he attended, Casanueva realized he could produce and market them commercially. It was at this time that the manufacturing lab hired him as a full time CNC machinist, and he worked out an arrangement with the lab to rent machine time to produce his custom parts to sell.

His fledgling business continued to grow to the point where he decided to leave school and pursue the business full time. He took on a business partner, incorporated in 1999 and established the SpiderTrax Inc. brand. The two then moved the business out to Colorado in 2001, and within six months, hired their first employee.

In the beginning, they outsourced a lot of their part processes, but in 2005 the shop decided to add some serious CNC machines and soon outgrew its facility. It moved operations into a 15,000-sq.-ft. facility with eight machining centers and 20 employees manufacturing parts 24 hours a day. Then, in 2017, he sold the business and started Nueva Precision.

While he had been manufacturing in Colorado for several years, he had no customers when he officially opened his new shop’s doors for business. But within two months, word had spread to the point that he had so much work that he had already hit capacity with the equipment he had at the time, including a toolroom lathe and vertical machining center. That lineup has since grown to encompass three CNC vertical machining centers, a turning machine, high-end CAM software and a powRgrip Toolholding System from Rego-Fix.