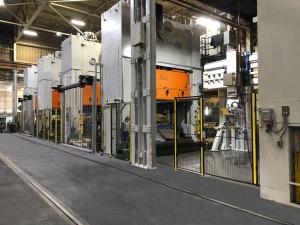 To meet its customer's needs, and improve safety, make manufacturing more efficient, shorten cycle times and increase flexibility, Spartanburg Steel decided in 2017 to automate one of its existing tandem lines with five large presses that were manually operated at the time. As the company already had a relationship with AP&T North America, they turned to them for an automation solution.

“This was our second AP&T automation installation," said Chad Raynes, vice president of business development & engineering, at Spartanburg Steel. "We previously purchased a transfer system which performs very well, so we trust the technology.”

For AP&T it was a technical challenge to bridge the substantial gap between the line’s presses efficiently. “Rather than use conventional industrial robots, we presented a design solution based on our new generation of five-axis SpeedFeeders,” said Adam Allansson, president of AP&T North America.

The proposal was accepted and in April 2018, Spartanburg Steel placed its order. A year and a half later, the equipment was installed and integrated, and the now fully automated line could be commissioned.

“In total, we installed six SpeedFeeders for blank feeding, transfer of parts between the five presses, and unloading. As we were doing our work, Spartanburg Steel upgraded the presses in the line and their tool exchange system. We cooperated closely with other suppliers to ensure the best possible total solution in the shortest possible time,” said Allansson.

Since the autumn of 2019, the upgraded, five-press tandem line has delivered according to expectations. It is regularly serviced by AP&T's technicians and new staff at Spartanburg Steel are trained in operation and safety by AP&T.

“We installed the automation to improve safety on the line. This has also resulted in better efficiency at a lower cost. The equipment has met our expectations and continues to run well. We plan to automate additional lines in the future, specifically a tandem line in 2023,” said Raynes.