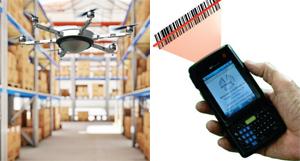 Scaling a manufacturing operation to produce millions of anything is hard. Managing an inventory of millions of parts a year and making sure parts get to the line on time is a challenge. […] But RFID, because it allows you to distinguish between different units of the same part, doesn't require line of sight, nor does it require human involvement, […] offers a better way to manage inventories.

(Read Is RFID Essential in Manufacturing? And if you missed it, here's a link to CTE's January, 2017 feature on RFID tagging for toolholders.)

There are manufacturers and suppliers with so much inventory to track that RFID alone isn’t enough: MIT has announced that its researchers have developed a system that enables small, safe, aerial drones to read RFID tags from tens of meters away while identifying the tags’ locations with an average error of about 19cm. “The researchers envision that the system could be used in large warehouses for both continuous monitoring, to prevent inventory mismatches, and location of individual items, so that employees can rapidly and reliably meet customer requests.”

The central challenge in designing the system was that, with the current state of autonomous navigation, the only drones safe enough to fly within close range of humans are small, lightweight drones with plastic rotors, which wouldn’t cause injuries in the event of a collision. But those drones are too small to carry RFID readers with a range of more than a few centimeters. The researchers met this challenge by using the drones to relay signals emitted by a standard RFID reader. This not only solves the safety problem but also means that drones could be deployed in conjunction with existing RFID inventory systems, without the need for new tags, readers, or reader software.

Having so much inventory that you need to call in air support? That's a problem most job shops don’t have. For companies that want to move away from tracking via paper forms and manual entries into Excel spreadsheets, but that aren’t ready to make the move to RFID (let alone drones), there is another popular tracking method that is simple to use: barcode scanning.

The white paper summarizes and examines the pros and cons of using each method. You can access the paper at BellHawk Systems’ Web site, here (registration required).