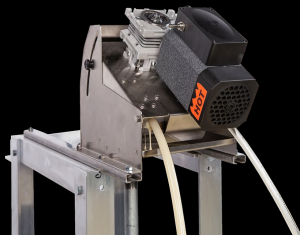 After helping customers to remove tramp oil from coolant for more than 40 years, Jim Petrucci, vice president of Oil Skimmers Inc., has yet to hear from anyone that doesn’t have at least some tramp oil present in an individual machine sump or large holding tank. When enough tramp oil seeps into coolant on a steady basis to justify the acquisition of oil-removal equipment, which is common, the Cleveland-based company offers oil skimmers to remove surface oil.

I interviewed him in connection with an article from Oil Skimmers for the Industry Briefs section of our May issue.

An oil skimmer that collects tramp oil offers an effective method to avoid the problems tramp oil can cause when it stays with the coolant, Petrucci said. For instance, when coolant containing tramp oil hits a tool in the cut, an oily mist can result.

In addition, if the tramp oil is not continuously removed but allowed to sit for an extended period of time, such as over a weekend, a layer forms on the surface of the coolant. “That is a breeding ground for bacteria,” Petrucci said.

He added that removing oil also extends the life of the coolant and coolant-filtration material, while enhancing the material's filtration efficiency.

A variety of oil skimmers are available, such as ones that employ a rotating drum, belt or disc, but Petrucci said a tube-type one is the most effective because the tube doesn’t follow a fixed path. Chips, fines and other debris can get into the coolant and form a dam of floating material on the surface, blocking the oil from reaching the collector. The free-moving and free-floating tube, however, crawls over the top of the dam or pushes underneath it to access and remove the oil.

Preventing or minimizing water turbulence and plunging in the coolant reservoir maximizes the amount of oil an oil skimmer removes. Turbulence hinders tramp oil from coming to the surface, where it’s collected, while plunging breaks tramp oil into small droplets, which makes it more difficult for all of the oil to reach the surface.

“If you take a ping-pong ball and a basketball and shove them both underneath the water, that basketball is going to fight to get to the surface a lot faster than that ping-pong ball,” Petrucci said.

While some shops may not want to have an oil skimmer running continuously, Petrucci recommends enabling the oil-removal equipment to start working at least a few hours before a shift begins. “The tramp oil will be separated from the coolant, and the skimmer can just start removing it,” he said. “There is no pumping action or plunging or movement that beats the oil back down into the water.”

Click here to request a white paper from Oil Skimmers titled “Remove Oil A.S.A.P. to Improve Your Process and Your Profits.”