MQL as a complement to flood coolant? 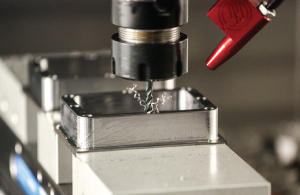 Standing in front of a ma-chining center, waiting for the drilling cycle to end so you can squirt some tapping compound into the holes is a big waste of time. But with challenging materials, such as Hastelloy or Inconel, it’s the only way to avoid a broken tap. Or is it?

Minimum-quantity lubrication, or MQL, has long been touted as an environmentally friendly and cost-effective alternative to flood coolant. MQL involves ap-plying a small quantity of oil mist directly to the cutting area, providing just the right amount of lubrication for efficient metal removal while removing heat from the tool/workpiece interface. But MQL can also be used to augment rather than replace flood coolant, elimi-nating the need for an operator to wait with squeeze bottle in hand.

Bryan O’Fallon, product technical specialist at Haas Automation Inc., Oxnard, Calif., said an increasing num-ber of shops are turning to MQL. “We recently intro-duced an MQL option on our machining centers, which works with the automatic air gun feature many of our customers are already familiar with. So instead of stop-ping the machine to apply some tapping lube, you can just turn off the coolant and use an M code to fire off the MQL. And for some applications, you can eliminate the flood entirely. It’s a nice option to have, especially with cutting fluid and fluid-disposal costs on the rise.”