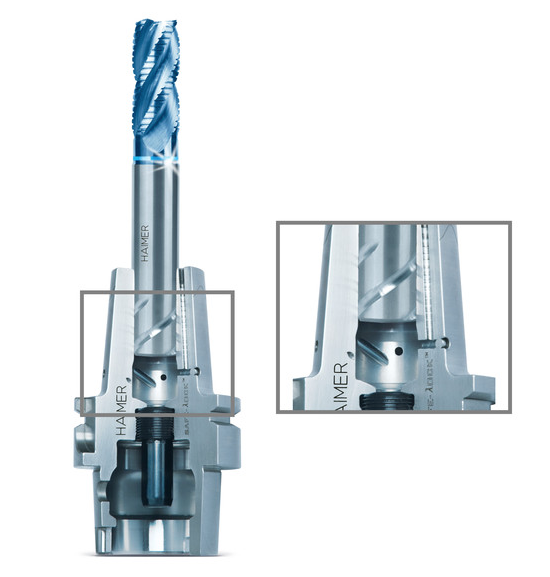 "We are very pleased to have entered into this agreement with the Melin Tool Co.," said Haimer USA President Brendt Holden. "The variable flute geometries utilized by Melin in their endmills lend themselves perfectly to the Safe-Lock System. I am confident that the Melin [Tool] customer base will welcome this technology and its innate ability to increase their productivity on the shop floor."

The MRR improvement, however, "can lead to a potential pull-out of the cutting tool during aggressive machining due to higher helix angles and increased cutting forces," the company explained. This led Melin Tool to look for a solution that enables the comany's endmills to realize their full cutting speed potential. That search led to the licensing agreement for the Haimer Safe-Lock System.

The Safe-Lock design in cutting tools and toolholders reportedly combines high-precision, shrink-fit clamping with a positive form locking mechanism. The design is said to prevent round cutting tools from being rotated or completely pulled out from toolholders during heavy machining, and results in a vibration-free machining process.

The Safe-Lock System, which debuted in 2007, experienced four times the growth during 2015 as compared to previous years, the company reported, attributing the growth to an increasing awareness of the technology's application beyond the aerospace industry. The Safe-Lock System reportedly offers cost and time savings in any typical milling application.