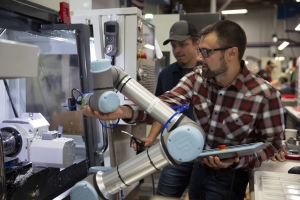 January is traditionally a month for new hope and new energy to meet life and business goals. But for manufacturers facing a new year with the lowest unemployment rate in more than five decades, it can be a tough time to expect workers to come back with enthusiasm from holiday celebrations to dull and menial tasks. That makes January an ideal time for National Cobot Awareness Month, said Stu Shepherd, regional sales director of Universal Robots (UR) Americas division. “It’s been more than 10 years since Universal Robots sold the world’s first commercially viable collaborative robot, but the cobot market is still largely untapped. By making January National Cobot Awareness Month, we want to send a signal to manufacturers that cobots are here to solve the monotonous tasks they simply can’t staff. With an average payback period of only six to eight months due to increased productivity, quality, and consistency, they can make their investment back and then some before year end if they start now.”

Most of us start the New Year with resolutions to improve our health and well-being, to better manage our money, to be more productive and satisfied, to help others, and to broaden our horizons and learn something new. Cobots can help manufacturers and their valued employees accomplish those goals.

While cobots’ built-in safety systems that allow them to work side-by-side with employees was the defining feature of collaborative robots, UR has expanded that definition to include user-friendliness, simple setup, flexibility for easy re-deployment and affordability. Today, UR cobots allow employees to move from repetitive, low-value tasks to higher-value activities that increase productivity and quality as well as work conditions.

“We’ve been the frontrunners of collaborative robotics since the term was adopted. While safety is imperative, that’s simply the cost of entry into the cobot market now,” Shepherd said. “We believe that being collaborative is just as much about being accessible, lowering the automation barrier by placing robots within reach of manufacturers who never thought they could deploy robots due to cost and complexity.”

One such manufacturer was Toolcraft, a machine shop in Seattle that found itself at a crossroad when a large order prompted the company to add a third shift for 24/7 production. “Nobody wants to run on third shift around here. When you put an ad out, you’re not getting very many responses,” said Steve Wittenberg, director of operations at Toolcraft, who is in an area with three percent unemployment. Toolcraft started looking at different automation options, initially considering traditional industrial robots.

“If we looked at just the robot hardware alone, that appeared to be a more cost-effective solution,” Wittenberg said. “But once we started factoring in the savings on not having to erect a safety cage – and the time saved on the ease of use, avoiding a lot of complex programming – Universal Robots ended up being the right solution.”

Fast return on investment continues to be a significant advantage of collaborative robots, and an opportunity for manufacturers to get a jump on their financial resolutions as well. Universal Robots customers around the world typically see ROI within the first year, with many seeing much faster return in just a few weeks or months.

“When we first started looking into automation, I was surprised to find that we could afford a six-axis robot – and a collaborative one at that,” said Joe McGillivray, CEO of Dynamic Group, an injection molding company in Minnesota that deployed UR cobots. “I assumed those systems cost hundreds of thousands of dollars, which was not the case. The return on investment on our first system was just under two months."