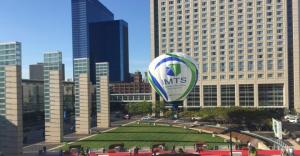 Despite my sore feet and the cold, overpriced sandwiches, I love the International Manufacturing Technology Show. The whine of the spindles, the smell of the coolant, the machine gun sound of the chips hitting the glass—these might not be the memories the exhibitors want me to carry home, but they stick with me the longest.

My first time there was in 1992. Although I haven’t been to every IMTS since, I’ve seen enough of them to observe some dramatic changes to the show, the industry and especially the technology each of us work with, peddle or, in my case, write about almost every day of the week.

In 1992, robots were used mainly by automakers. Today, robots are a common sight in shops of all sizes and becoming more so with each passing day. Additive manufacturing was a novelty; now there are 3D printers everywhere. Multitasking machines had not yet been invented. The internet of things was on dial-up. And Industry 4.0? We were still busy wrapping up the previous Industrial Revolution.

I’ve said it before, and I’ll keep saying it: If only I were 30 years younger, because now is quite simply a very cool time to be in manufacturing.

And yet IMTS in some ways makes me profoundly sad. As I watch the husband-and-wife team evaluate new equipment for their shop or the father and son drinking beer in one of the machine tool booths, arguing good-naturedly over the merits of linear servodrives or live-tooled lathes, I wonder if that could have been me and my family had my aborted attempt at shop ownership turned out differently.

It’s not simply shop ownership that I’ve lost, however. I learned what little I know about machine tool sales from Boyd Ehret, my friend and would-be mentor who was at that first IMTS with me and who I recently learned died at his desk a few years ago. I like to think he’d just wrapped up another big deal.

I think of Jerry Korinek, who once referred to the high-speed (at that time) maneuverings of our first CNC lathe as “exotic movements.” How we laughed. Jerry went in for gastric bypass surgery one day and never came home.

Similarly, chucker operator extraordinaire James “Red” Shoberg walked back to the sawing room one day to check on a job and hit the ground halfway there, dead of an embolism. I wish now that I’d kept the ’67 Chevelle I bought from him at our first job together.

There was Wayne Rude, who taught me how to ride a motorcycle and managed to keep his temper after I spilled his prized Yamaha dirt bike on the road next to his home in Elk River, Minnesota. He and his wife, Laura, worked with me at three different shops over the years, and his death from lung cancer hit me at a particularly bad time. Sorry about the scratches, buddy.

And of course there was my brother Kirby, who also worked with me at so many jobs. The garter snake in my desk drawer, the rubber vomit, the bottle rocket under the bathroom door and the subsequent chase through the shop—these were the things I thought about as I cruised the halls of McCormick Place in Chicago this month at IMTS. The ghosts of my brother, my friends and my co-workers kept me company in the crowded but sometimes lonely place.

How many others have slipped away since that first IMTS, people I worked with over the years but whose deaths I’m simply unaware of? If you’re listening, I miss you all. See you in 2020.