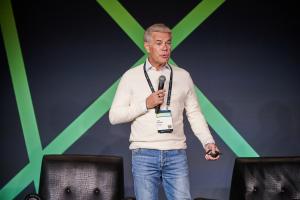 More than 3,000 Hexagon AB customers, partners, and colleagues, as well as members of the media, attended the Stockholm, Sweden-headquartered company’s HxGN LIVE Global 2022 conference at The Venetian Convention & Expo Center in Las Vegas June 20-23. In addition, Hexagon reports that more than 5,000 virtual attendees participated in the conference.

Ola Rollén, president and CEO of Hexagon, kicked off the conference with his keynote address titled, “What Stands in the Way Becomes the Way,” which focused on moving forward in a global environment significantly altered by the COVID-19 pandemic and seizing the opportunity to create a new paradigm where sustainability and profitability can coexist.

Rollén added: “I think accountability is what’s lacking, and that’s between you and me and everybody else in our generation. Now, we’ve seen the problem and we own the problem. We don’t want to be remembered as the CO2 generation — the generation that let everybody down and didn’t fix this planet. And we know how to solve it. So, what’s left? Well, it’s up to us to just go out and do it.”

Rollén continued his message of resiliency and responsibility at the media breakfast the next morning, where he began by discussing four trends for the next 10 years: from purchase to subscription, from digital twin to smart digital reality, from automation to autonomy, and from fossil fuels to renewable energy.

He pointed out the company’s airborne sensors as an example of the first trend, where a traditional hardware sales business is being converted to a digital subscription business. “We typically don’t sell that many sensors anymore, but we sell an awful lot of data that the sensors are capturing through our partnership network of companies flying around the globe.”

While automation has a multiple-decade history and is fairly well understood, autonomy is completely different, where the human dimension is cut out of a technological system executing a process, he said. “Which means that it’s self-sustaining. It’s communicating with other computers. Automation needs human input, but these systems are completely autonomous and sometimes they’re even self-healing when things go wrong.”

The fourth big trend, moving from fossil fuels to renewable energy, is “something super important for Hexagon, where we see that we can build a niche that is going to be very profitable and very powerful,” Rollén said.

He presented a photo of the company’s solar park in Spain, which is used to produce electricity and test new equipment such as the Leica BLK2FLY autonomous flying laser scanner to monitor the solar panels.

“One of the most important things, when you run a solar park is to have your solar panels be dust-free and the BLK2FLY can measure the dust,” Rollén said, adding that dust can reduce the yield by up to 20%.

During the following question-and-answer session, this editor presented a question that asked: “Has your perception about the sustainability of the planet’s natural resources and greenhouse gas emissions reaching a point-of-no-return doomsday limit in about 30 years changed since your keynote address at HxGN LIVE 2019? If so, why?”

Rollén replied: “I read an article the other day that it’s all doom and gloom when we talk about the global economy, and I guess most of you have kids or grandkids and they’re worried. But I read this article that says since 2010 we’ve been on a positive journey. All these windmills that you see everywhere and all these solar panels have made an impact, and if we continue on the way we’re at right now to implement new energy, green energy, and battery storage and the things we do, we are going to avoid the worst scenario, which was the doomsday limit with 3° C increase. Our trajectory right now is currently around a 2° increase in temperature and if we continue and even if we speed up we might reach the 1.5° target. So underlying, there is a very positive message on what all of us are doing today on this planet.”

HxGN LIVE Global 2023, the next such event, will take place June 12-15 at Ceasars Forum in Las Vegas.