Hainbuch is looking for gear manufacturers for tests with prototype mandrel

Hard work and first-class teamwork between the gear factory Hänel and Hainbuch have paid off. The new mandrel Mando G211 for gear manufacturers, suitable for gear hobbing, gear cutting and gear grinding, is available as a standard mandrel from stock and can be used optimally on gear cutting machines. Not only for Hainbuch was this project a success, but also for Hänel. This enabled optimization of manufacturing processes, reduced setup time and improved gear quality because the mandrel guarantees stable clamping and dampens vibrations. 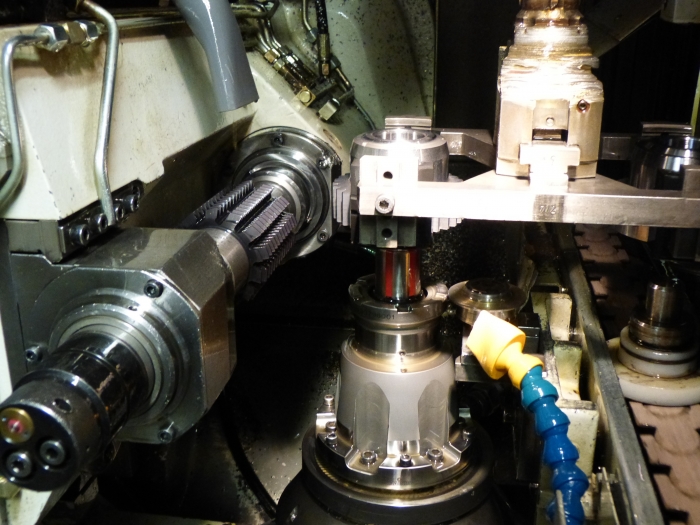 The Mando G211 mandrel on the Gleason Pfauter is suitable for hobbing. Photos courtesy of Hainbuch

Lucky strike with Hänel at the partner search

When a new product, in this case the Mando G211 mandrel, specifically for the production of gears, is to be launched on the market, it must be tested thoroughly under real conditions. Hainbuch was looking for a reliable partner for testing this prototype. One that is also open-minded about new things, places great value on precision and runs manufacturing processes on a high level. Hainbuch approached the gear manufacturer Hänel GmbH & Co. KG from Bad Friedrichshall, Germany, explained the situation and was well-accepted.

Jürgen Renner, production manager, said: "We have already had positive experiences with Hainbuch clamping devices. For us, the whole thing has sounded promising from the very beginning. We saw potential for improvements in our manufacturing and processes. That’s why we agreed. I must add, that our management is very open to such partnerships. If this results in rewarding optimization and keeps investments manageable, nothing stands in the way of such a project." 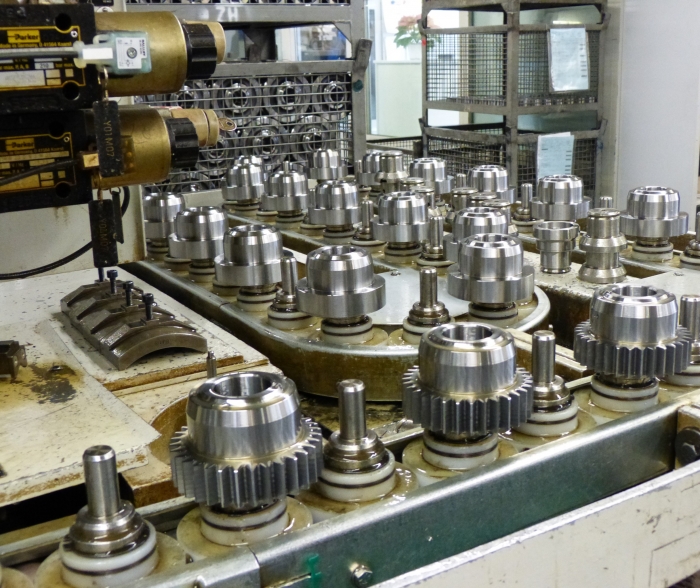 The automatic loading system with the gears on the Gleason Pfauter machine.

Prototypes were ready for the series

Hänel initially received two prototypes of the Mando G211 mandrel in sizes zero and two. The mandrels were tested on the Richardon R 400 manual loading machine and on the Gleason-Pfauter GP 200 hobbing machine with automatic loading to see if they would be compatible and work properly. Renner has to admit: "For our employees, this new clamping system was very strange. For 20 years, they worked with a clamping system from the machine manufacturer without radial clamping, which worked fine so far. For the first attempts, we had to make some adjustments to the machine. In addition, we did not reach our zero line on the Gleasen-Pfauter machine because the mandrel was too tall. As a result, adjustments to the machine and loading system were required. It also turned out that the mandrel had to be technically slightly optimized. What followed were a few conversations and phone calls with Thomas Steiger, product manager, and Hannes Ludwig, the responsible designer, both at Hainbuch. We have diligently tested and passed on all the information needed to further optimize the mandrel."

All design changes were implemented by Hainbuch. Subsequently, the revised second prototypes were made available. After a lengthy field trial and a few minor adjustments to the machine, the stiff and slender mandrel could, thanks to the use of Hänel, go into series production and be produced for stock.

Andreas Hoffmann from Hänel (left) and Thomas Steiger from Hainbuch have optimized the Mando G211 mandrel together from prototype to series.

At Hänel the batch sizes are between 30 and 1,000 pieces. Customers are buying their gears because of the precision. As a rule, these are hardened and ground gears. For this reason, the most important requirement for Renner was to save a single manufacturing step on this new mandrel, namely the rework.

Renner said: "With the current clamping system, we did not manage to achieve a good concentricity. The workpiece was pressed axially downwards. Now it is clamped with the mandrel from the inside, radially outwards. Thus, we have a higher stability within the clamping. This eliminates the reworking of certain components. For some of our orders, the old clamping system was good, because the concentricity was not so important. But basically, I must say, the better the concentricity, the easier it works later. With a normal hardened gear, the bore still needs to be reworked, but all the workpieces that are fully geared can now be reduced to one operation."

Thomas Steiger from Hainbuch (left) and Andreas Hoffmann from Hänel are already working on new ideas.

Renner estimates: "If everything is prepared, optimally the part family is in stock and can be processed one after the other; we will certainly save 50 percent of the setup time. Not only is the setup faster, but the process is also more stable and safer."

Andreas Hoffmann, head of toolmaking, sees even more benefits. "Thanks to better stability, we can drive partially higher feed rates. Even the tool wear is reduced because we have less vibration."

The collaboration paid off for Hänel and Hainbuch by the fact that both work on additional projects after these good experiences. "From the beginning, communication has worked out very well. We have always received prompt feedback on our initial protocols. Whenever we needed help or had to clarify something personally, Mr. Steiger was quick to get here«," Renner said.

Hänel now has six Mando G211 mandrels, the two prototypes and four standard mandrels in sizes zero to four. Hoffmann said, "All new components have been manufactured with the mandrel ever since. Even with older components, we try to change over to the mandrel clamping, because the segmented clamping bushings from Hainbuch can be delivered within one day. That’s a huge advantage for us."