Getting flexible and growing with automation 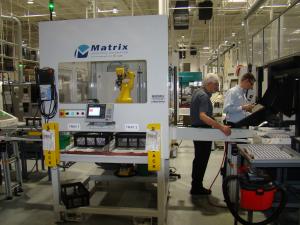 In connection with my article about flexible manufacturing systems for the February issue, I visited Camcraft Inc., which has a Makino Machining Complex (MMC2) automated pallet-handling system. Four Makino 4-axis a51nx horizontal machining centers are integrated into the system.

During the tour of the approximate 120,000-sq.-ft. facility, Janusz Ksel, director of manufacturing, pointed out that the Hanover Park, Illinois-headquartered company has 29 robotic installations. That makes sense not only because automation provides a host of competitive advantages for manufacturers, but also because Camcraft’s sister company is Matrix Design LLC, a producer of industrial automation equipment.

Prior to Matrix moving to its current 100,000-sq.-ft. facility in Bartlett, Illinois, which the company shares with Camcraft, I visited Matrix to cover the Matrix Deburring Application Laboratory. As noted in the article, the company created the lab to more effectively design automated deburring systems while streamlining the testing process.

With the assistance of automated processes, Ksel said Camcraft grows at a steady pace of about 5 percent a year. “There are years we contract due to the economy,” he added. “Then we go up, invest more and buy more equipment.”

And with some empty square footage at both facilities, space is available for more equipment. Ksel noted one addition will be another MMC2 system. “On that wall, I think I can fit eight machines, which would be in a pallet system,” he said while pointing to an open area. I suspect it won’t remain open for long.