Like many experts in the industry, Jeff Bennett may not be able to exactly define what a burr is, but he knows one when he sees it. Bennett is vice president of sales and marketing for Matrix Design LLC, which designs and builds automated deburring systems, as well as automated machine loading, palletizing and inspection systems.

The company recently moved to a 100,000-sq.-ft. facility in Bartlett, Ill., which it shares with its sister company, Camcraft, a high-volume job shop. 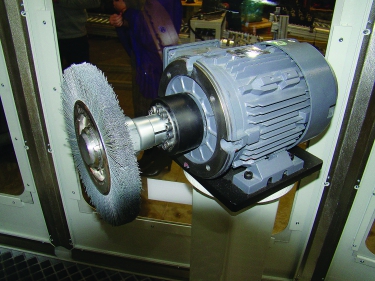 Having touch detection at the Matrix Deburring Applications Laboratory enables the speeds and feeds of a deburring brush to be automatically adjusted for optimal performance. Image courtesy of A. Richter.

Although there may be no absolute definition of a burr, Bennett said Matrix does categorize burrs into classes, or types, based on size and the force required to remove them. The first class consists of burrs so small they are hard to see with the naked eye. There are some classes, like the fourth class, which some people might not even consider a burr, he added. “It’s just material that’s maybe been rolled over or unwanted material that is sticking out for some
reason.”

To more effectively design automated deburring systems while streamlining the testing process, the company created the Matrix Deburring Applications Laboratory. Bennett emphasized that when a customer asks about automated deburring, robots take a back seat to the actual removal of the burr.

“We forget about the automation aspect of it and focus just on the deburring,” he said. “Once we have that process defined—and this lab helps us do that—then we worry about designing the system and coming up with an automation concept that will work within an end user’s facility.”

Developing the deburring process involves selecting from a host of deburring tools and determining the proper parameters to run those tools. The tools include various brushes and abrasive wheels that generate different results. “Deburring is very delicate,” Bennett said. “If you push too hard and give too much force, you start removing material that you didn’t want to remove in the first place. If you go too lightly, you might never remove the burr.” 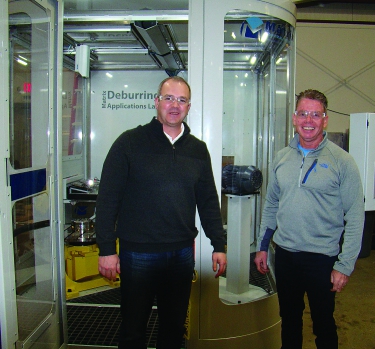 Jeff Bennett (left), vice president of sales and marketing, and Michael J. O’Reilly, vice president of operations, in front of the Matrix Deburring Applications Laboratory at its previous location in South Elgin, Ill. Image courtesy of A. Richter.

The software-based method that Matrix employs to accurately adjust how much pressure a robot exerts on the workpiece being deburred is called “touch detection,” Bennett said. “As soon as contact is made, the system knows that contact has been made and the robot can adjust its pressure.”

In addition, the deburring lab includes a servo-driven compliance spindle and an iRVision positioner. (The iRVision, from FANUC, provides accurate positional data for precision tasks.)

“A build board gives the visual ability to know where a project is at any given moment,” O’Reilly said.

Robots can’t deburr with the flexibility, dexterity and delicacy of human hands. However, the adaptive technologies at the Matrix Deburring Applications Laboratory appear to close the gap. “The human touch and feel are very hard to simulate,” Bennett said. “We are able to do it with some of the technologies that we’ve developed through trial and error over the years.”