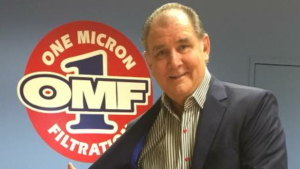 In connection with the article I’m writing about metalworking fluid filtration equipment for our March issue, I spoke with Irvin Kaage, president of Transor Filter USA, Elk Grove Village, Ill. The company provides the One Micron Filtration system, which removes particles larger than 1µm from oil, primarily for grinding.

“If you have a system that filters to 1µm absolute, then that takes out nearly 99 percent of all the dirt that’s in the oil,” he said. “Along with the temperature control that we offer that helps reduce the effects of heat on the oil, the life expectancy of the oil is indefinite.”

Kaage added that when the oil starts to exceed about 100° F (38° C), an end user loses about 10 percent grinding efficiency for each degree the oil rises.

He compared the differences of a fluid filtration system with a chiller and one without temperature control to two joggers who dress differently when exercising. One jogger wears shorts and a T-shirt while the other wears those same items but over a wetsuit. Both joggers have the same physical capability and cover the same distance, but the one wearing the wetsuit can’t dissipate body heat as effectively as the other jogger, becomes more fatigued and slows down.

Oil that isn’t kept in a range of plus or minus a degree experiences a fate similar to the oddly outfitted jogger. “It starts to sputter out, if you will,” Kaage said. “What you want is constant temperature of the oil so you have a predictable result.”