Usually, a grinding process can be improved by simply picking the low-hanging fruit.

Grinding wheel manufacturer Meister Abrasives USA Inc., North Kingstown, R.I., recommends trying that approach first by selecting a single variable and significantly changing it. Determine if making a change in one direction helps or hurts; then make the change in the opposite direction and document the result. If changes in that variable have little impact on the desired result, target the next one. Common process problems include taper, out-of-roundness, incorrect shape, wheel loading, poor surface finish, chatter and premature wheel wear.

However, after the low-hanging fruit is picked, a granular approach to troubleshooting is required to fix a specific problem. To find the proverbial needle in a haystack, Tom Cappadona, Midwest sales/applications engineer for Meister Abrasives, developed a spreadsheet with more than 80 variables that can be altered in numerous ways to fine-tune a grinding process. 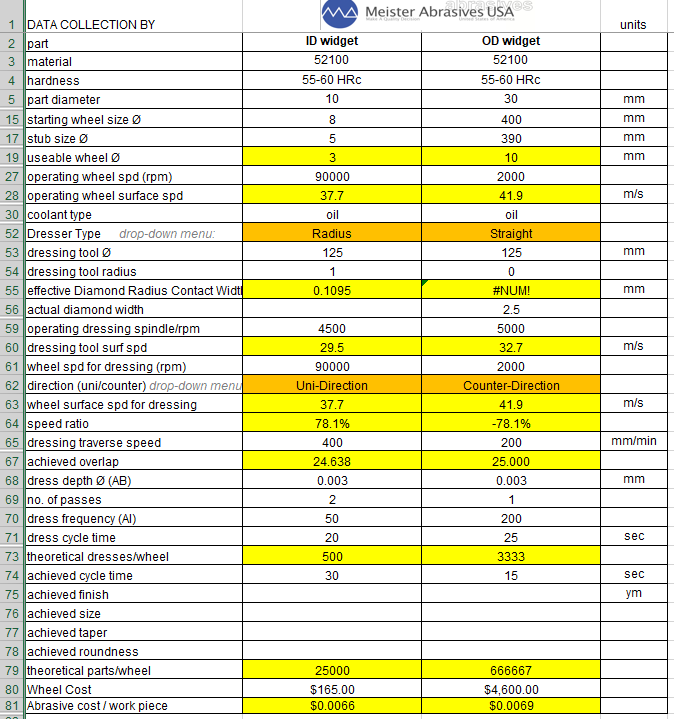 It’s critical to be able to effectively grind a part after dressing without any operator intervention to correct a wheel’s condition, Cappadona said. Possible interventions include slowing the infeed or reducing the feed override on the first couple of workpieces after dressing.

“By manipulating these conditions, we’re looking to take away some of that ‘sawtooth’ effect from the last piece before dressing to the first piece after dressing,” he added. “We want to be automated. Anytime you have human influence in the process, it is just a recipe for all kinds of variables.”

The challenges increase when grinding with superabrasive wheels compared with conventional abrasive ones, Cappadona said. “Superabrasive wheels tend to cut and like to be used aggressively, but they don’t like to be dressed.” As a result, a just-dressed superabrasive wheel often performs like a dull one. It pushes the workpiece material while imparting a fine surface finish until the bond opens again and the wheel starts cutting.

To cut rather than push material, he recommends more aggressive dressing parameters that crush some of the bond from the grit edges. An effective starting point is unidirectional dressing at a speed ratio of 80 percent. Another option is to increase the dress traverse speed.

Dressing also can impact taper formation. Dressing a bore wheel with a counterdirectional dresser, for instance, often shears the grains and creates a dull wheel, he said. A unidirectional dresser, however, breaks the bond from sharp edges of the microfracturing grits and “allows cutting to happen right off the bat. That gives a much freer-cutting wheel and will usually get rid of any taper. There are all kinds of little tricks that you can use to modify the results and get what you’re looking for.”