These advantages result in increased tool capacity and manufacturing productivity.

For example, horizontal CNC machines are equipped with massive ATCs compared to their vertical counterparts that ultimately drive a machine shop's productivity.

"The more tools you have on a machine, the more jobs you can have lined up," said Bernie Otto, Methods Machine Tools’ director of technical product support. "And that means less manual intervention and less changeover time.”

Many horizontal machine tool brands are equipped with ATCs that can be expanded the field. Machine tools offered by KIWA Machinery Co. LTD. have ATCs with a capacity of 120 tools. With technology from Methods, this capacity can be doubled. In as little as a day and a half, Methods' can upgrade that capacity to 240 tools. Similarly, CNC machines from OKK Corp. can be outfitted with another tool rack, raising the tool capacity from 60 to 120 tools.

“Expandable ATCs are versatile options that allow you to scale your machining capability as your shop grows,” Otto explained. “You don’t have to pay for anything you don’t need upfront, and when the extra work comes, you can double your tool capacity almost overnight.”

With a tool capacity well into the double digits, it's easy for a machine to handle many different jobs or implement redundant tooling to ensure a machine can run lights-out for extended periods.

Otto said that even without expandable ATCs, most horizontal machines are equipped with more tools from the get-go. Vertical machines typically start with 30 to 40 tools, while horizontals come with 60 to 90 tools standard.

“In most cases, going from a vertical to a horizontal machine automatically gives you a tooling advantage,” Otto added. 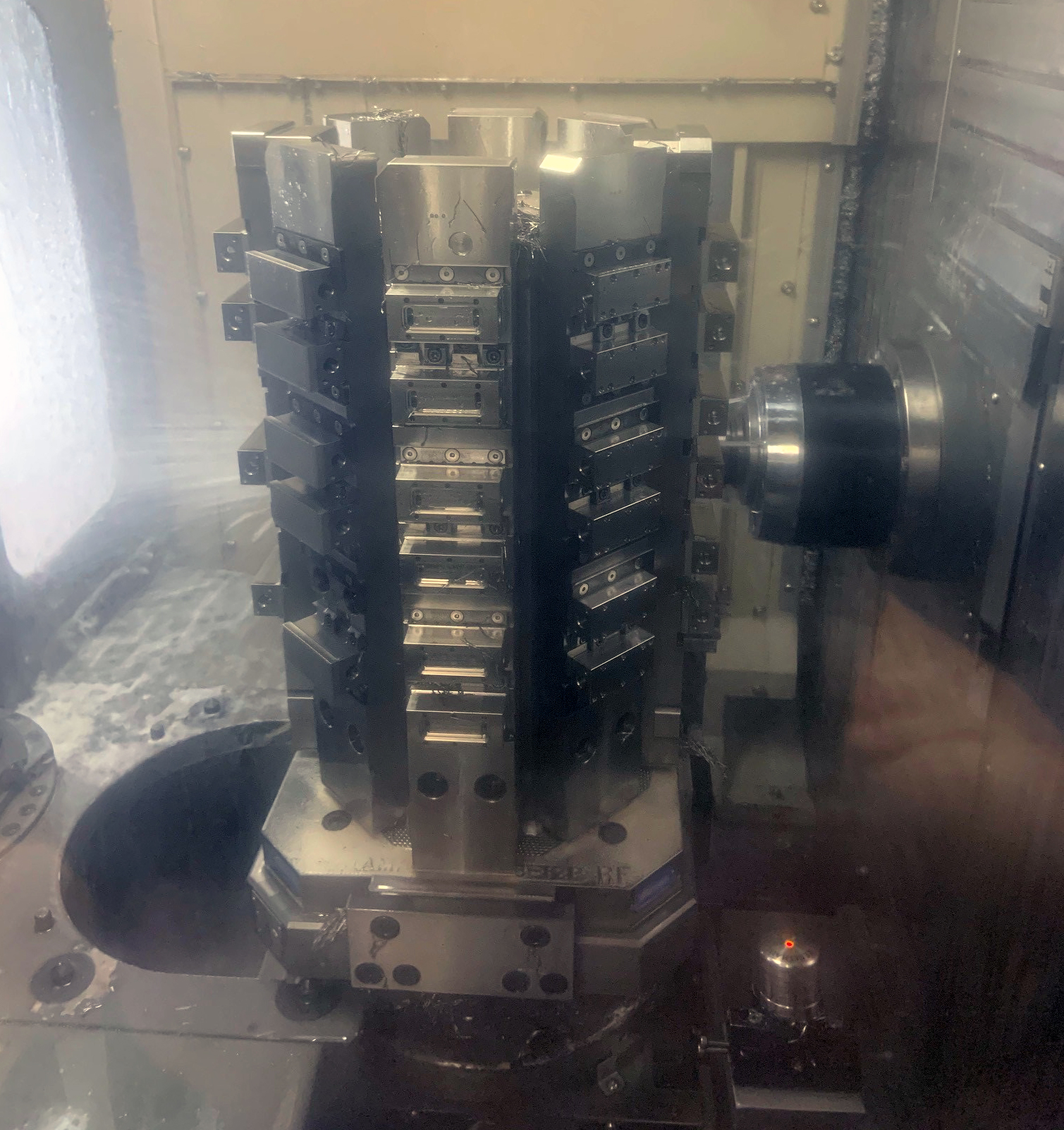 APCs are another aspect of horizontal CNC machines that machine tool suppliers can expand in the field. The majority of horizontal machining centers come equipped with a two-pallet pallet changer (PC2).

The reduction of part-handling alone is a stark difference. A stand-alone vertical machining center can reach about 40% efficiency, while a horizontal CNC machine equipped with a standard PC2 has an efficiency of about 85%.

While vertical machines can also be outfitted with APCs, horizontal machining centers are more adaptable.

Additionally, Otto said, horizontal CNC machines are more suited to linear pallet systems. These options are well designed for machines sharing a pallet pool or adding a significant number of pallets and pair well with a horizontal machine.

“Most verticals do not easily lend themselves to this kind of format,” he added.

Benefits of the B-Axis

Of course, the most apparent feature of a horizontal CNC machine is the B-axis, which allows users to machine multiple parts simultaneously using a tombstone.

A tombstone compared to a vertical machine offers more productivity, said David Moore, an applications engineer at Method Machine. While a cycle runs and machines numerous parts, the operator can prepare the next tombstone to maximize production.

“You can hit multiple parts in one setup instead of having to do each part individually,” he said.

Adding that axis opens up a world of machining possibilities. Whether you're looking to take on a larger workpiece, cut down your current cycle time, or accept a job with complex tool paths, horizontal machining should at least be an option.

“Anything with multiple setups that need to have three sides machined should be a candidate for horizontal,” added Moore.

Horizontal machining edges out vertical machining in several ways. But implementing a new machining process is a little murkier. Transitioning from vertical to horizontal isn’t as easy as flipping a part on its side.

“You have to open yourself up to new ideas and consider new options,” Moore said. “One of the worst things you can ever hear is ‘we’ve always done it this way.’’

One of the essential steps in determining if making the switch is appropriate for figuring out the return on investment. A horizontal machine may cost more, but it’s up to each shop owner and general manager to determine if greater throughput and lower cycle times are worth the money.

Other challenges, Methods’ Otto noted, include programming multiple parts per pallet and programming probe cycles. Horizontal machines feature side-faced programming, which allows you to program a specific tool path for each side of the workpiece.

You probably have to introduce more probing into your cycles, especially if you plan to run unattended,” Otto said.

To keep your spindles running as much as possible, it's important to have material ready to load for each fixture, ensure other departments can handle the increased activity, and have a stable chip management system.

“Feeding the beast is the number one challenge,” Otto added.

Working out the Kinks

One company that is reaping the benefits of switching to horizontal machining is Alicat Scientific, which  manufactures precision mass flow instruments such as flow controllers, mass flow meters, and differential pressure controllers.

In July 2016, Greg Camron, machine shop manager at Alicat Scientific, began looking at ways to increase throughput. Too many machine tool suppliers told him unimaginative ways he had already tried or told him it couldn't be done.

“The only thing I knew at the time was vertical machining, so that’s what they showed me,” he said. “Nobody else was encouraging me to try new things.” Nobody except Tony Harrod, general manager of Methods’ Phoenix, Arizona, technical center.

"Tony talked to me about different ways to machine our product," said Camron. “I found many different methods to do things, but only Tony showed me the benefits of horizontal machining and the great footprint.”

Alicat was equipped with five vertical CNC machines, one of which had a PC2 and a fourth axis. Camron found that the KIWA KMH 300 fit his machine shop's footprint and addressed machining challenges.

“The prices and the sizes were the factors that were limiting me,” he said. “Until I found the KMH 300, everything was huge. But in terms of floor space, switching from two vertical machines to one horizontal was a no-brainer.”

There was some trial and error with the first machine. Between figuring out the best way to implement tombstone tooling and workpiece holding, Camron ended up working 80 hours per week for a few weeks. Other aspects, however, were more straightforward. Since Camron used many "if/then" statements and loops in his CNC programming, the programs transitioned seamlessly to horizontal machining.

Learning the ins and outs of horizontal machining paid off. When other managers and directors realized the output one KIWA KMH 300 gave them, they asked Camron how soon they could get another up and running.

Less than two months later, the shop had another KIWA KMH 300. By the time Alicat received the second machine, Camron already had his fixtures and tombstones dialed in. The second KIWA was mass-producing quality parts within three days.

Soon, Alicat purchased two more KIWA KMH 300 machines, this time with PC6 pallet changers. The speed and versatility of the horizontal machining centers combined with standard automation solutions allowed Camron to shave approximately 50% off his cycle times compared to the vertical machines. Additionally, the automation allowed the shop to run lights-out during off-hours.

“The tombstone added a whole new dimension to our capabilities,” he said.

Eventually, Camron switched every machine to a horizontal machine.

“After the first one, I realized the restrictions of a vertical machine,” Camron said. “My imagination just opened up to everything possible in a horizontal."