Generally, when using abrasive wheels to grind parts, a dressing tool is required to maintain form and finish within specifications. Several options exist when choosing the type of dressing tool for an operation. These include single-point diamond tools, diamonds blade tools, form or plunge roll diamond wheels and “rotary single-point,” or “traversing rotary,” dressing.

Traverse rotary dressing of grinding wheels has many advantages, including:

Because of these advantages, this method of dressing has become very popular in recent years.

A plan view of the setup for traverse rotary dressing of grinding wheels is shown in Figure 1. 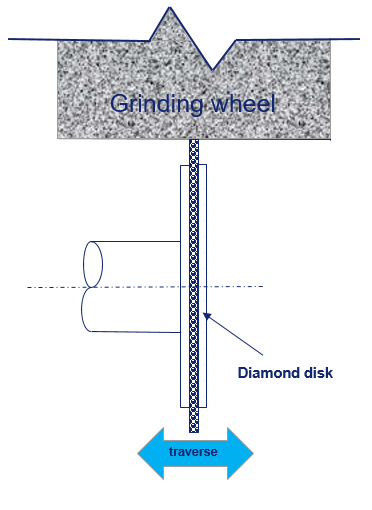 In a perfect world that would be the end of the story, but in any real mechanical system there are errors. In this system a number of errors can be introduced,including:

Because patterns that are a fraction of a micron deep can be seen with the naked eye on finished ground parts, these errors can cause undesirable visual patterns. The patterns can vary from "straight-line chatter" to "spiral" to "orange peel" defects.

A typical side view of a rotary dressing system is shown in Figure 2. 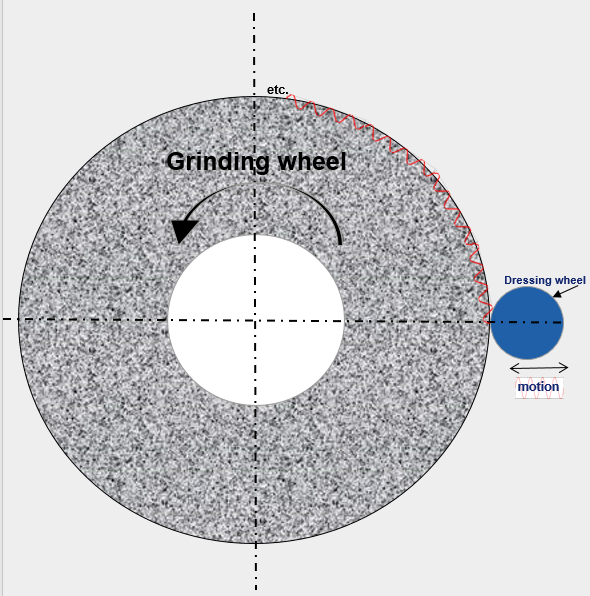 Identifying the dresser as the source of the problem can be done by counting or calculating the chatter marks on one revolution of a part and multiplying this number by the finish work speed. If the product is close to dresser speed or multiples of dresser speed, then:

This article only considers straight-line chatter caused by the dressing disk. A more general approach, which will address different patterns generated during dressing, will be covered in a separate paper.

To understand the mechanisms involved, two topics are important. The first is the concept of "overlap factor" (Figure 3). 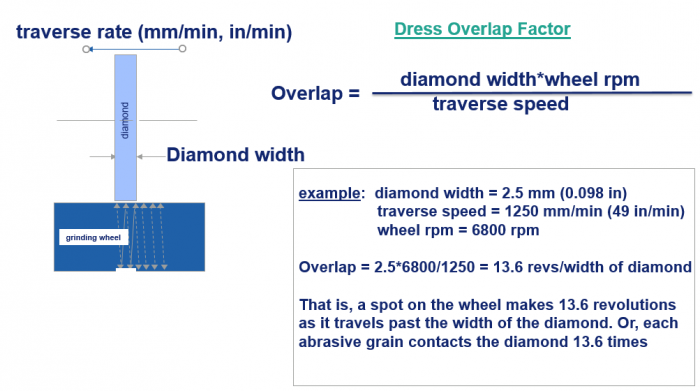 In the instance being discussed here, a wave pattern generated by the diamond would be over written 13.6 times as the dresser traverses by. So, how does this affect the pattern that gets transferred to the wheel?

First, consider what happens if the ratio of the wheel to diamond rpm is an integer (Figure 4).

The pattern will never change. The bumps and valleys on the wheel will match the high and low points of the diamond every time the wheel rotates, much like two gears meshing together. When this happens, the entire amount of the dresser "motion" will be imprinted on the wheel. In this case, the overlap factor will not matter, and straight-line chatter will be produced.

If there is a phase change, i.e. the ratio of dresser rpm to wheel rpm is not an integer, the amplitude of the pattern will be reduced as the wheel rotates multiple times. Figure 5 illustrates what happens when the ratio is an integer +0.5.

There are a number of interesting things to note about this condition: 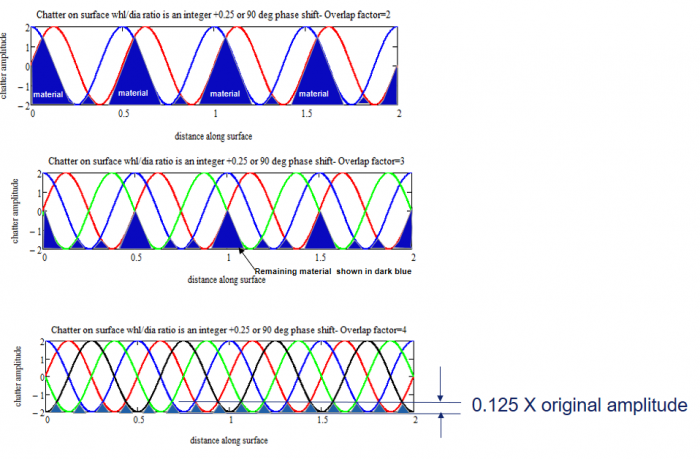 Using this method of analysis, these results can be displayed graphically. Using a wheel-to-dresser-rpm ratio of 1.083, Figure 7 illustrates what happens as the number of overlaps increases from one to 12.

Based on this method of analysis, Table 1 lists the phase shifts and corresponding overlap factors what will minimize chatter. 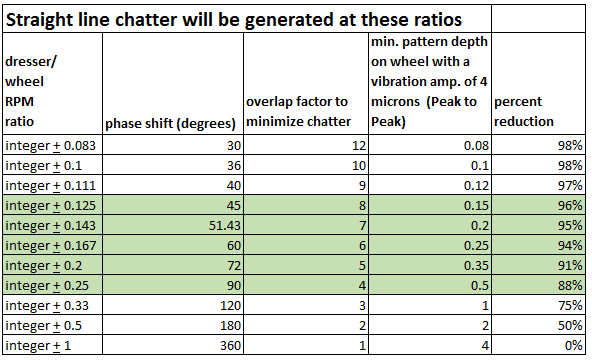 To bring this closer to implementation in the real world, several issues need to be addressed:

Some rules of thumb can be developed from this analysis. It appears that dresser to wheel ratios of an integer +0.08 to +0.25 would be the best range to be in. However, if the diamond/wheel rpm ratio is less than an integer +0.125, the ratio is too close to 1, a small error would multiply the chatter amplitude many times. Therefore, the recommended range is an integer +0.125 to +0.25 (the green highlighted area in Table 1).

The recommended overlap factor for CBN is three. This does not cover many ratios in Table 1, but, fortunately, CBN wheels generally “round up” diamonds, so dresser induced chatter is not a problem unless there is another disturbing frequency involved.

The Norton iGrind App, available as a free download at https://www.nortonabrasives.com/en-us/igrind, recommends 12 as the overlap factor for traverse rotary dressing of an aluminum-oxide wheel. This is a good place to start, as it covers all the dresser to wheel ratios listed in Table 1.