Global demand for toolholders, specifically arising from the automotive and defense and aerospace industries, will witness a relatively steady growth between 2018 and 2028, as predicted by a research intelligence report. While the demand for toolholders will be largely driven by emerging economies, in particular the manufacturing sector, China is likely to make substantial investments in high performance cutting tools, considering the robust manufacturing and industrial output in the region.

In other developing countries such as Philippines and Bangladesh, the positive scenario and policies, infrastructure, and steps, which are being taken to promote business, especially the manufacturing sector, will have a positive impact on the toolholders market offering huge opportunities for investors.

As per the report, the global tool holders market will top US$ 1 Billion by 2019. Moreover, growing demand for high precision products with increased output capacity is propelling the demand for advance tool holders in the global market, opines study. 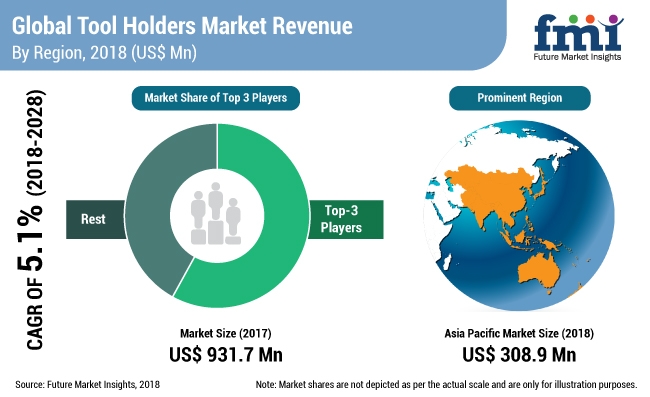 Key Market Insights at a Glance:

·      The demand for toolholders is anticipated to grow at a moderate pace over the forecast period.

·      Asia Pacific is estimated to hold a prominent share of the global toolholders market.

·      China will remain the largest consumer of machine tools, followed by U.S.

·      The toolholders market is consolidated with Tier-1 players accounting for significant shares.

·      The top three players of the market are estimated to account for more than a 50% market share.

·      On the basis of types of toolholder, hydraulic toolholders segment is slated to remain a high value – high growth segment.

·      In terms of end-use, general machining and fabrication and the automotive industries are likely to push maximum

·      BT flange taper will remain the most preferred taper type among CNCers, in terms of volume and value, given its high degree of accuracy and precision, in any high-speed machining operations.

Laser cutting, a streamlined and precision manufacturing process, is likely to pose challenges for toolholders given its ability to not just cut materials but also apply finish to a product. Apart from lower risks of material deformation or warping, since there is no direct contact between the material and the laser cutting device, chances of incorrect markings and contamination further reduces. Although laser cutting could be technically challenging and costly, end-use industries demanding high cutting precision such as automotive, are projected to replace traditional tool cutting equipment. However, high market penetration of relatively low cost tool holders

May restrict the demand for new and more advanced toolholders despite their high accuracy and ease of handling.

·      In a moderately consolidated landscape, Tier 1 companies such as Kennametal Inc., Sandvik Coromant AB and BIG DAISHOWA Group among others hold approximately 55% to 65% market share.

·      Key players are projected to focus on enhancing product quality by implementing new technologies, tough and long-lasting equipment and consumables materials with added features at a competitive price.