Wheel tests on the fly

Dear Doc: There’s lots of discussion at my company about the best diamond fluting wheel for grinding tungsten carbide. Is there a quick test to determine which wheel is best?

The Doc Replies: Few companies perform even a basic wheel test. In most cases, operators stick on the new wheel, grind a few parts, make some adjustments, finish out the wheel and then form a half-baked opinion. They don’t measure anything, so they have nothing to go on. Unless there are huge differences in wheel wear or heat generation, they’ll never know which wheel is better.

Although a solid test can take several days, you can conduct one for three wheels in just a few hours and make a reasonable assessment. First, true the candidate wheels with the same truing parameters. Next, grind a few parts at about half your standard feed rate. Then increase the feed rate in increments of 25 percent nominal and grind a few more. 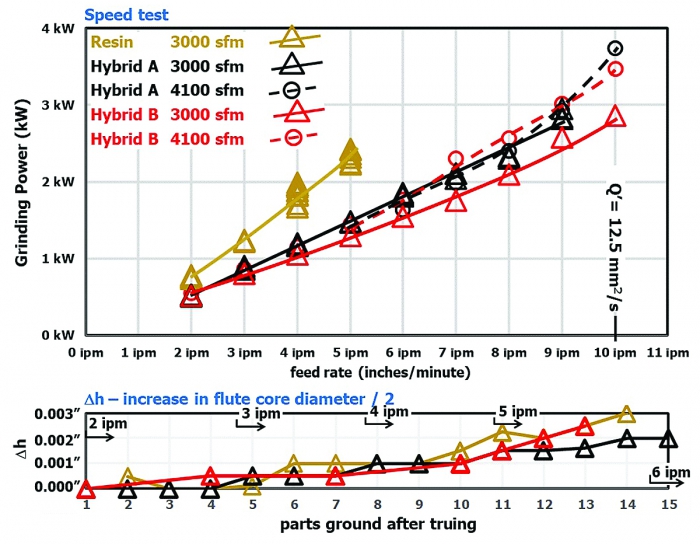 Measure the change in part dimension after every part to estimate wheel wear. Measure power, preferably with a real power meter, although the ammeter on the machine will also work. (Remember to subtract wheel-idle power.) Either measure or eyeball the surface finish. Do this for all three wheels, and plot the results on a spreadsheet.

In November, at the superabrasives education course for the Industrial Diamond Association of America Inc., Dr. Radu Coman and I evaluated a resin-bond wheel and two hybrid-bond wheels for grinding the flutes of tungsten-carbide tools. The surface finishes were all about the same. The results of grinding power and changes in part dimension are shown in the figure.

For a given feed rate, the resin-bond wheel generated far more grinding power (and, therefore, heat) than both hybrid-bond wheels. In addition, hybrid B seemed to perform slightly better than hybrid A. Generating less heat is not good if it leads to a lot more wheel wear. In our case, the wheel wear profiles were all pretty close.

Based on this quick test, we could say the hybrid wheels were considerably better than the resin one. Comparing hybrid wheels, hybrid B generated slightly less power but wore slightly more. It was a toss-up between the hybrids. At this point, we chose a faster feed rate and wheel speed (6 ipm and 4,100 sfm) and ground 50 parts with each wheel for standard production. The results were similar (not shown here), but hybrid A slightly outperformed hybrid B in that it consumed less power and wore less. We concluded that hybrid A was the better wheel.

I do these quick tests all the time. Sometimes the results are quite obvious—one wheel dramatically outperforms another. Other times, the differences are less obvious. But you’ll never know if you don’t measure anything.