The array of configurations is vast, but angle heads typically serve a common function: eliminate having to perform a separate operation to access a part feature when the workpiece can’t be indexed.

Faced with machining a feature without the ability to position the part so the feature can be reached and not wanting to refixture the part to perform another operation, where do you turn? To an angle head supplier.

“Sometimes there also are constraints based on part geometry or fixturing where you need an angle head to get into an area to do the machining, such as inside a bore,” said Mark Johnson, general manager of OMG North America, Post Falls, Idaho, a provider of multispindle heads, angle heads, turret heads and spindle speeders. “There might be features inside of the bore that you can only access by going inside with an angle head.” 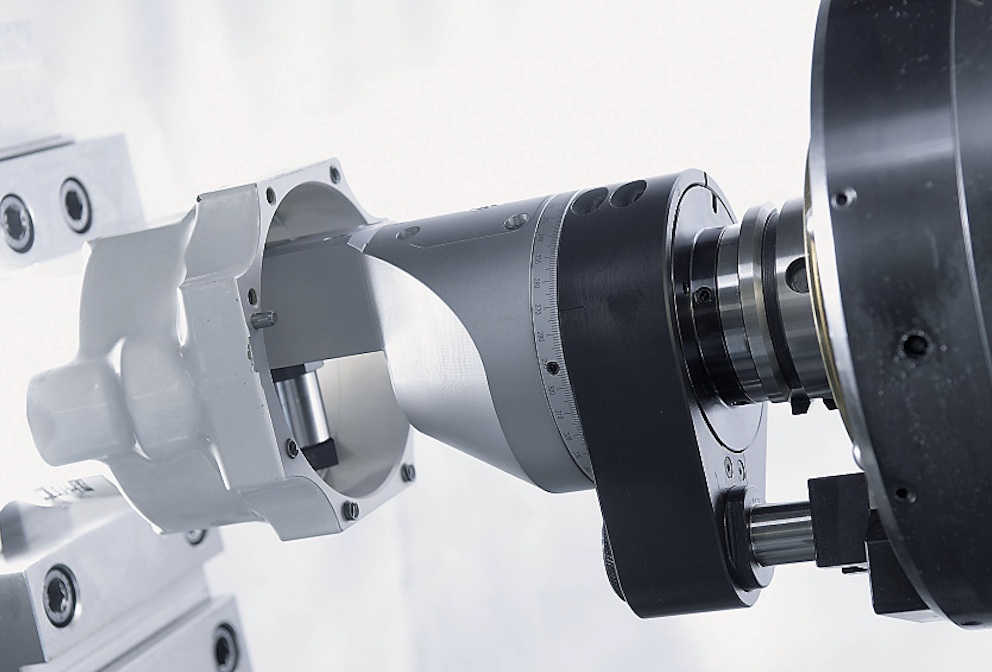 The applications for angle heads include milling, drilling and tapping, and while part manufacturers most frequently use them on 3-axis vertical machining centers, angle heads can also be found on machine tools with five or more axes.

Preben Hansen, president of Heimatec Inc., Prospect Heights, Ill., noted some large parts, such as dies and molds and parts for the energy industry, have numerous internal features, and the machining work is extensive enough to justify purchasing an angle head.

“A blowout preventer is a good example,” Hansen said. “The spindle can’t get in it so you either EDM it or buy an angle head. One of the two.” 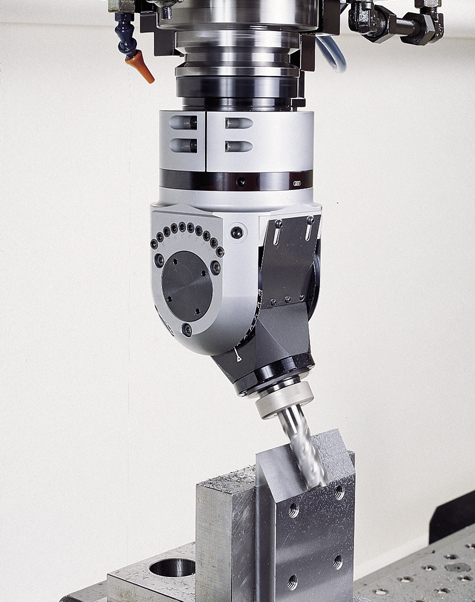 The output of this AGU90 geared angle head from BIG Kaiser can be adjusted in 1° increments, while the entire base is adjustable 360° to provide any compound angle. Image courtesy BIG Kaiser Precision Tooling.

He added that the introduction of advanced 5-axis machines made him think angle heads might become a machining relic. “There is still a good market for angle heads, and we’re expanding our offerings,” Hansen said, noting he’s seeing more requests for angle heads that can access small spaces and that can tackle large workpieces. “We’re developing a broader standard line that will address more of those applications.”

On the small side, Heimatec has angle heads for accessing a hole down to 1" (25.4mm) in diameter.

Even when having 5-axis capability enables machining a part in one setup, a 5-axis machine generally costs more than a 3-axis one, and an angle head/3-axis machine approach often allows jobs to be done at a lower cost.

“Instead of buying a machine that has that articulating head, they’re going to buy a 3-axis machine and a $8,000 to $10,000 angle head and end up with a machine to essentially do the part the same way with significantly less cost,” said Frank Cerrito, general manager for Koma Precision Inc., East Windsor, Conn.

The lower-cost machine might not last nearly as long, but the equipment can be amortized for the length of the job. “They have a project that’s going to go for a year, they buy a machine and make it last for a year and then they’re done with it,” Cerrito said.

Angle heads are typically swapped in and out of a machine tool spindle via an automatic toolchanger. “Our heads are designed to go through the toolchangers of most machining centers,” said Alan Miller, engineering manager for BIG Kaiser Precision Tooling Inc., Hoffman Estates, Ill. That includes specials, which are generally for the automotive industry and are set at a specific angle for a long production cycle.

In addition to fixed-angle heads, which are usually at a right angle, BIG Kaiser, like others, offers standard universal angle heads that are infinitely adjustable from 0° to 90°. “The angle heads can be positioned in any degree radially,” Miller said, “so you can make whatever compound angle you need.” 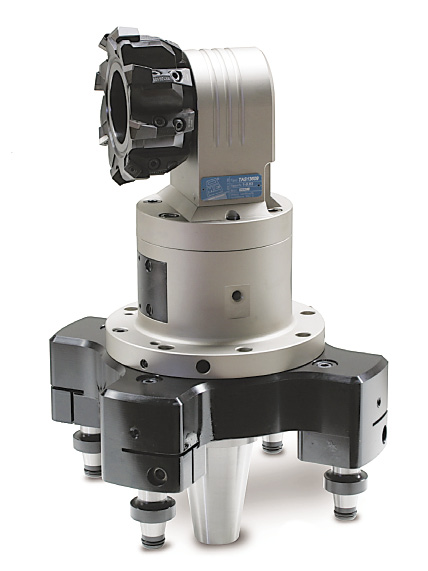 OMG offers the QuadBlock system, which has three face-to-face pin
contacts and a torque arm, for its angle heads, such as this
36-kg (79.4-lb.) one for milling a cast iron pump body.
Image courtesy OMG North America.

He added that an adjustable angle head provides the versatility to position the head instead of the part, but is typically only for light-duty applications, such as finish milling and drilling.

When an angle head must be too long or heavy that it can’t rely on a pull-stud mechanism for use in an ATC, the angle head is flange-mounted, or bolted, to the spindle face of a machine. “Some of these tools can weigh 100 lbs.,” Heimatec’s Hansen said, adding that lengths for specials can be up to 30" (762mm).

When flange mounting is needed, Hansen explained that an angle head manufacturer must obtain a spindle face drawing from the machine builder to determine the bolt-hole patterns already on the machine and build a head to match that configuration. “You can’t be drilling and tapping holes in the machine spindle face,” he said. “A hundred percent of the time it would need to be a special head.” 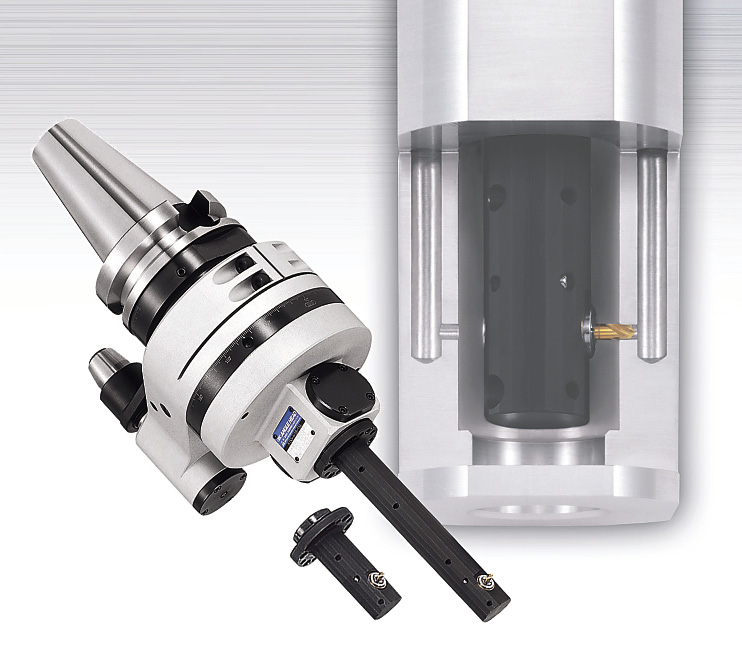 The Slender Drive fixed 90° angle head from BIG Kaiser has a modular design, where different output heads can be employed to provide the required clearance and reach into bores as small as 1.181". Image courtesy BIG Kaiser Precision Tooling.

However, those types of extreme applications are rare. “We sell 100 toolchanger tools to one flange- mount,” Koma’s Cerrito said. “It’s got to be a dedicated machine to do one operation only. There’s not that many people who can afford a machine to do just one operation.”

Koma offers Alberti angle head spindles with an arbor this is manufactured from one solid piece of hardened steel that increases resistance to bending stresses by 25 percent.

Sometimes an angle head doesn’t need to be flange-mounted but requires enhanced stability because of potential flexing that can occur, such as when a head is long and the standard torque, or stop, arm is insufficient to hold it in place when the cutting pressure is high. For those applications, Heimatec and others offers a three-point support system. Hansen explained that three pins, including the stop arm, are attached to an angle head, 120° apart around the circumference of the taper, and the pins press against the spindle face when the ATC places the angle head into the spindle. “It’s kind of in between a regular angle head and a bolt on.” 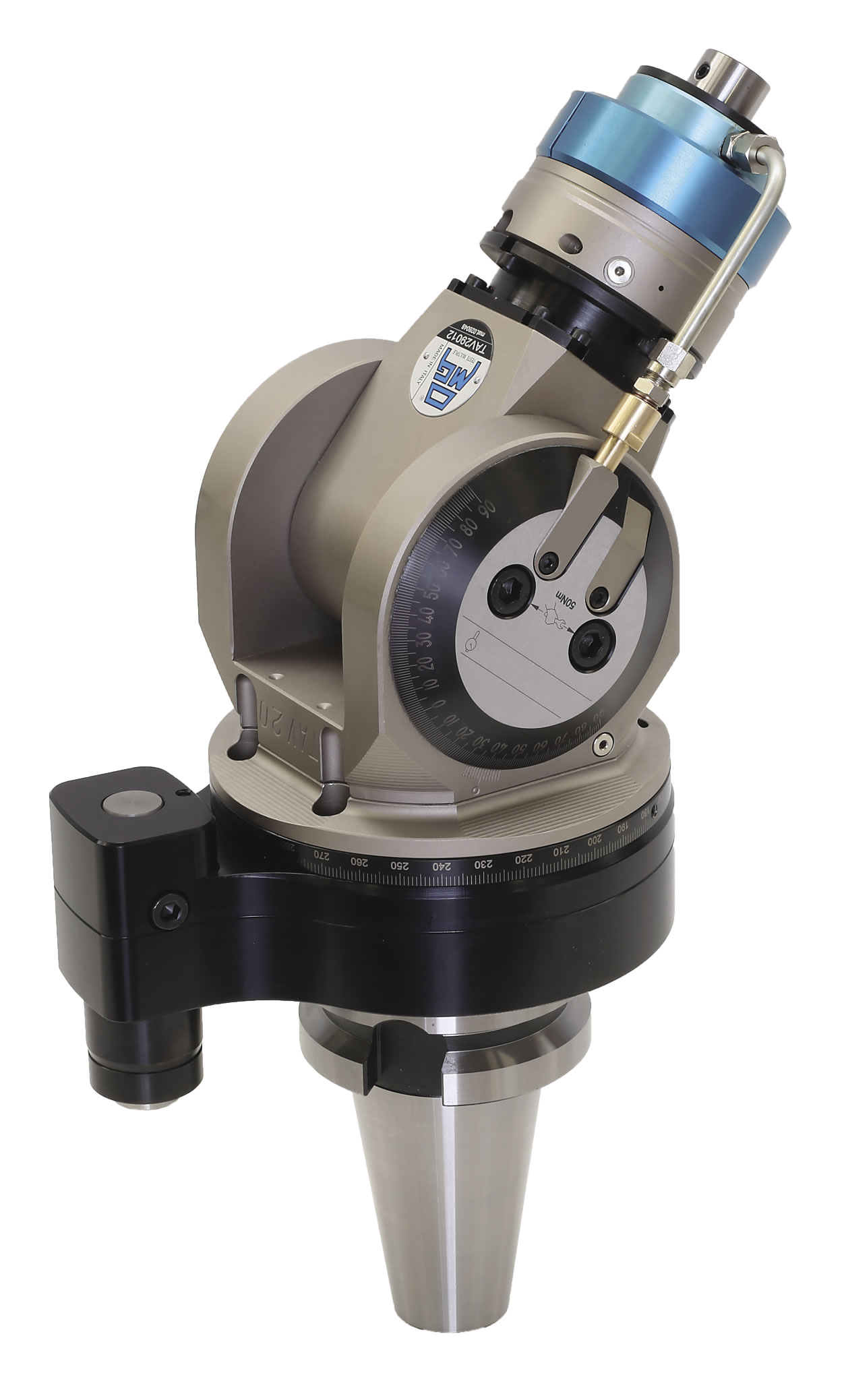 OMG offers a special adjustable angle head with a BT50 shank, an ABS25 output spindle
and a spindle speeder with a 6:1 ratio. The maximum output speed is 15,000 rpm.
Image courtesy OMG North America.

Although it’s not possible for either system to go through an ATC, Johnson added that it is possible to pick a head up from a cradle positioned on the work table. “You wouldn’t necessarily have to load it by hand,” he said.

Although an angle head can be driven by coolant, such as Titespot angle heads from Eltool Corp., the vast majority are gear-driven and can reach speeds up to 15,000 rpm or higher when outfitted with a spindle speeder.

Another option is a constant-velocity (CV) joint from BIG Kaiser. “The direct drive of that CV joint gives you very rigid spindle output,” Miller said. “You can drill more accurately, rigid-tap and mill much more efficiently.”

He added that an angle head with a CV joint is about 25 percent lighter and costs about 15 percent less than a comparable geared angle head. It’s available on an adjustable series of heads, but instead of being able to go from 0° to 90°, it will only swing from 0° to 30°. “That’s due to the limitations of that CV joint,” Miller said.

However, most angled applications fall into the 0° to 30° range, according to Miller. “Fully adjustable from 0° to 90° at any degree is a little more specialized.” 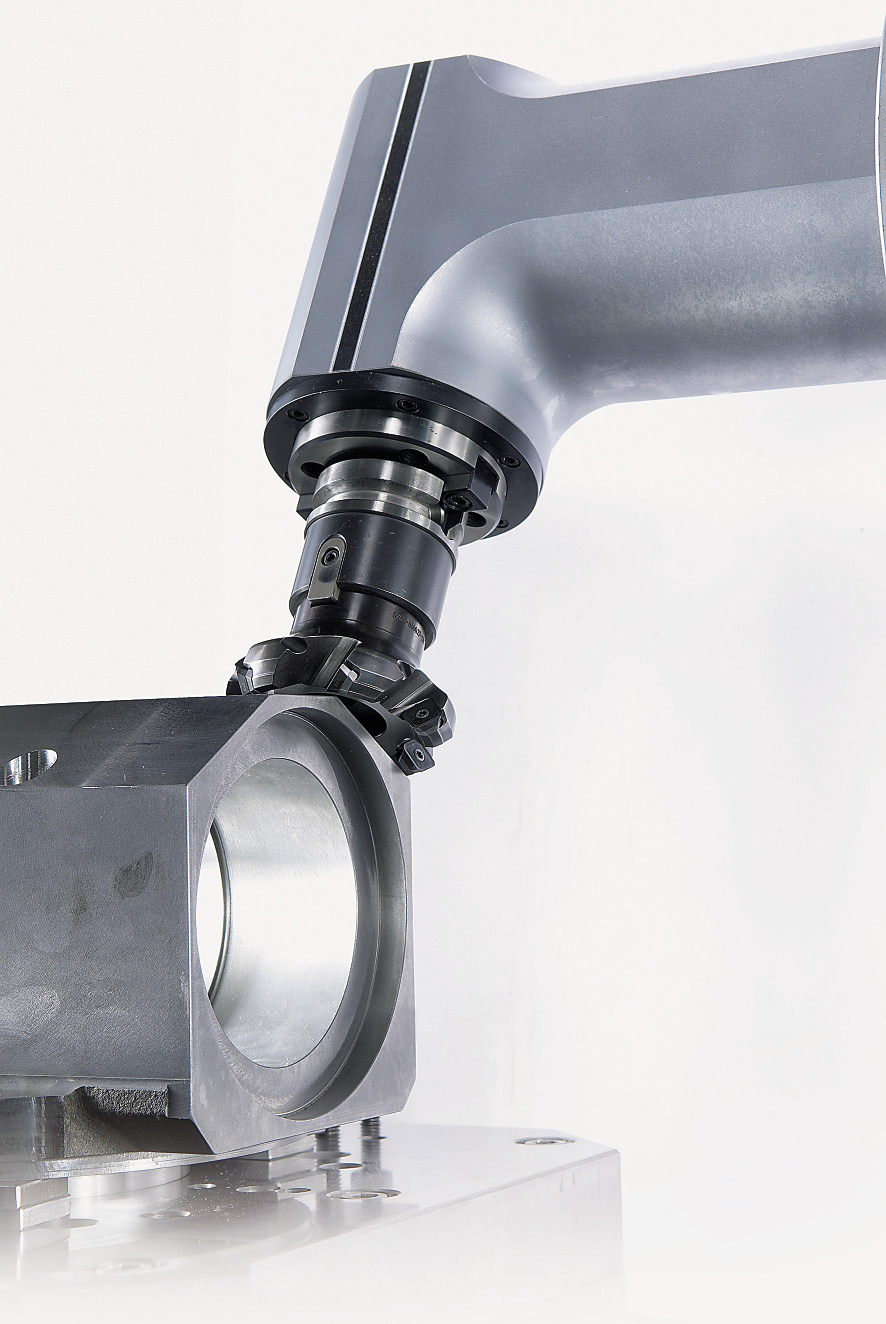 Facemilling is one application for which angle heads are suitable. Image courtesy Koma Precision.

As parts continue to become more complex, so have angle heads, with end users requiring more specials to achieve the complicated application requirements. Cerrito noted 80 to 90 percent of Koma’s angle heads used to be standard offerings compared to about 60 percent today. “Pretty much every special we do has to do with a physical requirement for fitting it into the part,” he said. “Whether it has to come close to a wall or bottom feature or reach past and around something, they just can’t get to it straight on.”

He added that each application requires a significant amount of information to determine which angle head, whether a standard, special or modified standard, will do the job. And while online ordering has helped streamline the process, it doesn’t stop there. “We do have online forms that the customer can fill out to get us started,” Cerrito said, “but pretty much every time we have to contact the customer and make sure we have the right head for the application.”

OMG’s Johnson concurred. “If someone asks for a large angle head on a small shank, we really have to find out exactly what the customer is looking for, because sometimes people try to spec something that is oversized for the machine they plan to do the work on. It’s important to get all the information from the customer to be sure we give them the right angle head for the job.”

When a parts manufacturer purchases a right-angle head, it’s usually not for a dedicated production operation. To allow a standard ER-output live tool to accept various adapters for different applications, Heimatec Inc. offers the U-tec flexible adapter system on its right-angle heads. This lets users quickly changeover tools on almost any lathe or mill, using a single live tool, without having to commit to a quick-change system on the initial purchase. 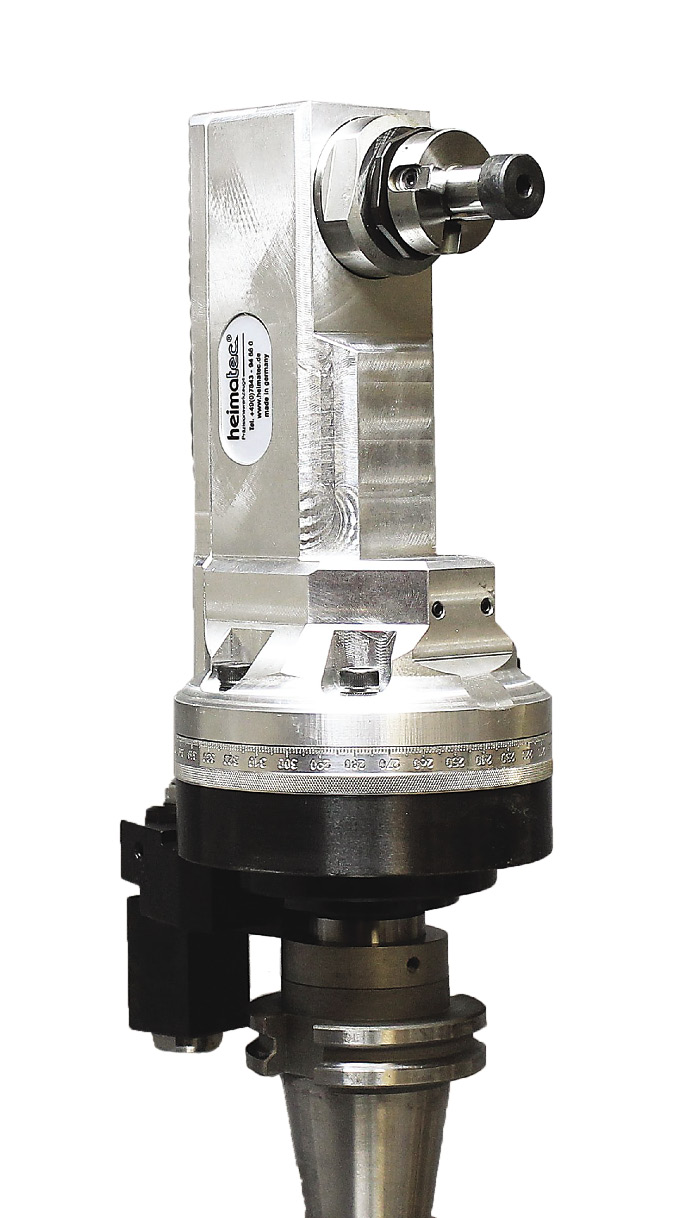 “Customers often want to do different things when they invest in an expensive tool like that,” said Heimatec’s Preben Hansen, “so we have a changing system built into it.”

This enables a user to take the ER collet out and put in, for example, a side-lock holder, an extension or a facemill, shell mill or endmill adapter, without the need to install a completely new base. “You can even do a drilling and tapping application with the same tool,” Hansen added. “You stop the program and change the insert instead of buying two angle heads.”

He noted the adapter system is especially beneficial to users doing deep-hole drilling with extended tools because of its rigidity and quick-change capabilities.