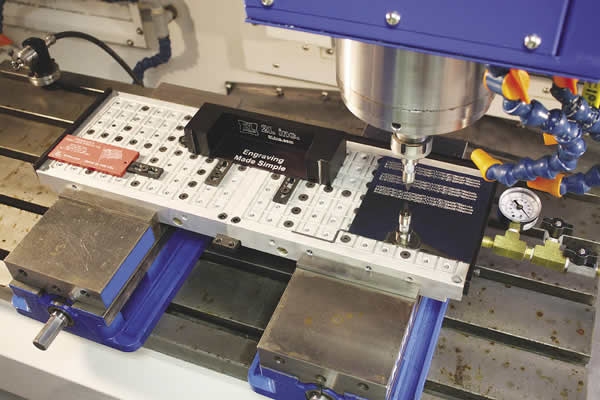 Vacuum chucks can be set up directly on the machine table or, as in this case, placed in conventional vises for fast changeovers.

Vacuum workholding is catching on in new and different applications.

Holding aerospace parts for milling, drilling and other operations is one of the most common applications for vacuum workholding. While thin-wall airframe parts and other components tend to distort when held in a conventional vise, vacuum systems literally suck the work down to the chuck surface, assuring flatness and dimensional accuracy.

Yet another common use for vacuum chucks is holding nonferrous parts for surface grinding—an application where ferrous components would often be held using a magnetic chuck.

“We’ve also seen applications on setup stations, where people just want to hold the workpiece in place while they set up the job, and for inspection on coordinate measuring machines,” he added. “On setup stations, users are often looking to avoid bolting things down. For CMMs, vacuum workholding is used mainly for delicate parts.”

Green believes the shift toward outsourcing and offshoring that accelerated in U.S. manufacturing in the 1990s also is a factor in increased use of vacuum workholding. In fact, he said, it was the main reason he launched Vac-U-Lok.

“We started this business 13 years ago to address the growth in short-run, job-shop work,” Green explained. “The number of small lots was going up, the 10,000- or 20,000-piece orders were going away and the easy stuff was going offshore. Vacuum workholding can help machine shops efficiently process those smaller lots and more complex parts by reducing setup times, reducing part handling and, in some cases, reducing the number of operations required for finishing parts.”

Green cited one example, a Chicago-area shop that needed to machine 200-piece orders of plastic medical components with a central milled pocket. The company was producing the parts, which were about 5 " long × 2.5 " wide × 3⁄8 " thick, by sawing to length and then holding the sawed blanks in a vise for machining. One big issue was scrap parts created when the pocket-milled parts deformed in conventional vises used to hold them for subsequent operations.

“The shop manager expected the job to take 2 weeks,” Green recalled. “They worked with us to install a 16 "×24 " vacuum chuck on their VMC, then bought sheet material that enabled them to machine 15 pieces at a time to within about 0.003 " of breaking through on all the edges. The final operations were breaking the pieces out from the sheet and deburring. They wound up finishing that job in 2 days, and scrap due to deformed parts was eliminated.”

Vac-U-Lok will soon relocate from Rockford to new headquarters in Greenville, S.C., to service the growing aerospace and automotive manufacturers in that area.

A typical vacuum workholding system consists of an industrial vacuum pump and a chuck with top plate, plus coolant return and safety devices. A common top plate is a perforated, grid-style aluminum plate that resembles the surface of an air hockey table. Users also commonly machine custom plates to fit their parts.

Regardless of top-plate configuration, polymeric gasket material installed in the top-plate surface creates a seal between the chuck and workpiece, preventing loss of vacuum. When the pump is turned on, about 13 psi of vacuum—roughly atmospheric pressure at or near sea level—pulls the workpiece against the chuck to compress the gasket material and maintain the vacuum seal. Total holding force depends on workpiece surface area, which explains why the technique works best for large, flat parts or for machining multiple small parts from large sheets of material.

Vacuum workholders used while machining with coolant also require a system to prevent coolant from being sucked into the vacuum pump. Finally, a safety device wired to the machine control monitors vacuum level and shuts down the machine if it reaches a preset lower limit. 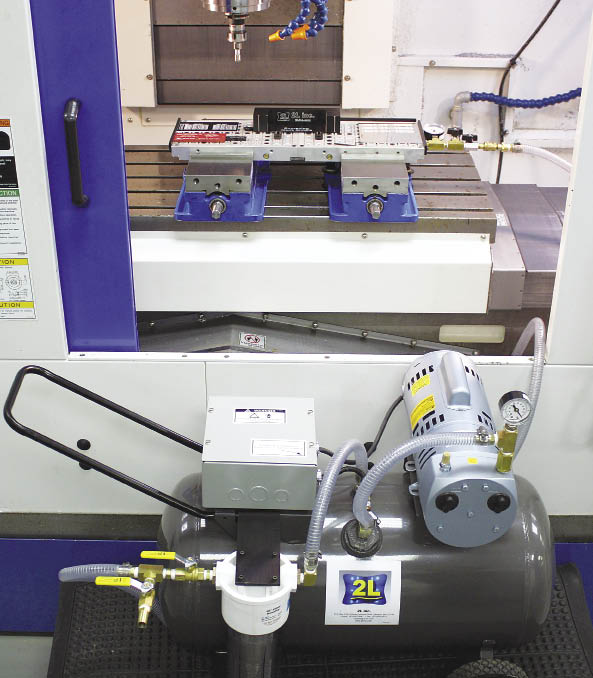 Typical vacuum system setup on a VMC includes a chuck (in this case, held by a pair of machine vises) and portable electric vacuum pump.

Not all vacuum workholders require vacuum pumps. According to General Manager Dave Bishop, VacMagic systems from Mitee-Bite Products LLC, Center Ossipee, N.H., eliminate vacuum pumps by using shop air to create the vacuum. “Every shop has compressed air, so we tried to make this a plug-and-play system,” Bishop said. The system also doubles as a pallet changer.

According to Bishop, some shops have switched almost exclusively to vacuum workholding. They employ multiple chucks and machine their own top plates for repeat jobs. “We have users who have more than 60 fixtures they have made and half a dozen vacuum systems to enable them to run basically any job on any machine,” he said. “These are manufacturers who have their own product lines and perform a variety of operations on their parts.”

All the technology suppliers interviewed for this article agreed that vacuum workholding is application-specific. This is mainly due to the nature of vacuum, which holds parts by literally sucking their bottom surfaces down against the chuck top plate.

“Vacuum fixtures supply a lot of downward holding force, but they don’t have as much lateral holding force,” explained Lance Nelson, president, 2L Inc., Hudson, Mass. “So if, for example, you are trying to mill a tough workpiece material such as stainless steel, you would need to use some kind of work stop or edge clamp in addition to the vacuum system or make multiple lighter cuts.”

According to Nelson, vacuum workholding works well for parts that are complex or unusually shaped as long as there’s a flat surface that can be pulled against the chuck. “You can machine five out of the six sides of complex parts, so shops are, for example, mounting vacuum tables on rotary trunnions,” he said.

Vacuum chucks are also commonly used for locating parts in aerospace machining and inspection applications. “Aerospace shops use the vacuum system to draw thin-wall airframe parts down against the top plate, so they know it’s flat, for example,” Nelson said. “A lot of people also use vacuum workholding on measuring equipment for the same reason.”

Designed to leak, the Vac Mat system consists of plastic mats covered with multiple small suction cups. The design minimizes loss of vacuum even if users machine through one or more of the cups.

Components that don’t lend themselves well to vacuum workholding applications include small parts, porous parts, components with multiple through holes and parts that don’t have a flat surface that can be pulled against the chuck.

As described earlier, users can get around the issue of vacuum-holding small parts with minimal surface area by using a large sheet of material and machining multiple parts from the sheet. “In that case, the last thing you do is break the parts out of the sheet,” Nelson explained.

Porous components or parts with multiple through-holes also can be a problem for grid-style vacuum chucks. For these parts, users can design a custom top plate to avoid open areas and minimize vacuum loss.

One product offers another way around the problem. “Almost all vacuum workholding systems are sealed in one way or another, but our Vac Mat system is designed to leak,” explained Bruce Thomsen, applications manager for IBAG North America, North Haven, Conn.

The product consists of a plastic mat with a series of small suction cups on top. Each cup features a 0.5mm-dia. hole in the center, and each essentially acts as an individual vacuum chamber. This setup lets users machine through the mat while losing vacuum in only a small area of the mat.

According to Thomsen, the system works well for parts about 5 " long on a side or larger and is modular. “Users can start with one mat, and simply plug more in as they need more capacity,” he said.

IBAG also offers other vacuum workholding products for specific applications, including porous chucks for holding thin work materials, such as foils, and for plastic workpieces. Users can select holding force by specifying the size and number of pores in the chuck material. “The downside to that system is, you cannot use any fluids,” Thomsen said. “That would clog the pores and make the chuck inoperative.”

In the right application, vacuum workholding can improve machining throughput and reduce scrap. The good news is, the number and type of applications where the technology can be used is ever-growing. CTE

About the Author: Jim Destefani, a senior editor of Cutting Tool Engineering and MICROmanufacturing magazines, has written extensively about various manufacturing technologies. Contact him at (734) 528-9717 or by e-mail at jimd@jwr.com. 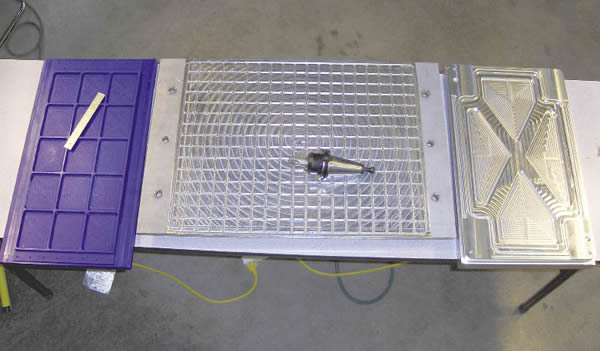 (From left) Wax prototype, vacuum chuck and rough-milled back of an aluminum ISS storage locker produced at WarrenTech for NASA. Tool shown was used for the majority of the machining, which was performed at 35 ipm with a 0.030 " DOC.

Vacuum workholding goes back to school

A few years ago, U.S. taxpayers were aghast to learn of rampant waste in defense spending, including such items as a $436 hammer and a $640 toilet seat. But have you ever heard of a $10,000 storage locker?

That’s how much the National Aeronautics and Space Administration was spending for aluminum alloy storage and training lockers used on the International Space Station until a NASA engineer came up with the solution: have students at technical and vocational schools produce the lockers. Thus was born NASA’s HUNCH (High School Students United with NASA to Create Hardware) program.

A new participant in the program this year is WarrenTech Career and Technical High School in Lakewood, Colo. “The astronauts on the International Space Station use these lockers to do experiments and for other purposes,” said Joe Martin, precision machining instructor. “A locker consists of multiple components with complex surfaces. Some of the parts have pockets only 0.030 " thick on the back.”

For Martin and student Alex Doman, who took the lead on the NASA project, one of the main challenges was holding the 7000 series aluminum alloy parts for machining without bowing or distortion. “We needed holding forces in the center of the part during machining,” Martin explained. “Flatness and parallelism tolerances are ±0.005 " across the surface of parts about 18 " square, so if the part twists or bows at all we would be out of tolerance.”

The solution turned out to be a vacuum workholding system on loan from Mitee-Bite Products. “There was just no other way to conveniently fixture the parts without distortion,” Martin said.

Doman and Martin developed machining processes for the locker parts and for the fixture top plates to hold them—a common operation among users of vacuum chucks. “The fixture is only about half the size of the part, so we needed some kind of vibration damping on the part ends,” Martin recalled.

Teacher and student have gone on to develop other fixtures to hold parts during complex contouring operations, and are still optimizing machining processes for locker components that will be produced during the 2010-2011 school year.