What does CAM software have to do with mowing your lawn? More than you might think. Consider this imaginary story in which a machine shop owner tackles that bane of suburban life.

It was a hotter-than-average summer day when he got back from his shop late one Saturday morning. He’d been doing a little cleaning up and a lot of paperwork, so his mind and body were ready for some rest and recreation. 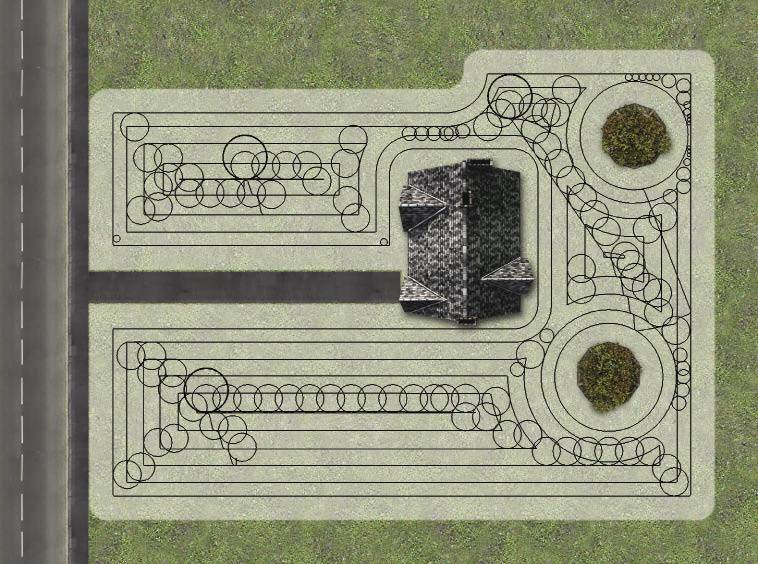 By cutting grass using a sectioning and swabbing strategy for the mover paths, less effort is exerted.

His lawn, however, had other plans. Neglected for more than a week, it was screaming, “Mow me!”

So the shop owner got out his electric mower and started to make the usual long, overlapping paths back and forth across the slope in front of his house—awkwardly avoiding the tree, getting the cord tangled in the bushes and struggling to make the turn when the cord snapped tight at the end of a loop.

When he finished 2 hours later, his knees were doing the screaming. “You’re not getting any younger,” they said. “Why don’t you hire a lawn service or at least get a riding mower. You own a business, for goodness sakes. You don’t need to be doing this.”

During the next week, he gave a little thought to his knees’ request for relief. He analyzed the problems presented by his lawn just like he would figure out how to attack tough jobs on his CNC equipment.

First of all, he wasn’t going to hire a lawn service or buy a riding mower. Those are expensive and most of the extra cash he’ll make this year is going back into the shop.

But he did need to replace his old mower, so he bought the smallest, highest-rpm model he could find. A small mower costs less than a big clunker, is easy to push and fits into tight spaces to minimize weed whacking—an unwanted secondary operation.

When the time came to mow the lawn again, he had a new plan of attack. Instead of trying to mow across the front of the bushes and flowers and around the big kite-eating tree, he used small looping actions. This cut most of the grass around the tree and shrubbery and left broad areas of lawn completely exposed for unobstructed cutting.

If any neighbors were watching, they must have thought what he did next was weird. Instead of taking long cuts with 50 percent engagement of the mower, he made several fully engaged cuts to break the lawn into small, manageable sections.

Then he invented a new zigzagging mower path that required little walking and no turning, but used the mower almost like a sailor swabbing the deck of a ship. There was no tripping over the cord, no struggling to make turn backs, but there was nearly full engagement of the mower on the forward zig and more than 50 percent engagement on the backward zag—very efficient. Overgrowth gave way to a clean-cut lawn with unprecedented smoothness.

He followed this sectioning and swabbing strategy from one side of the lawn in front of the house to the other, until it was completely trimmed. Then he looked at his watch. The new procedure had also taken 2 hours.

But there were some big differences. He wasn’t sweating, his back didn’t ache and his knees weren’t screaming. He had plenty of energy to take the family to the lake for a swim and a picnic.

One other thing—because he was not putting a huge strain on his body, the rhythms of mowing sent his mind to a dreamlike place instead of the usual black hole of complaining and self pity. In this magical place, the shop owner thought of activities he could do to improve his life and business. Apply smaller tools, which cost less. Use smoother and faster cutting actions. Take the strain off CNC machines so they last longer and require less maintenance. Let the high-speed cutting strategy help do the work. Take more precise cuts to eliminate scrap and costly secondary operations.

By learning to cut smarter, he was making positive change at home on Saturday morning and at the job shop during the workweek. CTE

About the Authors: Ben Mund is marketing manager for CNC Software Inc., Tolland, Conn. For information about the company’s Mastercam CNC software, call (800) 228-2877, visit www.mastercam.com or enter #340 on the IS form.