The Time is Right for Cermets

It has taken some time, but cermet inserts are finally finding their place as turning tools in American machine shops. U.S. users are learning that for high-speed finishing cuts cermets perform better than even coated carbide inserts, and their use reduces machining costs. In one application, for instance, a manufacturer switched from coated carbide to TNMG332 cermet inserts to turn 1043 steel and found that the number of pieces machined per cutting edge increased nearly 400% (Figure 1). Machinists also are finding a constantly expanding number of applications that are right for cermets. Advances in the formulation of cermets have broadened the tool material’s range, and the trend toward near-net-shape manufacturing, which requires only light stock removal, has increased the number of applications that can benefit from cermet’s unique performance characteristics.

Cermets are hybrid materials. Their name suggests a hardness like ceramic (the "cer-" part of the name) with a toughness like metal (the "-met" part). Manufacturers typically use titanium carbide (TiC), titanium nitride (TiN), and titanium carbonitride (TiCN) for the hard pArticles. Because these hard pArticles are very chemically and thermally stable, they impart a high degree of wear resistance to the cermet material. The cermet’s composition may also contain tungsten, tantalum, nickel, cobalt, aluminum, molybdenum, and vanadium as well as other materials. The binder usually includes nickel, cobalt, and molybdenum. The toughness of the metallic binder gives the cermet a shock resistance that exceeds the shock resistance of an exclusively ceramic material. Because the cermet can resist shocks better than ceramic can, cermet tools have a wider application range than ceramic tools have and are less likely to be damaged when turning with interrupted cuts.

Figure 2 compares the hardness and toughness of TiCN-base cermet to other cutting tool materials. As can be seen from its position near the center of the group of materials, cermet offers a balance between hardness and toughness. Its properties place it in the same group with carbides and coated carbides, but it is harder than the carbide grades.

Users must understand that cermets are not general-purpose cutting tools, however. They are most successfully used for finishing and light roughing applications. Cermets can be used to machine most types of steel and stainless steel. Cermets should not be used for rough copy turning. And, depending on the machining application and workpiece material, feed rates in excess of 0.012 ipr should be avoided, because thicker chips may damage the cutting edges. When feed rates approach the 0.010-0.012 ipr limit, the cutting speed should be reduced.

Cermet’s inherent brittleness has always been a challenge to developers who hope that a mating of hard pArticles and metal binders will yield a material with the desirable properties of both. Over the years, cermet manufacturers have mixed a number of components trying to produce a material that would be strong and resistant to oxidation at high temperatures and tough enough to resist shocks. Cutting tool manufacturers have been especially interested in finding a material that is both hard enough and tough enough to take the stresses and elevated temperatures that accompany increases in speed and feed rates.

Figure 1:One user was able to turn nearly four times as many steel shafts per cutting edge when he switched from coated carbide to cermet inserts.

In 1956, cutting tool manufacturers pinned their hopes on a new TiC/nickel-alloy cermet that contained molybdenum and carbon. The cutting tool material was able to perform well at high speeds and high temperatures, but it failed to win over users, because cermet was unable to endure interrupted cutting applications. Machinists inevitably compared the cermet tools to the tougher tungsten-carbide tools that were available then. They saw tungsten carbide perform satisfactorily even when their jobs involved heavy metal-removal rates, exotic materials, or older and less rigid machines. Because these same conditions chipped or shattered cermet tools, the machinists concluded that tungsten carbide was the better tool material. As a result, the popularity of cermet cutting tools faded.

Japanese users had a different opinion, however. For them, the limited range of cermets was not a severe liability. In 1960, when Mitsubishi, Sumitomo, and Toshiba began to sell cermet inserts in Japan, the tools quickly found their niche. Near-net machining and newer, more rigid machines were more common in Japan, and the use of exotic workpiece materials was much rarer. The Japanese acceptance of cermet cutting tools spurred manufacturers in that country to develop improved inserts with tungsten carbide and tantalum carbide added to make them tougher. They weren’t able to produce a cermet that was as tough as tungsten carbide, however, and so the use of cermet inserts remained limited to light finishing applications.

Another advance in cermet properties came in 1973, when Japanese producers began adding TiN to the hard-particle portion of the insert to create a cermet with a finer microstructure. This modification resulted in an insert with improved high-temperature strength and oxidation resistance.

All of these improvements have led to a cermet cutting tool that is ideal for users who want to crank up the speed on their lathes when turning steel. In a high-speed operation, the friction between the insert and the workpiece can raise the temperature at the cutting edge to 1000° C. Such heat can quickly degrade a tungsten-carbide tool’s mechanical properties. But high temperatures have less of an effect on a cermet’s hardness, transverse rupture strength, and oxidation resistance. In steel, the performance of cermet tools will even surpass that of coated tungsten-carbide tools. 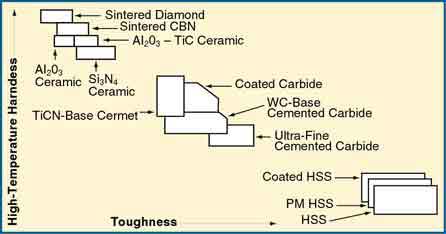 Figure 2:As this chart indicates, TiCN-base cermets are harder than tungsten-carbide and HSS cutting tools and tougher than diamond and ceramic tools.

Cermet owes its high hot hardness to the primary component of its hard pArticles, TiC. At elevated temperatures, the TiC compound’s hardness is comparable to any carbide, nitride, or oxide used in cutting tools. This hardness enhances a cermet insert’s flank-wear resistance. A cermet tool’s high transverse rupture strength contributes to its resistance to chipping or fracturing, but these problems are still the major causes of cermet insert failure.

With their lower value of free energy formation, cermet tools are better able to avoid crater wear, which is caused by thermochemical reactions between chips and the insert. These reactions occur at a much slower pace with cermet inserts. This is because the hard pArticles in the material resist diffusion on the tool’s rake face. The stability of the material minimizes oxidation and crater wear by making the tool chemically stable at high temperatures. Cermets also resist built-up edge, because adhesion corresponds to the amount of solubility of the hard material into iron. It is believed that low solubility makes it difficult for the workpiece material to adhere to the cutting edge of the tool.

Tungsten-carbide tools do have an advantage over cermets in one area. They possess greater shock resistance. Shock resistance is a function of the bonding strength between a material’s hard pArticles and its binder, and tungsten-carbide bonds are stronger. However, cermet manufacturers have greatly improved the binders in their products, and this has led to cutting tools that are shock-resistant enough to be used for milling as well as turning in interrupted cuts.

Speed is not the only reason users turn to cermets, however. The inserts can also be used to produce mirror-like finishes. The tool’s oxidation resistance reduces notching at the cutting edge in finishing applications, and this minimizes damage to the workpiece surface. The smoothness of the surface finish also is enhanced by the inserts’ ability to turn at high speeds and maintain a keen cutting edge.

Until recently, the idea of coated cermet cutting tools was not considered. It was assumed that a coating would not improve the cermet’s performance significantly, because the cutting tool material already contained the components most coating manufacturers use to create a hard protective shell around tungsten-carbide tools. But recent studies of coated cermets have shown them to be less subject to wear than uncoated cermets in certain machining operations (Figure 3).

After coating, the microstructure, thickness, grain size, microhardness, residual stress, and adhesive strength of the TiN coating were examined. It was found that PVD TiN coatings were of a considerably finer texture than those formed by the CVD method. Also, the hardness of the film deposited by the CVD method was low compared to the PVD film’s hardness. This was attributed to the diffusion of the binder metal from the cermet into the film, as well as the coarser grain size. The adhesive strength of the film deposited by CVD was low as well.

At least one coated cermet is already on the market. It is designed to turn various steels at low to moderate cutting speeds with or without coolant. This coated cermet insert is especially suited to the turning of carbon steel. The grade’s tough substrate ensures edge toughness and thermal shock resistance, while its PVD-coated titanium-compound layer provides for longer tool life and resistance to built-up edge.

Although R&D has produced cermet cutting tools that are far superior to those first introduced in the 1950s, they do not represent all that can be achieved. Cermet manufacturers, especially in Japan, are still quite actively pursuing further improvements. Their work ensures that future cermet cutting tools will have an even broader range of machining characteristics. 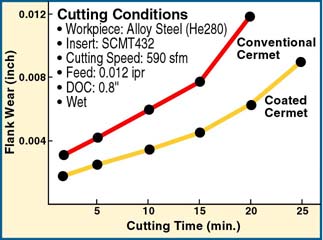