In the thick of things

Wolverine Machine Products Co., Holly, Mich., has manufactured screw machine products for the automotive industry for more than 85 years, but also has diversified into CNC machining and waterjet cutting. One of the shop’s two waterjet machines is a WardJet RX-3013 with a 156 "×360 "×10 " work envelope. The machine’s large capacity and Wolverine’s ability to work through challenges and apply innovative solutions landed the shop a job cutting a 50 "-wide × 108 "-long × 7¼ "-thick Invar 36 plate into 18 different rail-like pieces for tooling to form carbon fiber into a wing component for a jet. 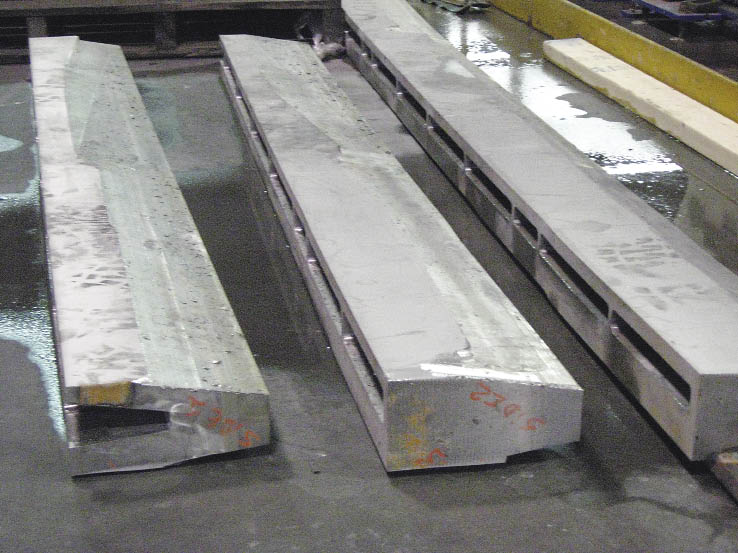 Workpiece material properties made waterjet cutting the most efficient way to cut through the 7¼ "-thick plate, according to Blaine Walker, special projects manager. “The workpiece was 36 percent nickel and very gummy,” he said. “I don’t think you are going to run an endmill through that.”

However, to reduce the amount of waterjetting necessary and lighten the workpiece, shallow pockets were premachined in the plate and edges were milled before delivery. Even so, the plate weighed 9,000 lbs. when it arrived. Wolverine welded steel plates with holes for lifting to the plate’s edges. “We have a lifting magnet,” Walker said, “but because the plate had pockets machined in it and it wasn’t a flat, solid surface, I didn’t want to take a chance with the magnet.”

Walker found a way for the lifting hooks to serve an additional purpose, using them to fixture the workpiece in the machine with two-by-fours wedged between the plate and the tank’s ¼ "-thick steel walls. Otherwise, the workpiece would have rested only on waterjet support grates made of 16-gauge steel set on edge. “The grates are thin, they flex, and you could push on the part and get it to move a little,” Walker explained.

Aligning the big plate in the machine also required some ingenuity. A lightweight, square-edged plate can simply be pushed or wedged into alignment with the waterjet’s X-axis. The massive premachined plate, however, was “not like a nice square sheet from a supplier,” Walker said. “It was wavy on the corners and edges.”

Walker solved the problem with the shop’s IGEMS CAM software. “You move the cutting head down to one edge of the plate near a corner, push a button and lock that coordinate in, move the cutting head down to the corner at the other end of the plate, jog it in Y and X because the material is misaligned and then pick that corner,” he explained. Although the line is not parallel to the machine axis, the software automatically compensates for any misalignment.

Wolverine’s customer had requested the part be aligned relative to two of the machined pockets. “We had to do some complicated manipulation in IGEMS, because if you connected the two pockets you ended up with a line that, looking at a clock, would be at a 1 o’clock angle,” Walker said. “I had to rotate the part in IGEMS so that when it went back to the controller software, it would come out right.”

The customer sent Wolverine a DXF file with the parts laid out, or nested, on the plate. Four of the parts were the full 108 " (9 ') long, six were about 3 ' long, and the rest were 6 ' to 7 ' in length. Part width was roughly 3½ ", but some parts featured curves to strengthen the molded carbon-fiber part. Part thickness varied from ½ " to 7¼ ". “The majority of the cuts were around 5 " thick,” Walker said. “We needed to know how thick the pieces were in different areas so that we could program the cutting speed. Thicker areas meant we would have to slow the feed rate and thinner areas allowed us to increase it, thus optimizing our cutting speeds and saving our customer time and money.”

Because no two parts were the same, the shop used only one of the four cutting heads on the RX-3013 machine. The speed of the water and abrasive stream is basically constant, but Walker noted Wolverine had control over how fast the stream was feeding through the material. The feed rate was 0.25 to 0.9 ipm.

Walker cut the part with crushed 50-grit abrasive, a coarse garnet. The crushed material’s sharp edges are more aggressive when cutting through thicker material. “Generally, we use a 0.014 "-dia. orifice and a 0.040 "-dia. nozzle. That seems to work unless you are doing something extreme,” he said.

The timeline for the job, however, was not wide open. After Wolverine quoted the job, “the customer called 4 weeks later on a Thursday and said he had this cutting to do. We had the material on a Monday and were cutting on Tuesday.”

The shop even ran some parts unattended, monitored via a video hookup to Walker’s home. “That was a first for us,” he said. “We ran 2½ to 3 hours with nobody here. We did it because the customer was under a time crunch, and we were doing our best to help them out.”

Waterjet cutting consumed 80 hours, with each of the longer parts taking up to 8 hours to cut.

Despite the challenges posed by the large workpiece, Walker said, “I like cutting this thick material. It is heavier so it doesn’t move around too much.” The thick workpiece also required few pierce points, each of which is an opportunity for the garnet to clog. “These pieces are so large that you have one pierce and then you cut for 3 hours,” Walker said.

About the author: Bill Kennedy, based in Latrobe, Pa., is a contributing editor for Cutting Tool Engineering. He has an extensive background as a technical writer. Contact him at (724) 537-6182 or by e-mail at billk@jwr.com