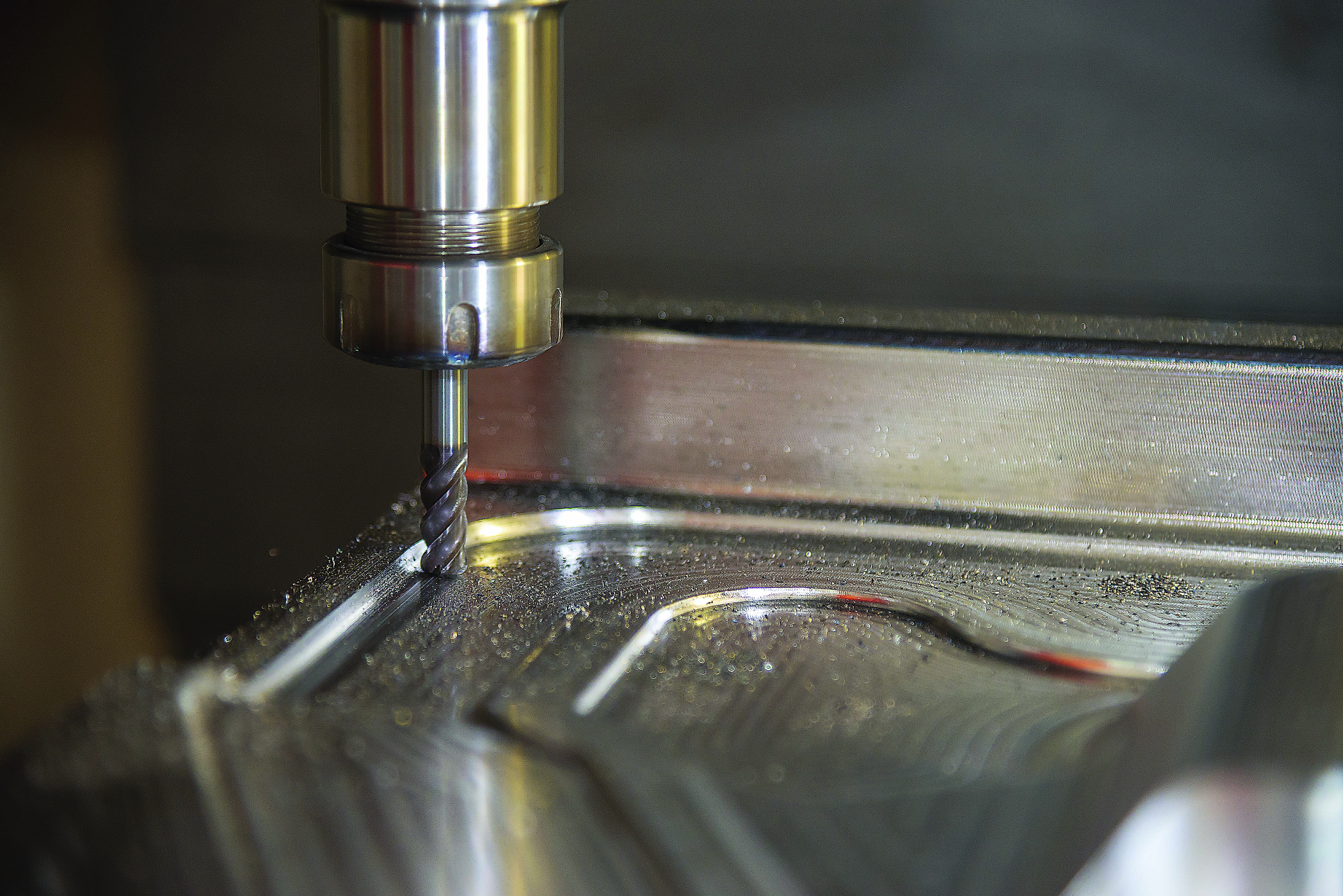 The conventional method of producing components from hardened tool and alloy steels has long been to rough in the soft state, heat-treat and then EDM or grind all critical features to size. But this decades-old paradigm began to change as cutting tools and tool coatings became more wear-resistant, toolholders became more accurate, machine tools became more rigid and CAM software became more capable. Pioneering machinists learned they could not only finish heat-treated mold and die components but rough them fully hard, significantly boosting productivity and reducing lead times

Corey Greenwald is one such machinist. When the owner of the small shop he worked at in 1995 purchased a Yasda vertical machining center, he began experimenting with what seemed impossible at that time: milling CPM tool steel hardened to 64 HRC.

“People thought I was crazy,” Greenwald said. “But within six months, I was able to produce punch tooling for connecting rods that previously required four separate operations and 80 hours of manual work. I’d spend a couple hours getting everything ready, push the green button and come in the next morning to a set of four completed punches.”

Greenwald was so successful at this underutilized, often misunderstood machining practice that in 2004 he left to start his own company, Hard Milling Solutions Inc., Romeo, Michigan. He’s since made hard milling a science, carefully building a database of feeds and speeds, step-downs and step-overs, chip loads and other operating parameters that allows his shop to machine virtually any hardened material unattended, without tool breakage and without failure “a majority of the time,” he said. 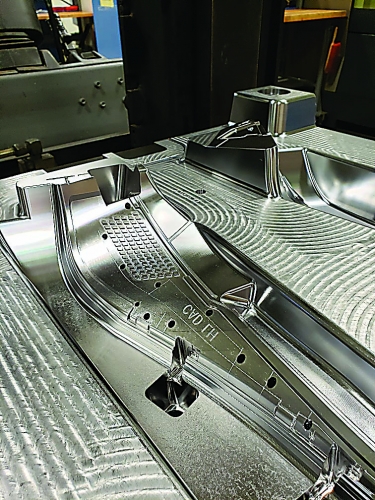 There’s more to Greenwald’s success than the right parameters, however. He said he was among the first to adopt remote monitoring technology, mounting cameras on each machine and equipping employees with smartphones and laptops so they could keep an eye on production from outside the plant. The team also makes extensive use of broken-tool detection and in-process probing, allowing verification of critical process steps and corrective action to be taken when something goes awry.

As a result, Hard Milling Solutions has machined everything from forging dies for the automotive industry and knee and hip implants for medical applications to tab tooling for can manufacturers. All parts are made of superalloy or equally challenging grades of hardened steel, and all have tight tolerances.

“We have a 12-piece order on our floor right now for an aerospace customer,” Greenwald said. “The parts are made of 60-HRC A2 tool steel and have 0.0004" tolerances all over the place. That’s a fairly typical requirement for us, but I have to say that every job is unique. Even today, we’re experiencing geometry and materials we’ve never seen before, so we are continuously being challenged. That’s what it takes to keep us engaged.”

If a shop wants to follow in Hard Milling Solutions’ footsteps, it likely will need to climb “one heck of a learning curve” as Greenwald did, although much of the technology he uses is now commonplace. High-quality CNC machine tools comparable to the Makino V56 VMC that he started his company with, for example, are readily available.

This HPC milling chuck with an HSK spindle interface is one of the go-to toolholding solutions for hard milling. Image courtesy of Guhring

Ernie Dickieson, technical sales representative at CAD/CAM provider Open Mind Technologies USA Inc., Needham, Massachusetts, agrees that hard milling is among the most challenging of all machining operations. But he thinks that it is not nearly as difficult as it was even five years ago.

“CNC machines are more robust and rigid,” Dickieson said. “The cutting tools are much better. Perhaps most importantly, there’s far more information available now on how to cut hard materials. And from the programming perspective, I think we and others have done a great job at creating toolpaths that are smoother and more efficient, taking into account the harder materials. Overall, hard milling has become a very achievable task for most shops.”

“Most modern CAD/CAM packages apply what is essentially a series of tiny triangles to the workpiece surface—a mesh, if you will—and use it to create the toolpaths,” Dickieson said. “But as machine tools have become better able to precisely follow programmed coordinates, mesh models can actually create a faceted appearance, something that’s problematic on very smooth surfaces, like those used for optics. With our latest hyperMill release, we’ve added the ability to create the toolpath directly on the workpiece surface, eliminating any faceting.” 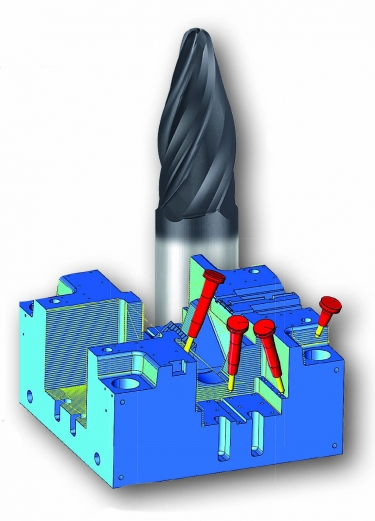 Dickieson noted that hard milling has traditionally been done on 3-axis machining centers, but this paradigm is beginning to change as mold shops and others embrace 5-axis machine tools. Because of this, he advises shops to rethink their CAM strategies in favor of software effective at tool center point control, collision detection and 5-axis smoothing functions. The type of cutting tool used also plays a role in CAM selection, he added, pointing to conical barrel cutters—also known as circle segment endmills—as an example.

“This is an area we as a company feel very strongly about,” Dickieson said. “Open Mind originally developed programming for barrel cutters to machine large planar surfaces in an efficient manner and presented the new process idea to Emuge to design a tool that would work with the programming. Since then, we’ve developed two machining cycles in our software specifically for conical barrel cutting and have just added a third with the latest release. It’s a very effective solution for moldmakers and others cutting deep, complex cavities.”

Another company that feels strongly about hard milling is Tungaloy America Inc., Arlington Heights, Illinois. Vic Dodd, product manager for rotating tools, explained that a number of new, often proprietary hard metals and coatings have hit the market of late—materials that require a new approach to cutting tools.

“It seems to me that a lot of parts are simply getting harder and more difficult to machine,” Dodd said. “Where molds were generally in the 38 to 40 HRC range a few years ago, we’re seeing more of them in the 45 to 50 HRC range today. And several of our customers have asked for help cutting the extremely hard coatings that some manufacturers are applying to plastic injection molds and forging dies. In certain applications, a ceramic milling product might be the first choice, at least until you get below the coating into the softer metal below.”

Even here, steps must be taken to resist the extreme abrasion and subsequent tool wear that come with machining hardened metals, lest tool life “be almost zero,” Dodd said. To this end, Tungaloy America has introduced an MH-style chipbreaker and multiphase coatings to its DoFeed line of indexable, high-feed cutters specifically for hard milling and has adjusted insert geometries as well.

“For the most part,” Dodd said, “this means a larger nose radius to increase fracture resistance, a larger T-land to reduce chipping and a neutral or near neutral rake angle for optimal edge strength.”

Whatever cutting tool is applied, Dodd mainly recommends dry cutting steel with an air blast to remove chips and using the most rigid, accurate machine tools and toolholders available.

Andy Moon, product manager for milling and GM300 at Guhring Inc., Brookfield, Wisconsin, said much the same thing, suggesting that a high-precision mechanical chuck is generally the best method of holding milling cutters.

“If you’re not down inside a pocket and aren’t concerned about holder interference, I’m most likely going to lean toward one of our HPC milling chucks,” Moon said. “These offer an extremely high level of rigidity, great clamping strength and—because of the mass and the size of the toolholder itself—good vibration dampening.”

Where greater reach is needed, Moon said shrink-fit toolholders offer the best compromise between rigidity and reach, although tool changeover takes several minutes longer and an investment is required in a shrink-fit machine. He also recommends that shops invest in a machine tool with an HSK spindle—the bigger the better—or at least one with a 50-taper if possible. Whatever the spindle interface, steer clear of ER collet chucks for everything except drilling applications, and avoid side lock holders for fine finishing work.

“The importance of a rigid spindle and high-quality toolholders when hard milling is the same as the importance of toolholders in regular milling but even more so,” Moon said. “Because the materials are harder, the cutting forces are greater, which means any runout, vibration or lack of rigidity will be amplified. I find that the shops that are doing well and making the most money are those that have moved to premium toolholders and good-quality machines. This is especially true when they’re faced with hardened steels and other difficult
materials.” 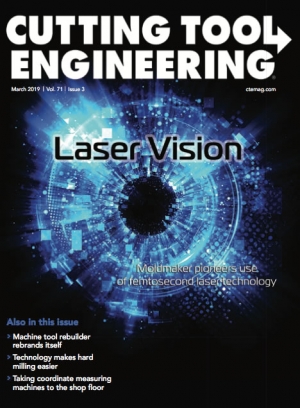