Roughly half of all drilled holes require application of a finishing tool to complete the holemaking process, and fine boring heads and reamers are two popular choices.

That hole finishing percentage is increasing based on part design requirements, according to Mike Smith, product manager – reaming and EPB toolholders and rough and finish boring heads for Seco Tools Inc., Troy, Mich. “We’re seeing hole tolerances getting tighter and tighter, whether they need to be or not,” he said, noting this is because manufacturers strive for increased precision in their components. 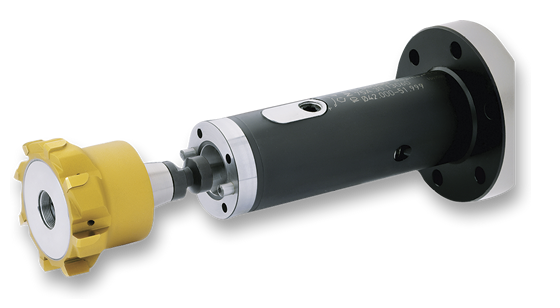 Courtesy of KOMET of America

A reamer functions by following an existing hole and removing metal along the way, whereas a boring tool finishes a hole by cutting its own path, but both types of tools can achieve the same specified tolerance and surface finish. For example, Smith explained, a solid- carbide fixed reamer is effective for achieving H7 hole tolerances and an adjustable, or settable, reamer is suitable for H6 or even H5 tolerances, similar to what finish boring can achieve. (The H system is for specifying hole tolerances and uses a tolerance zone, defined as a spherical zone restricted by the upper and lower limit dimensions of the part. The lower the H number, the tighter the tolerance.)

Although some reamers can be adjusted outward to compensate for tool wear, they are suitable for finishing a specific hole diameter and are not expandable to ream a range of diameters. “You’re not getting a lot of adjustment,” said Jacob Miller, product manager for Allied Machine & Engineering Corp., Dover, Ohio, which makes reamers. “You get 1 to 4 percent of the diameter, so if you have a 0.200 " reamer, you get 0.002 " of expansion. The expansion accommodates for wear, but also allows the tools to be reconditioned to the same diameter.”

Of course, that capability isn’t possible with a nonadjustable tool. “With a fixed reamer, if you have to recondition the OD at all for wear, you’ve lost the diameter,” Miller said. 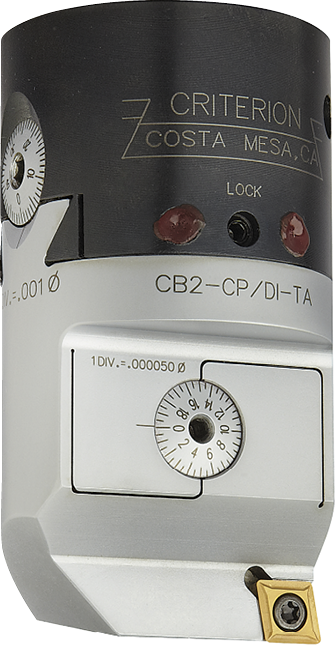 Nonetheless, William D. Fletcher, vice president of sales and marketing for Hassay Savage Co. – Magafor, explained that an end user can slightly vary the amount of material a fixed reamer removes by adjusting the reaming speed and feed to achieve a tighter tolerance. The amount of adjustment depends on the workpiece material and requires tests cuts.

The Turners Falls, Mass., company offers standard Magafor-brand solid-carbide reamers from 0.2mm (0.008") to 12.7mm (½") in diameter in 0.01mm (0.0004") increments. When run at the recommended speed and feed, the tools can achieve a tolerance of 4µm (0.00016"), according to President Robert Savage. He added that the reamers are uncoated and designed for through-holes, with a left-hand spiral and right-hand cut to push chips forward instead of pulling them back through the hole.

In contrast, one boring bar can finish various hole diameters by adjusting the boring head. But it’s not necessarily in a shop’s best interest to extend the diameter range by skimping on tooling. For example, an end user can bore a 1"-dia. hole with a ¼" boring bar, but the odds of tool deflection and breakage are greatly increased compared to applying a ½" bar, noted Mark Dalhover, manufacturing director for Monster Tool Co., Vista, Calif., which makes solid-carbide reamers and boring bars. This is because a small tool removing a relatively large amount of material for its size requires reduced machining parameters to deal with deflection issues. Instead, “you want to go with a tool that’s close to the hole size for rigidity,” he said.

Dalhover added that he sees a trend towards reaming instead of boring, even though one boring bar can tackle a range of hole sizes. “Traditionally, reaming is easier for most shops, which might not have more sophisticated equipment or be able to invest in multiple boring holders for boring bars.”

By acquiring additional boring bars, however, a parts manufacturer can finish a fairly wide range of diameters. Bob Wahlstrom, general manager for Criterion Allied Inc., pointed out that one popular boring head the Costa Mesa, Calif., company offers is suitable for holes from 0.035" (0.889mm) to 611⁄16" (169.9mm) in diameter with the use of 10 different boring bars. The toolmaker is a unit of Allied Machine and stocks boring tools for finishing holes from 0.035" to 21½" (546.1mm) in diameter. “Specials are available for larger diameters, but we’ve just not had anyone ask for anything smaller yet,” he said. “The day will come.”

Wahlstrom noted a boring tool can be adjusted to compensate for insert wear. “We have products that have 0.00005" adjustability on diameter.” 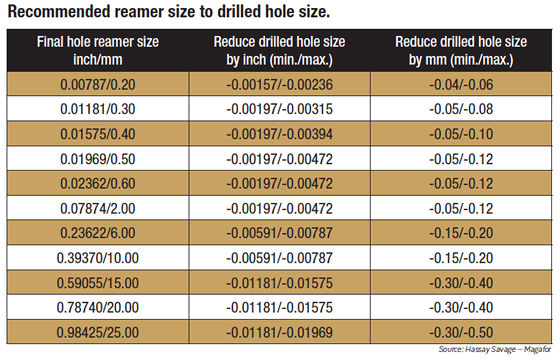 Because a boring bar can be offset, spindle and toolholder runout typically isn’t a concern—but controlling runout is when reaming. “TIR affects reamers but does not affect single-point tools,” said Mike Hunter, business development manager for KOMET tools, KOMET of America Inc., Schaumburg, Ill. As a result, he doesn’t recommend reaming on tired, worn machines unless an adapter with runout adjustment is employed.

Allied Machine’s Miller recommends a maximum TIR of 0.0005" when applying a reamer.

Too much runout when reaming causes a tool to work harder when cutting one side of a hole than the other because the chip load is greater on one side of the tool, explained Adrian von Rohr, business development manager for DIHART, which is KOMET’s brand of reaming tools. That negatively impacts surface finish and reduces tool life. “It’s easy to lose up to 50 percent of the tool life with a smidgen too much TIR,” he said.

In addition to shortening tool life, runout can cause a reamed hole to be out of tolerance. For example, 0.0002" of TIR when trying to hold a 0.0001" tolerance will either produce an egg-shaped hole or one that is 0.0002" to 0.0004" larger than required because the runout doubles when turning a diameter, Savage noted.

Fortunately, adapters can compensate for runout when reaming. “They’ve been implemented for decades and are easy to use,” von Rohr said. “When I show them to customers, they are usually surprised because the alternative is to replace or service the spindle.”

Fletcher added that a floating reamer will essentially self-center and avoid eclipsing of the hole, where a second circumference, or mismatch, occurs. “It lets the reamer find its home in the hole.”

To help maximize reamer life, toolmakers produce reamers that can cut a hole near its upper limit and wear down toward the lower limit, Seco’s Smith explained. “Obviously, if you’re near the high limit already and then throw in 0.0005 " of runout, you’re probably going to cut oversize, which would be a problem,” he said. “Not to mention it can cause a reamer to not cut properly because it’s cutting with one tooth vs. four teeth.”

Pump Up the Volume

Being able to cut with four or more teeth, depending on the reamer diameter, enables running at a feed rate four times faster or more than a single-point boring tool. In one rough cycle time study, KOMET’s Hunter determined that a single-point tool required 34 seconds to bore a 1½"-dia., 3"-deep hole compared to 3.7 seconds to ream it.

A reamer’s enhanced throughput could enable a parts manufacturer to eliminate the need for a new machine or enable buying two machines instead of three, according to Hunter. 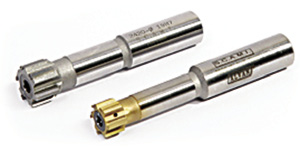 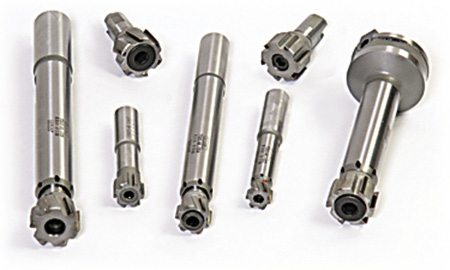 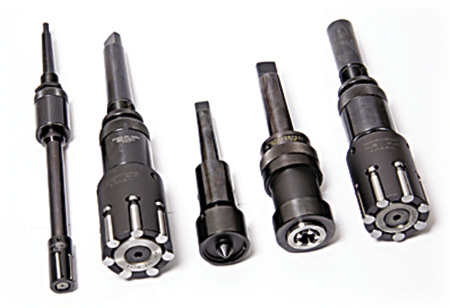 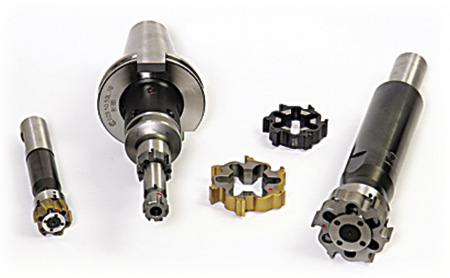 As a result, boring is traditionally a hole-finishing operation for lower volumes with reaming used for higher ones, but volume is in the eye of the beholder. If a job, for example, is for only 250 components but the customer repeats the job six times a year, it can qualify as high-volume production suitable for reaming, according to Smith. He uses the rule of thumb of 1,000 holes or components as the point when a reamer comes into play.

Smith described one high-volume application where a customer was finish boring 256 holes in each of several plates. To achieve the tolerance, the boring head required adjustment after every fourth hole because of insert wear. By switching to reaming, the customer eliminated tool adjustment while feeding five times faster because of the reamer’s multiple flutes.

“We determined that finish boring would have been the better option if they were machining five holes in a 10-piece job,” Smith said. “At that point, you could set the finish boring head, run your holes and put the head away for a different component down the road.”

However, even a run of five parts can justify reaming based on part quality requirements and reduced risk of scrap because no tool adjustments are needed, according to von Rohr. “It’ll be first part, good part,” he said. “The risk of scrap is higher with a boring tool than with a reaming tool.”

High-value parts, such as aerospace components that may have a material-and-time worth of $60,000 when the finishing tool touches it, might not be able to be repaired if a mistake were made, von Rohr said.

Magafor reamers are designed for through-holes, with a left-hand spiral and right-hand cut to push chips forward instead of pulling them back through the hole.

Nonetheless, tool choice when finishing a hole usually isn’t an either-or scenario. A hole with a tight and critical straightness tolerance might need to be bored prior to reaming, again, because a reamer follows a hole. This is especially true for holes with a critical straightness tolerance and a 3:1 depth-to-diameter ratio and deeper. “The deeper it goes, the more chance there is to have some drift in your drill,” said Allied Machine’s Miller. He added that it’s common to have 0.001" of drift per inch when drilling, so if, for instance, a 4"-deep hole has a straightness callout of within 0.002", it will require straightening via boring prior to reaming.

According to Wahlstrom, the most common mistake part manufacturers make is not leaving enough material in the hole for finish boring. As a result, the tool pressure pushes the tool sideways off the workpiece, causing chatter. “Conservatively, 80 percent of my technical calls end up being from customers that have not left enough material in the bore,” he said.

Compared to reaming, finish boring requires more material. Wahlstrom’s rule of thumb is to leave about a third more material than the radius of the boring insert’s cutting edge. Therefore, if the insert has a 0.015" (0.381mm) nose radius, the end user should leave 0.020" (0.508mm) of material per side of the hole. 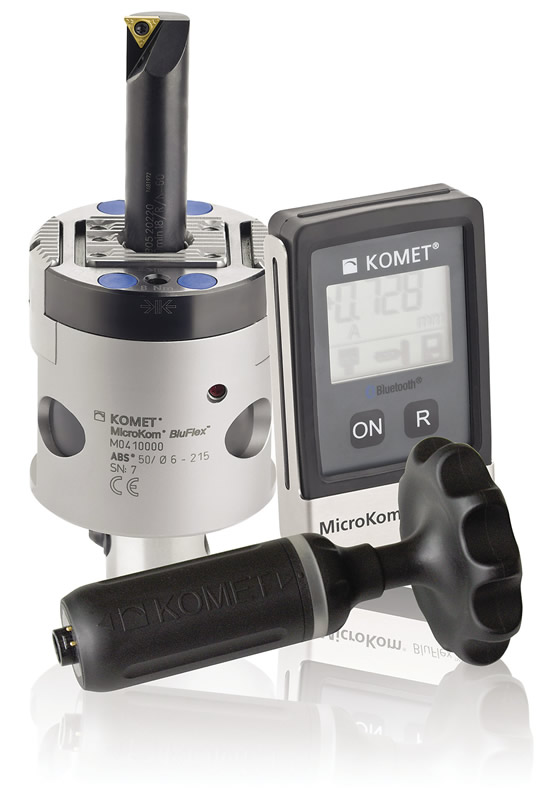 Courtesy of KOMET of America

KOMET's MicroKom BluFlex boring system uses Bluetooth wireless networking technology to communicate the fine-adjustment head's data to a magnetic-backed display, which can be positioned anywhere outside the machine. This enhances operator safety and convenience, according to the company.

Although sharp-edge inserts are available, the ones applied for boring typically have a corner radius, Monster Tool’s Dalhover noted.

Not having enough stock to remove is also an issue when reaming. This is because the cutting edge will not have adequate chip load and rubbing occurs, which negatively impacts the surface finish, explained KOMET’s von Rohr. “You need a permanent chip load on the cutting geometry; otherwise your tool is not stable and just cannot do what it is designed for. Not having enough stock pretty much makes every reaming operation fail right away.”

Not only will the surface show an unwanted glazing effect when too little stock is left for reaming, but Hassay Savage – Magafor’s Fletcher said workhardening can occur. “In some materials, you can workharden in one pass.” 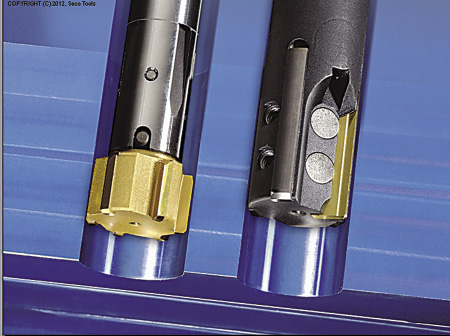 Runout is a major enemy of reaming, so applying the tools on an accurate and rigid machine tool is recommended.

He added that leaving too much stock also creates problems, such as eclipsing and loading the reamer to the point that it breaks. (See chart above.)

“While both styles of tools can finish the hole,” Smith said, “the design of each tool has significant advantages that can be optimized depending on the needs of the component.” CTE