Let’s say you want to machine your initials on your favorite Hummel figurine or cut the likeness of the school mascot on your daughter’s Little League helmet. How are you going to grip them? A conventional way to grip fragile, difficult-to-hold workpieces is to encapsulate them in some sort of potting compound, a time-consuming and wasteful process.

Rather than mix up a tub of two-part epoxy, consider photo-activated adhesive workholding (PAAW). Invented in 2003 by Edward C. De Meter, engineering professor at industrial and manufacturing engineering, Pennsylvania State University, PAAW was the result of research funded by companies such as Delphi Automotive, Caterpillar and others looking for better ways to grip delicate parts for high-volume manufacturing. 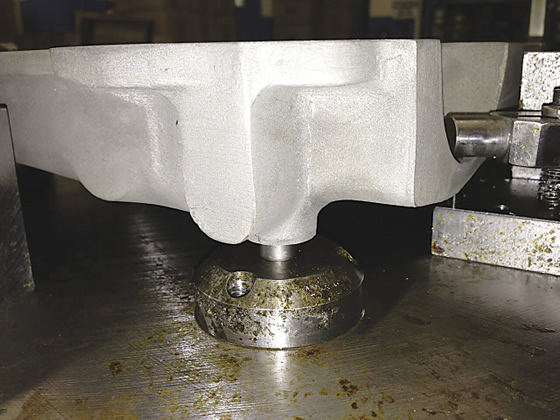 Grippers are placed where needed to support the workpiece during machining, while enhancing machine tool access. All images courtesy Blue Photon Technology and Workholding Systems.

After attending an academic talk on the mechanics of rigid-body fixturing, De Meter was intrigued with the workholding problems facing manufacturers. “I spent a lot of time looking at clamping deformation and understanding where to put supports, how hard to clamp in order to keep the workpiece from slipping and how to achieve sufficient frictional contact between the different surfaces,” he said. “The bottom line with mechanical clamping systems is you have to deform the workpiece in order to hold it. You can’t fight physics.”

De Meter had long considered using adhesives for workholding,and even tried Super Glue, but was unable to overcome the long cure times and poor gripping power of air-cured adhesives. While thumbing through a catalog in the engineering library one day, he stumbled across an article about ultraviolet-light-curable adhesives and soon realized he was on to something. He designed a “gripper” system, which uses UV light to quickly cure small amounts of adhesive placed between a workpiece and gripper. A laser heats the bond after machining, making the adhesive soft enough for removal. Penn State submitted U.S. and foreign patents on the gripping system, and De Meter got busy promoting it. 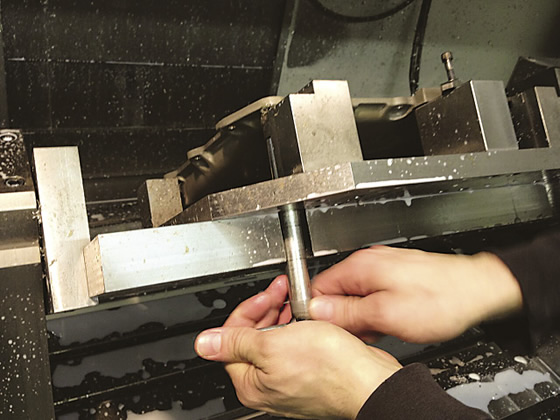 To release the workpiece after machining, simply turn the gripper a quarter turn counterclockwise. The localized torque instantly shears the adhesive bond.

Fast-forward 9 years. During that time, De Meter worked with several companies to commercialize his system and met great success with aerospace firms that used it to grip airfoil and turbine shapes. He and Mike Powell, president of custom fixture builder Master Workholding Inc., Morganton, N.C., even improved the debond process, ditching the laser in favor of a simple “twist-off” mechanism. However, De Meter’s gripping system never took off as he and the university had hoped, and he’d largely put the project on hold and moved on to other research.

Enter Dan Billings. A designer at GE Aviation, Billings learned of De Meter’s invention and, recognizing its potential, moved to capitalize on it. In 2013, he and De Meter formed Blue Photon Technology and Workholding Systems LLC, Whitehall, Mich. Tom Kelly, vice president of customer development at Blue Photon, said the core of the company’s business remains in the aerospace sector, where the gripping system is used for grinding, milling, EDMing, parts inspection and laser drilling, but the customer base is quickly expanding. 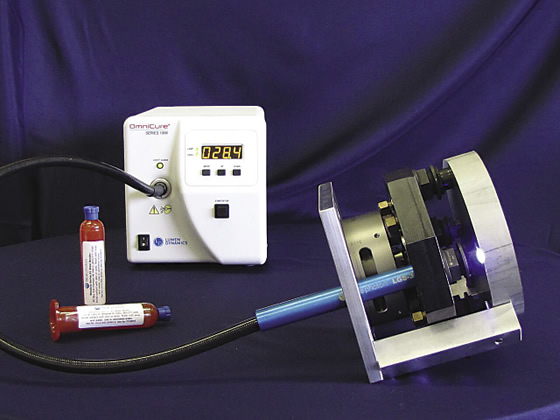 The UV light is activated for 30 to 60 seconds, depending on the joint thickness and required holding strength.

The system has been modified somewhat since De Meter’s original design. Blue Photon still uses the grippers and proprietary UV-curable adhesives, but these have been incorporated into a transfer tool methodology mounted on a zero-point fixturing system. Depending on the configuration, a starter kit costs $10,000 to $15,000, although Kelly said the individual gripping components and adhesives can be purchased separately.

“Once you have the UV light source and hardware, the ongoing costs are low,” Kelly said. “Depending on the workpiece and adhesive gap thickness, which can range from 0.02 " to 0.125 ", you can figure on 100 to 200 applications for each 30cc tube of adhesive, or roughly $2 per gripping application. In higher-volume applications, the adhesive can be supplied in larger containers, which can lower the adhesive cost significantly.”

If you’re ready to throw away that old tin of potting compound, give Blue Photon a call. CTE