While some shops shy away from difficult projects, others welcome them. According to Bob Perkins, president of PDS (Precision Defense Services) Industries, Irwin, Pa., the company has built its business on doing things others can’t do.

Bill Krause, director of engineering and estimating, described the shop’s approach simply: “When a customer comes to you with a problem, it’s time to listen.”

For one complex aerospace component, the production volume was one. A few years ago, Lockheed Martin Space Systems came to PDS with a problem. To launch the last example of the Titan missile, the company needed one copy of a component called an oxidizer housing.

The approximately 10 "-dia., 12 "-long housing presented a long list of challenges. More than 140 dimensions were specified, many of which had total tolerances tighter than 0.005 ". Some true position tolerances were 0.002 ". In addition, flange configurations on the ends of the part were angled at 15° from a common centerline. “You prefer part surfaces to be square, perpendicular and parallel, so when you get a part like this, it just complicates how you go about manufacturing it,” Krause said.

Lockheed told PDS that the part’s original vendor declined to make the housing again, claiming that new fixturing alone would cost in excess of $50,000.

PDS was only given 2-D paper drawings of the housing. “It is one thing to look at a 3-D model; it is another thing to look at numerous drawings as long as the table with 20 section views,” Krause said. “When you look at real busy drawings, you wonder what you could be missing.”

The PDS team concluded it could handle the job. “It was about developing a process that would yield a part that met the drawing,” Krause said. “Quality was the goal.”

Lockheed said it would supply five of the proprietary forgings to yield one good part and purchase any additional acceptable parts.

PDS decided to first process a mockup part from a 10½ "-dia., 14 "-long piece of 6061 aluminum. “We would program it, machine it, inspect it, assess the issues we ran into and make adjustments before we got into machining the expensive, proprietary material,” Krause said.

For the first operation, the workpiece was chucked in an A-axis indexer mounted to the VMC’s machine table. The rotating A-axis enabled access to multiple part surfaces without reclamping. “If you can figure out how to fixture the part and machine as many dimensions as possible in one machine setup,” Krause said, “the better your feature-to-feature relationships will be.”

The first operation began with rough profile milling on the side surface of the cylinder to prepare for a 9.2 "-dia. bore, which would eventually go through the part’s center. Then the housing was indexed 180° and the same roughing was performed on the other side. A 2 "-dia. inserted drill next roughed a through-hole, followed by a roughing endmill that opened the bore to its full diameter. A variety of features were then milled, with indexing of the A-axis to assure consistent relationship among them. These roughing operations left a minimum of 0.050 " on the part for subsequent finishing.

Krause said the object of the first fixturing was to machine the bore and all features relative to it. “Once we established that bore on both sides of the part, we fixtured from the bore in later operations.” After every operation, the machine operator notified PDS’ QC personnel to verify the dimensions.

For the second operation, the part was clamped in one of two fixtures PDS designed and built. Again in the VMC, the fixture was mounted on the A-axis, this time perpendicular to its prior position and using the central bore for location. Then the flange and associated diameters were rough profile-milled on one end. Machining also included drilling eight 0.50 "-dia. holes and a 0.555 "-dia. central hole and rough milling four through-slots. The part then was indexed 165° for machining of the same features and holes on the other end, this time 15° off perpendicular to the cylinder axis. 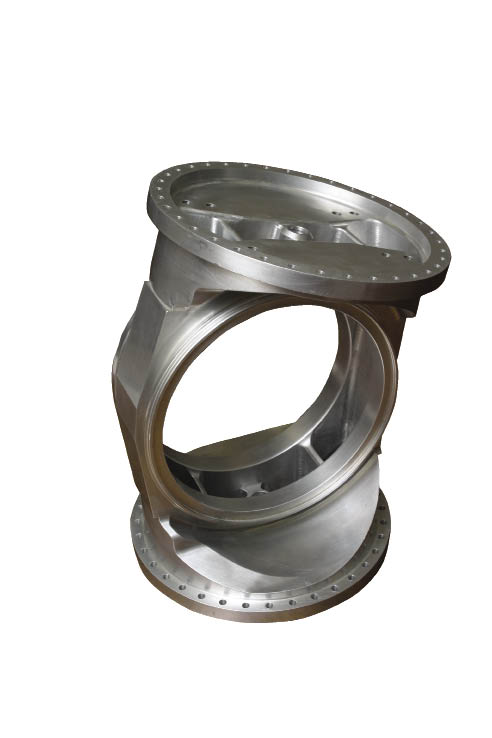 Courtesy of B. Kennedy

Specifications covering more than 140 dimensions, as well as flange configurations on the ends of the part angled at 15° from a common centerline, made this approximately 10 "-dia., 12 "-long missile component a challenging project for PDS Industries.

After that, the shop performed finishing on flange features, angled surfaces and through-slots on that end of the part. Thirty-six 0.212 "- to 0.218 "-dia. holes were drilled around the flange periphery, and the eight holes previously drilled were taken to final diameter and depth and countersunk. Then the housing was indexed 165° to its starting position and all the finishing was repeated on the other flange.

The fourth operation was accomplished on a HMC using a right-angle head. The part was fixtured so the head had access to the inside of the flange on one end of the part. The central boss and ribs between the slots were machined. Then the housing was refixtured to provide access to the other end, and the finishing was repeated.

In the final operation, again on the HMC, the remaining dimensions and angles were finished on one side of the part, after which it was turned over to perform the same operations on the other side.

When the mockup part was completed, inspection determined that it was in full compliance with all dimensions, tolerances and finish requirements. “We machined the five forgings supplied to us,” Krause said, “and all the housings met the drawings without any deviation.” CTE

For more information about PDS Industries, call (724) 863-1100 or visit www.pdsindustries.com.

About the Author: Bill Kennedy, based in Latrobe, Pa., is a contributing editor for CTE. He has an extensive background as a technical writer. Contact him at (724) 537-6182 or billk@jwr.com.