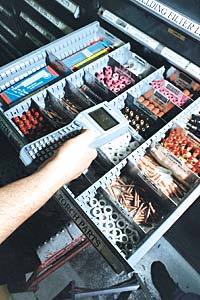 Using tool management software is as easy as pointing a portable scanner at a labeled tool or drawer.

So you’ve been thinking about trying a software-based tool management system, but you’re not sure exactly how to go about finding one. Should you buy the software with all of the bells and whistles or just a basic package? Should you outsource your tool management to an external company or do it all in-house? Who do you contact? Where do you begin?

What is Tool Management Software?
Tool management and software go hand in hand these days. Many shops choose to organize their tools the “old-fashioned” way—by manually tracking tools in the toolcrib and on the shop floor. But this time-consuming approach can be expensive if you’re using a substantial number of tools.

More and more shops are using tool management software to track tools instead, decreasing the chances of tool “stockpiling” by employees and increasing productivity. In the long run, using software will save your company money by making it more efficient and more productive.

According to Software Integration Services Ltd., the Edmonton, Alberta-based manufacturer of Tool Hound software, the cost savings can be enormous. It estimates that an average user might save over $80,000 per year by implementing Tool Hound. SIS considers an average user to have an annual tool budget of $50,000 or higher, 20 percent of which is spent on tool replacement.

The exact amount of savings will vary according to a user’s tool volume, current costs and existing equipment.

Who Needs It?
Bill Richardson III, a production engineer at Richardson Manufacturing, Springfield, Ill., knew that his company was in desperate need of a more advanced tool management method.

“The old crib was a mess,” he said. “We had no inventory control, there was a lot of panic [when] gathering tools together and lots of downtime on machining centers and workstations.”

AutoTAS provides comprehensive information about each tool, including stock location, cost, supplier, cutting performance, tool life, the production machines it is used on and the components it is used to manufacture. According to Sandvik, AutoTAS can increase machine uptime by as much as 50 percent and can reduce inventory by almost 40 percent. Richardson said that his company’s machine downtime has decreased by 40 percent since AutoTAS was implemented.

Making the decision to utilize tool management software can have a significant effect on the workplace.

“One of the biggest ways that AutoTAS has helped us is knowing where the tools are—knowing our inventory,” said Richardson. In the past, the company would often order tools that it already had in stock. The previous tool management system could not track tools within the facility, so there was no way of knowing where tools were or if they were being used.

In a typical setup, tools are organized on shelves or in cabinets in the toolcrib. They are sorted by type of tool, diameter, height or any number of other criteria. It’s best to be as specific as possible when dividing tools. The drawers—or the tools themselves—are labeled with bar codes or radio-frequency I.D. tags.

Each time an employee needs a tool, the toolcrib attendant scans the bar code or I.D. tag with a portable hand scanner and turns the tool over to that particular employee. Information about the tool is then sent to a PC (Figure 2). Most companies use PC-based systems, but Todd Harrison, systems administrator at W.G. Strohwig Tool & Die Inc., Richfield, Wis., made a slightly different choice.

“The system we purchased runs off a UNIX server,” he said. “Since we [already] had a UNIX system in-house, we decided not to go with a separate PC.”

Figure 2: Toolcrib attendants can track an employee’s tool activity, including how many tools he uses and which machine he is using them on.

The cost of a software-based tool management system varies widely, according to a shop’s size, tool volume and existing equipment. Strohwig spent $6,000 on software, $2,500 for each scanner and another few thousand dollars for additional items such as a bar code printer, shelves and cabinets.

Alternatively, some companies distribute their tools via vending machines scattered throughout the shop. The concept is simple: the machines are very similar to the vending machines used for snacks. Users walk up to the machine and punch in a code for the item they need. Most machines require users to swipe an I.D. card or punch in an employee code before dispensing the item.

This is a particularly good option if you don’t want to go to the time or expense of implementing a complex software-based tool management system. Some companies even lease the machines and outsource all of the tool management responsibilities to an external firm (see below).

Yet another option is off-the-shelf software, such as Crib Master. It can be used with an existing toolcrib but doesn’t require the purchase of additional equipment, such as bar code printers, I.D. tags, scanners or vending machines. The list price for Crib Master is $995.

The Payoff
A software-based tool management system offers lots of benefits, including detailed tool tracking and comprehensive reports, according to Richardson.

“It can tell you how many drills you used on a certain job, on a certain operation [and] at a certain machining center,” he said. “Every afternoon it creates a purchasing list so your inventory stays right where you want it to stay.”

The reporting function has also been a big plus for Strohwig. “The reports generated from the system tell us what we need to reorder or follow up on,” said Harrison. Strohwig’s purchasing is handled on a separate computer system.

“The reporting capability of a tool management system puts me in control of all of our perishable inventory,” he said.

Making the Transformation
Converting your old toolcrib to a software-enabled one can be somewhat time-consuming, according to Richardson. He has spent approximately six months making the transition so far, and he’s still tying up loose ends.

“We really sat down and looked at the inventory we had and the tools we used,” he said. “We tried to get pretty picky about it.”

According to Richardson, all of the time spent organizing the system was well worth the effort. Finding tools is now faster, easier and more accurate than it was with the old system. By breaking everything down into the smallest possible category, you can gain more insight into how specific tools are used, he said.

Strohwig also spent a lot of time setting up its coding system, since its old manual system was only organized by broad tool descriptions. For instance, all of its 1¼2" drills were grouped together, as were its 3¼4" endmills.

“The initial input is a tedious but critical step to implement a tool management system,” said Harrison. “It took us about three months to get up and running efficiently.”

The Bottom Line
Many of the benefits of an automated tool management system will be obvious almost right away, including convenience and superior tracking capabilities. Some others—such as long-term savings and increased productivity—might not be apparent for some time, said Richardson. He said that his company’s tool reordering decreased by 500 percent after purchasing AutoTAS.

Richardson added that it required some effort to convince the owners of the company to make the investment in AutoTAS, because a tool management system is not a thing you buy that starts making money back right away. “It was a thing that we’ve done without for years, but it’s going to pay for itself within six or seven months.” 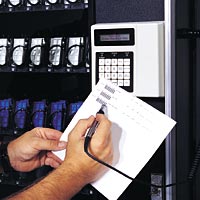 Customers lease MTS’s vending machines, which are placed strategically throughout the shop to reduce employee access time. The vending machines communicate with a central PC, which electronically transmits the inventory database to Machine Tool Supply each night. The needed inventory order arrives the next morning. In addition, customer management reports tell employees at the shop how the system is performing.

According to Steve Pixley, president of MTS, this arrangement is ideal for companies that spend at least $10,000 a month on cutting tools. Pixley said that the benefits of this type of system can be tremendous. One advantage is that it decreases costs.

“What we really attack is the carrying cost, the cost to issue a purchase order, receive an order and process it,” he said. “We can either slash or eliminate those costs.”

The largest savings, he said, is increased machine uptime by decreasing the “walking around time” spent looking for missing tools while an expensive machine sits idle.

High-volume shops can choose to combine a traditional toolcrib with MTS’s system. In addition, some shops do the vending machine approach on their own. The basic system, which includes a single vending machine, costs about $20,000, according to Pixley. Extra vending machines can be added for about $8,000 each. If you do want someone else to take over the system, you may need to search a little. Pixley cautioned that not all AutoCrib distributors offer this kind of vendor-based tool management system.