Versa-Fab Inc., New Kensington, Pa., is a busy fabrication, machining and finishing business. The company serves a variety of customers while emphasizing the manufacture of sheet and stainless steel cabinets for the power products and distribution industry.

Vice President James Cullen said the business may appear simple, but “we put through 700 different part numbers and manufacture and ship more than 20,000 parts in a month.” As a result, the company is constantly looking at where it can employ flexible automation to generate efficiency. 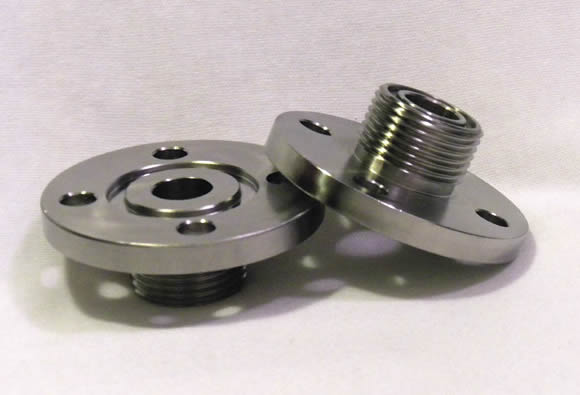 Versa-Fab’s machine shop supports the company’s fabrication operations and makes parts for external customers. “We are a very robust job shop,” said Matt Aubele, machine shop manager. Successfully bidding on outside jobs requires the shop to be cost-competitive. Aubele said one job symbolizes the company’s efforts to automate whenever possible. That part is a 17⁄8 "-long, 316 stainless steel gas hose seal. It has a maximum diameter of 23⁄8 ", a 1-14 UNS thread, two grooves for O-ring seals and connects a gas hose to a tank.

Although the part would be well-suited for a live-tooling machine with a Y-axis and C-axis, the shop did not have that kind of equipment when bidding the job. “We had to figure out a way to be competitive,” Aubele said.

They did. Versa Fab efficiently processed the part by combining a bar-fed SL20 Haas lathe with a Haas VF3 vertical machining center.

Working with a part print, Aubele programmed the job in Mastercam. Versa-Fab machines the seal from 2 3⁄8 "-dia. bar stock, which is sawed into 3 ' lengths and loaded into the SL20’s bar feeder. The first operation is turning the bar’s diameter to 2.142 ", then stepping in to turn the 1 " major diameter of the thread, using Iscar CNMG-432 inserts run with flood coolant at a 600-sfm cutting speed and a 0.008-ipr feed rate.

To machine the 0.088 "-deep × 0.051 "-wide O-ring groove on the front of the part, the shop chose an Iscar Picco 0.030 "-wide, solid-carbide face-grooving tool. The shop only runs the tool at 200 to 300 sfm and 0.001 ipr. “We’ve always run it very conservatively because it is on a bar-fed machine and there is no one standing there,” Aubele said. “When I started in this business as a programmer, I always wanted to push a tool as hard as it would go. I have learned it’s not always the best to push it so hard. Slow and steady isn’t hurting anything because the machine is just running by itself.”

A 3 '-long section of bar stock produces 32 parts. To run unattended, the shop uses redundant tooling in the machine turret and programs tool changes according to part volume. “Tool 1 is our roughing tool, and we also have tool 10 loaded as a roughing tool. We know we get two bars out of roughing tool, so when it goes to the third bar it automatically switches to tool 10,” Aubele said.

Aubele said 316 stainless can be “pretty nasty to cut. It’s gummy, it likes to stick to the tools and snap inserts off. We have it dialed in pretty good, though.” Flood coolant is essential, he added.

Efficiently fixturing the parts in the VMC was another challenge. “The best way we found was to use Kurt Double Lock vises fitted with custom soft jaws,” Aubele said. “Four of the vises are mounted on the machine table and each set of soft jaws holds four parts, enabling 16 parts to be processed at a time.”

Aubele said: “We took advantage of the ramping capabilities of Mastercam. Instead of just dropping an endmill into 316SS and trying to plow around there, we ramped that O-ring groove. The endmill comes down to Z zero, and, as it interpolates around the part, it ramps in at 1° or 0.050 " every time it goes around. At the bottom of the groove it stops ramping. It does one side of the groove and then the other side, and one endmill usually lasts long enough for a run of 250 parts.”

Four holes are then drilled in the part flange with a Guhring 0.300 "-dia., through-coolant carbide drill run at 400 sfm and 0.008 ipm. The operations on the mill “go through pretty quick,” Aubele said, “and we found the operator couldn’t keep up with the machine. He would still be deburring parts while the machine sat idle, waiting for him to change the parts.” As a result, the shop added a 45° solid-carbide chamfering tool, run at 400 sfm and 20 ipm, followed by a 1 "-dia. carbide brush.

“Because stainless is gummy and likes to roll burrs over, we come back in with the carbide brush and clean the O-ring groove and the entire face of the part after chamfering the holes,” Aubele said. Now, when the parts come out of the VMC, the operator performs any further deburring that may be required, cleans the parts and packages them for shipping. Aubele said the current blanket order for the part is about 2,500 pieces, usually machined in lots of 150 to 200.

Aubele considers the bar-fed machine to be the largest contributor to the process’s efficiency. “The bar feeder makes us competitive. It runs lights out. That is, in essence, free labor.” Automating and consolidating processes whenever possible, he said, “is the way this company is going. We are thinking toward the future.” CTE