Robot to the rescue

Even as North American manufacturers and other companies continue to buy robots at record rates, hundreds of thousands of companies that are suitable candidates for automation have yet to install even a single robot, said Jeff Burnstein, president of Association for Advancing Automation, also known as A3.

The Ann Arbor, Michigan-based organization reports that North American companies set a single-quarter record with the purchase of 11,595 robots worth a total of $646 million during the first quarter of 2022. Compared with the same period last year, sales to the metals industry, which covers any type of metalworking activity, increased 40%.

Automotive customers no longer account for the majority of robotic applications. “Traditionally, small and medium-sized companies, who are the backbone of American manufacturing, associated robotics with something that was for big companies, especially automotive companies, because they were perceived to be very costly and difficult to use,” Burnstein said. “The big shift in our numbers has been that the general industry portion has become larger than the automotive-related portion. The first time we saw it was in 2020, and it accelerated in 2021.”

He said the reasons for the shift are lower costs and that robotics has become increasingly easier to use.

However, a shortage of workers is preventing some small and medium-size part manufacturers from investing in automation because they struggle to hire people who can quickly understand and implement the needed automation equipment, Burnstein said. That said, there’s a double-edged sword at play because those companies also cannot attract and retain workers to do the dull, dirty and dangerous tasks that are well suited for robots. “Some companies have no choice. If they can’t find people, they have to turn to automation.”

An option for a manufacturer that is unable to introduce automation using internal resources is to hire an integrator, such as Automation Solutions LLC in Germantown, Wisconsin. According to Automation Solutions, it is a “boutique” company that optimizes manufacturing productivity through custom-engineered system control and robotic integration.

“We are customizing an automation project tailored to the individual needs of the customer,” said President Steve Nordness. “We will go out to the
customer’s facility and look at their idea of what they need to have automated. Maybe they don’t have an idea and just say, ‘This is a mess. What can you help us with?’ We will get into a think tank and start tossing out ideas about what are the options for using robots or simple PLCs (programmable logic controllers) and HMIs (human-machine interfaces).”

Automation Solutions will generally start a conversation about how a customer loads and unloads parts into and out of a machine, Nordness said, noting “that’s something we do really well.” He added, however, that stressful challenges may arise when developing solutions for applications that the integrator has not previously seen. “We are solving new problems all the time.”

Regardless of the automation scenario, one requirement for all customers is a quick return on investment. A lot of Automation Solutions’ projects must deliver ROI in one year, he said. “What we found is that usually projects get funded when the ROI is below three years.”

The payback period can get cloudy when an end user loses focus of the core objective, potentially over automating a process. For example, Automation Solutions reached an agreement in principle for the design, price and projected ROI of one customer’s process, Nordness said, but then the manufacturer started talking about adding conveyors and additional robots to transport parts from shipping containers into the machine.

“It skyrocketed the cost of the solution,” he noted. “There was no ROI for that piece of this process. We just explained to the customer that although it would be a nice thing to do, we want to focus on the things that have the most ROI.”

The company’s solutions frequently leverage collaborative robots, which offer scalability and affordability, he said. There is a cost, for instance, of placing a barrier around a robot that cannot work collaboratively with humans. “If you have to put a fence around a robot and you don’t have the room to do that,” he said, “you have to get more room, and sometimes that’s not possible. Factories can’t put an addition on to house a robot.”

In addition, the process for reprogramming and repurposing a cobot is quick and straightforward. “If you’re running some process and you have the cobot loading that process, and then your business changes and you don’t need that process anymore, you can repurpose that cobot to do something else,” Nordness said. “And we would certainly be willing to help with that.”

A cobot, however, is not suitable for all robotic applications. When parts need to be lifted that are heavier than the capacity of a cobot and at a rate faster than a cobot can safely transfer parts, a traditional industrial robot is needed. 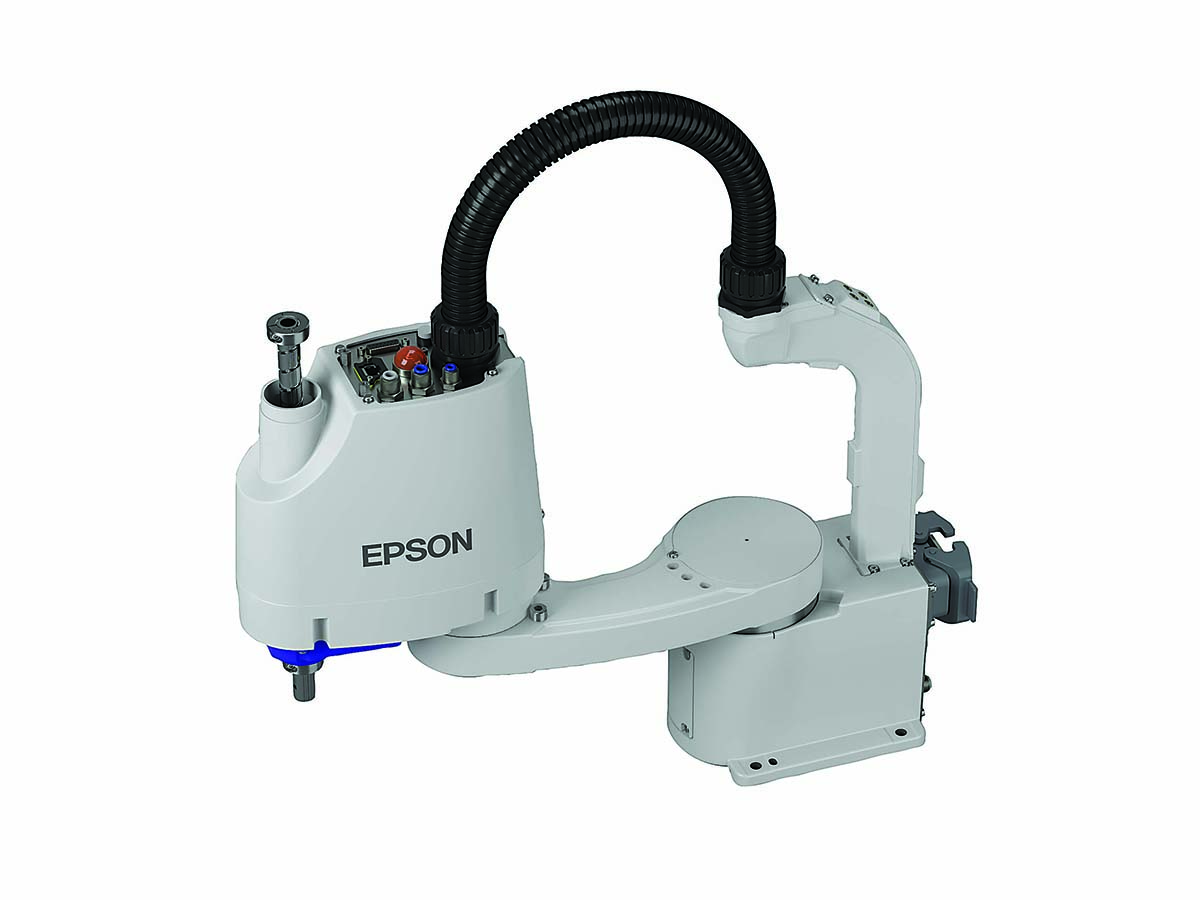 “It’s not so much that a certain type of robot is better than another one,” Burnstein said. “It just depends.”

“We have three different tiers of performance for customers as the applications get harder and harder,” said Product Manager Aaron Donlon.

The first tier is the T-B series, which is suitable for most pick-and-place applications, in which the required speeds and level of accuracy are “pretty reasonable” and the work environment is not too harsh, he said. As the performance needs and environment become more extreme, end users can select from the company’s LS-B series, or middle-range offering, with payloads up to 20 kg (44.1 lbs.) and 1 m (3.3') of reach.

“The top of the line is currently our G series,” Donlon said, noting that those robots were introduced 10 years ago. “The performance at that time was mind-blowing, and it really changed the market. That being said, as we entered into a new decade, the performance is getting even more extreme as the operations are getting more important and the environments are getting more challenging.”

For the GX series, he said Epson switched from a 400-W to a 750-W motor for joint 1 on the GX8, which is the joint at the base of the robot. “So a lot of the speed comes from that one, along with joint 2. They work together to get the tool center into position.” In addition, joint 3 moves the quill up and down, and joint 4 handles rotation.

“But it’s not just the power,” Donlon continued. “If it was power itself, you would have a machine that would be fast but not precise, and we are the precision automation specialist. We utilize what we call Gyroplus technology to handle the power and vibration that comes with it naturally.”

At the core of this technology is an Epson-manufactured quartz crystal internal inertia sensor tied directly to the servoloop that enables knowing the exact amount of vibration on a robot arm and then damping it.

At a job shop environment where coolant is applied and mist is in the air, along with dust and other noncorrosive material, Donlon recommends the version with IP65 protection standards for electrical enclosures. A popular option is the Intelliflex parts feeding system, which uses vision to locate a multitude of different parts. “That helps people with a high-mix, low-volume environment,” he said. “That’s what makes the most sense.”

Like cobots, Donlon added, SCARA robots can be repurposed. “That’s the beauty of robotics in general,” he explained. “You can teach it to do something today, and tomorrow your application changes and you teach the robot to do something different. Maybe you change the end-of-arm tooling, but the versatility of robotics has always been a huge selling point.”

He said robots also enable manufacturers to improve part quality and therefore their competitiveness and profit. “Now you are not spending all your time running around in circles,” he said, “handling QA and angry customers.”

Then there’s a robot’s ability to load and unload machine tools while allowing skilled workers to perform more mentally demanding tasks, such as quoting jobs and programming toolpaths. “That’s one solution to the labor shortage that you’re seeing in machine shops,” he said.

For those hundreds of thousands without any automation that might be considering or installing their first robot, Donlon said it’s important to understand the environment where the robot will be functioning and the level of technology with which workers are comfortable. “They can dial it up or down,” he said, “depending on what they are familiar and comfortable with from a programming and control standpoint.”

It is also critical to not bite off more than you can chew. “One of the keys to getting started is to pick an application that you can be successful at,” Burnstein said, “because that oftentimes gives you the confidence to increase your automation once you have some positive experience with it.”

While it has been quite some time since the first industrial robot was installed in 1961, interest in automation continues to gain steam, he said. For example, he noted that A3’s Automate trade show, which was held June 6-9 in Detroit, attracted more than 20,000 attendees. “There is a thirst for information about how to successfully automate,” he said. 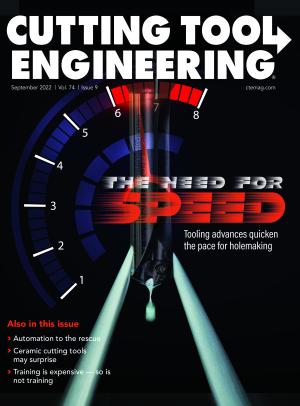