It could be the boring mill purchased during the Watergate investigation—the mill that cost $1 million back then but would cost five times that today. Or maybe it’s the commodity machining center that would still produce good parts if you could only make the display turn on.

No matter how old the machine or how much it cost, there could be good reasons for keeping it around. In many cases, doing so can be justified by adding a new control and updating the electronics.

Dave Eldredge, president of control system provider MachMotion, Newburg, Missouri, said you should ask yourself a number of questions before deciding for or against a retrofit control. “What’s the lead time on a new machine?” he said. “Assuming your old one was kept busy, you probably can’t wait a few months for a replacement. What about the cost? A good rule of thumb is that a retrofit starts to make sense at one-third the price of a new CNC.” 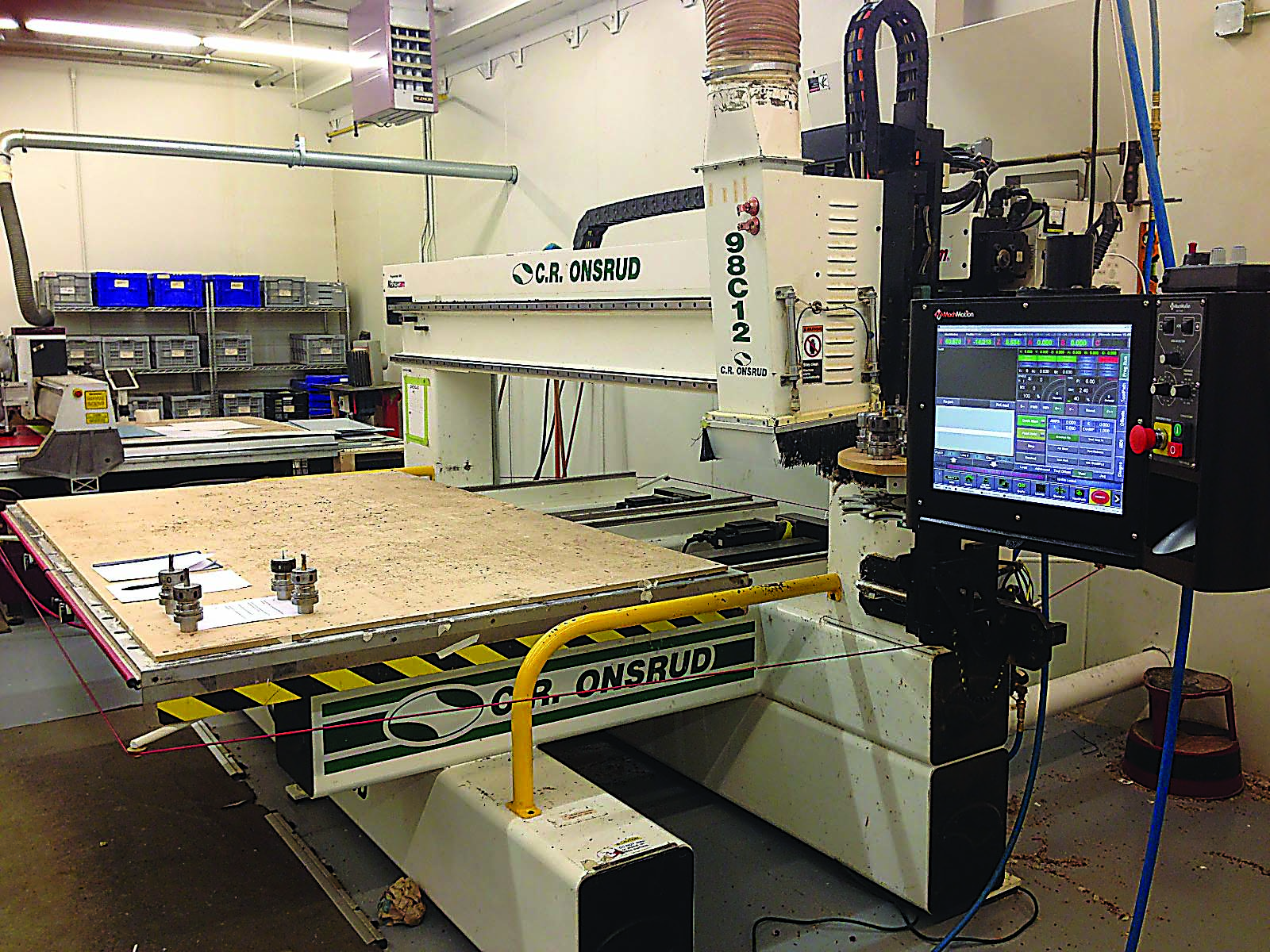 CNC routers, waterjets and plasma tables are just a few of the machine types suitable for retrofitting. Image courtesy of MachMotion

Then there’s the disruption to consider. Say you’ve been running parts on a machine for 20 years. All the tooling is set, the processes are established, and the equipment is sitting in the back of the shop surrounded by newer machines. It’s possible that, by the time you figure in the rigging costs and downtime needed to pull that asset and retool everything, it would be much less expensive to retrofit the existing machine with a new control.

If you’re reminded of the time that you souped up your ’67 Chevelle with a 4-barrel carburetor and high-performance camshaft only to blow up the transmission 2 months later, Eldredge said the analogy doesn’t fit. “As long as the machine is mechanically sound, there’s no risk of destroying the ballscrews or any other components despite the inherently higher performance realized with a replacement control.”

This might be the best reason to breathe fresh life into a weary CNC machine: Eldredge said you can expect a revamped machine to crank out far more parts per hour than it ever did previously and also to be much easier to operate.

“We offer a conversational interface with full 3D display capabilities,” he said. “You can walk up to the control, quickly sketch your part or enter in dimensional data, simulate the toolpaths, post the code, and you’re ready to go. If you want to program with a CAM system, that’s fine too. It’s the same G code you’ve been running for years, but you’re now able to run it on a much more powerful processor, with servos that are far more responsive as well.”

It’s clear that a modern central processing unit and servomotors might take old iron to unheard-of performance levels, but what about newer machine tools? Eldredge said MachMotion recently retrofitted a 3-year-old commodity CNC machine with a new control. The customer was “blown away” by the resulting performance improvement.

“Bringing an old machine back to life is certainly a valid reason for replacing its control and electronics, but it’s still an old machine, and you’re going to achieve only so much with it,” he said. “But taking a relatively new piece of iron, one with a high-speed spindle, for instance, and freshening up the front end with cutting-edge technology—we see that as a very viable ROI for many manufacturing companies.”

If the machine tool in question is a Fadal and you’re technically savvy enough to plug in a cable TV box, you might want to give Walter Calmette a call. He’s president of Sun Valley, California-based Calmotion LLC, which specializes in improving the performance of the familiar brand of white-and-blue machining centers.

“It’s super easy to do,” he said. “You pull out the main CPU and axis cards, replace them with ours, and in most cases you’re up and running within a couple hours. The difference is that you now have a processor that’s 20 to 30 times faster than the one used in the legacy Fadal control.” 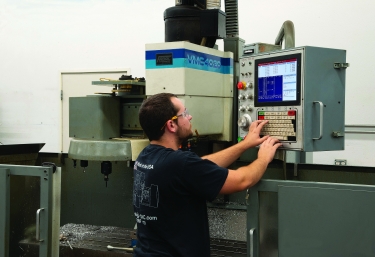 No matter how old the Fadal, Calmotion has a way to make the control and electronics new again. Image courtesy of Calmotion

For example, Calmette said one customer retrofitted a 20-year-old Fadal purchased at auction. After investing roughly $8,000 on control components and a new servomotor, the customer was able to cut cycle time in half when machining mold cavities.

There was no need to reprogram any of his existing jobs. Unlike the old control, Calmotion’s 527F CNC boasts Ethernet and USB capability and has enough onboard memory that drip-feeding large programs is no longer necessary. Replacement monitors and keyboards are available, as are 4th- and 5th-axis control cards. Furthermore, the Calmotion control works on any Fadal machine ever made, all the way back to those with single-digit serial numbers.

“Fadal once had one of the leading controls, but sometime during the ’90s they allowed their technology to languish,” Calmette said. “We picked up where they left off, with faster processing speeds and greatly improved ramping control. There are a lot of these machines out there. They’re reliable and easy to work on. As long as you can refresh the control from time to time, there’s no reason to take them out of service.”

From Acorns to Turnkeys 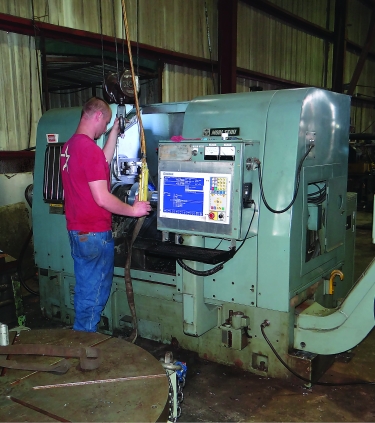 Control retrofits are a great way to bring mechanically sound CNC machines up to speed quickly.  Image courtesy of Centroid

“We’ve put our controls onto jig bores, gundrilling machines, routers, waterjets, vertical turret lathes, Hardinge tape chuckers—it’s a long list,” he said. “We just finished a job for a plywood manufacturer, retrofitting their single-axis roller grinders with 3-axis controls and custom conversational software. All the operator has to do now is enter a few values, and the machine takes care of the rest. These machines cost $1.1 million new, and we were able to modernize them for about one-tenth that amount. It was a no-brainer.”

In another case, Centroid updated a “really big Cincinnati bed mill that’s beefier and stiffer than anything you could buy today” with new electronics, extending the life of the machine for 15 years and saving its customer roughly $20,000 annually in repair costs, McCulloch said.

As with the other CNC suppliers in this article, Centroid’s controls can be easily installed by the end user. There’s even a $299 “Acorn” CNC kit for customers who want to build their own machine. For those who’d rather leave the electronics to someone else, the company offers on-site installation and training. There’s also a network of factory-certified machine tool distributors, including one in Chicago that promises to upgrade Haas CNC machines in just 8 hours.

“There are so many high-quality, heavy-duty machines that will last forever as long as you keep them clean and lubricated,” McCulloch said. “Those are the cherries that you want to pick for retrofitting because you get really good results when you’re finished. You’re not fighting mechanical problems; you’re just fighting and repairing old electronics every day. A new control eliminates all that.”